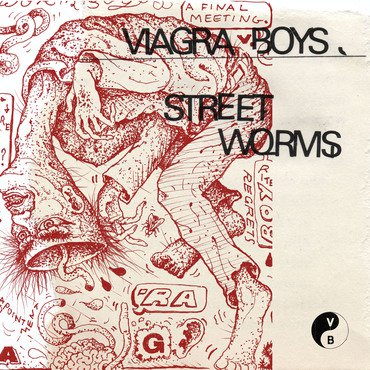 The term “batshit crazy” is bandied around all too freely these days, but, ladies and gentlemen, let me introduce you to our new Swedish friends, Viagra Boys. If ever a band deserved such a tag, it’s them. They’re also unmitigatedly gripping throughout the course of Street Worms, the sextet’s gloriously off the wall debut album.

Perhaps the best place to start is with the recent single, ‘Sports‘, comparable to Iggy Pop‘s 1999 collaboration with Death In Vegas, ‘Aisha‘, but over a pulsating ‘Peter Gunn‘ style bassline. The lyrics are equally off-kilter, frontman Sebastian Murphy’s low drawl uttering such bafflingly obtuse nothingness as “Baseball. Basketball. Weiner dog. Short shorts. Cigarettes.” It’s bloody marvellous too, Murphy’s vocals descending into chaos towards the end, like a seriously disturbed escapee from a mental hospital. This is immediately followed, rather bizarrely, with what appears to be a dog show voicover by the singer himself, accompanied by the kind of incidental background noises you might have found on Tom Waits‘s Swordfishtrombones all those years ago: “He wags his tail because he knows he is a winner. He is not a product of what is expected of a dog.” Well quite.

Songs like ‘Frogstrap‘ and ‘Slow Learner‘ suggest that Suicide and Gang Of Four may well have featured highly on the band’s radar when this was all coming to fruition, possibly even ZZ Top also, given the choppy guitar playing in places, but the whole thing generally throbs with such high intensity that it’s impossible not to be sucked in for the ride. And once the rollercoaster comes to a halt, you’re guaranteed to want to go back round again. Hmmm…bit Alan Partridge that last sentence, wasn’t it? Perhaps ignore that bit. Even though it’s true…

‘Shrimp Stack‘ is an absolute belter of a song, its boisterous post-punk rhythms almost turning into a Hi-NRG disco romp, were it not for its dark but sometimes humorous prose: “I put a towel in a bag with formaldehyde. I put that shit up to my mouth, and get really high” is followed not long after by the revelation that “I’m with your mom in the dirt.” This is one record you just can’t keep your ears off, wondering just where it’s headed next. And there are more surprises, as ‘Worms‘ brings the exhausting onslaught down to an ‘All Apologies‘ level, though you could probably argue that it’s more akin to a Mike Cooley composed Drive-By Truckers song if it had an upbeat Kurt Wagner on vocals: “The same worms that eat me will someday eat you too.” Thanks for that, Sebastian!

Overall, Street Worms is a real triumph, with only the odd lapse into self indulgence letting it down here and there, and the mind-bogglingly dreadful band name. Other than that? It’s a corker.

Street Worms is out now on Year0001 Records.