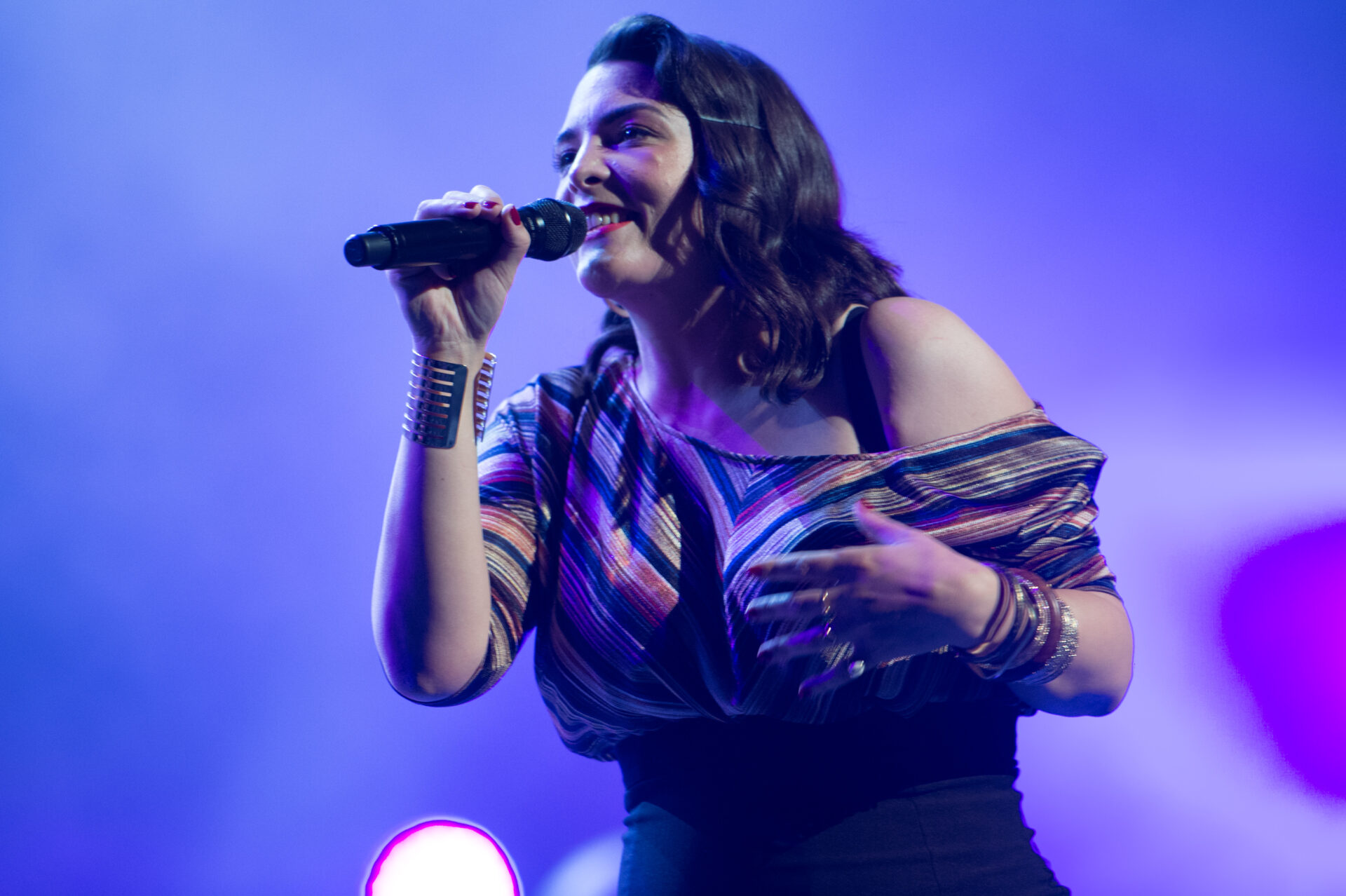 If colourful, feisty extravaganzas full of tropical rhythms and latin grooves are your thing, and you haven’t seen Caro Emerald performing live before, then what the heck are you waiting for? This is a good-time girl on a mission to make sure everyone else had exactly that – a good time with a capital ‘G’.

Before that, we had the magnificent fellow Dutch singer/songwriter Loren Nine performing a splendid solo support slot, armed only with an electric piano and perhaps her greatest weapon of all – a voice that was often reminiscent of Dionne Warwick at her peak, other times recalling slightly more modern contemporaries such as Dina Carroll or Vanessa Williams. You’d be forgiven for thinking Doris Day had strolled on for a piece of the action during her closing number. It was a lovely way to start, great compositions topped off with truly striking vocals, and it really set us all up for the main event.

I won’t bang on about my own recent personal problems too much here, but, suffice to say, it’s been a tough few months, so it’s to Caro Emerald’s eternal credit that those tropical rhythms and general beach party vibes made me feel as though I was still on holiday. Yes, yes, I know I only went to Butlins in Bognor Regis, Doctor Pedantic, but the point is that, in the ‘moment’, I could feel all my stress evaporating, fast and eventually forgotten.

Emerald herself plays a big part in this. It’s impressive how, for half the show, the audience remains sitting, albeit still applauding vociferously, but then, as soon as she says “I want to see you all dance. Come on, as soon as one of you gets up, the rest will follow,” and astonishingly, what happens next is exactly that. Everyone is dancing from thereon, and given the apparent average age of tonight’s audience, I find myself sincerely hoping that there are plenty of St. John’s ambulances standing by. But that’s what Caro Emerald does – she can inspire octogenarians to strut their stuff as if their rheumatism is no more troublesome than a slight sniffle, though I couldn’t help but notice that a few of them had lapsed into what amounted to a ‘Maybot’ dance. To be fair, I think I might have even caught myself doing it at one point too, before hurriedly checking round to make sure nobody else had spotted me, swiftly camouflaging myself against the sea of Tweed that surrounded me.

Seriously though, if there was anyone there tonight who didn’t enjoy it, I’d have to question whether they actually had a soul. Emerald is energetic and immensely likeable, wanting to involve everyone in this big, happy bonanza, and especially including the terrific musicians that accompany her, as she makes absolutely sure that every one of these performers gets their fair share of the limelight throughout the show. By the time we’ve reached the final curtain with an explosively brilliant ‘That Man‘, we’re all thoroughly invigorated and ready for an equally delightful encore. A real pick-me-up, if ever there was one.