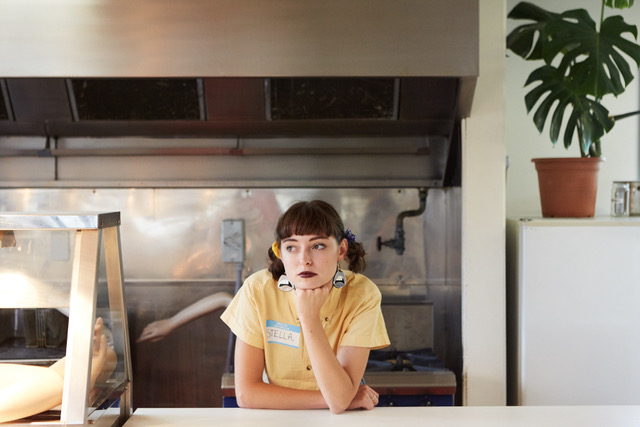 Stella Donnelly is one of the most entertaining people I’ve seen on a stage. At a time when – and I’m sorry to have to say this – too many artists look like they are merely going through the motions and would rather be somewhere else, the young Australian is from another era. She’s thoroughly engaging, exudes character and charisma, has a contagious personality, and clearly enjoys every minute of performing before an audience. And her singing voice is sweet and crystal clear. A couple of years from now she’ll be a household name. Take my word for it.

She burst on to the scene within the last couple of years mainly as a result of one song that was penned just before the Harvey Weinstein scandal broke, followed by the rise of the #MeToo movement. More of that later.

I jotted down a whole list of people she reminds me of as she switches effortlessly between serious songs, break-up songs (there were two, as she was at pains to point out), humorous songs about working in rough spit ‘n sawdust Australian bars, dodging the weird uncle you never knew you had when he turns up at Christmas Dinner with your folks, and a cover of The Beatles’ ‘Across the Universe’.

One of them, and I’ve made this comparison before, with Aurora, is Judy Garland. Donnelly has that level of all-round talent; you just know she could probably make it as an actress as well if she chose to. Or a stand-up comedian, as she peppers her pre-song stories with genuinely funny jokes and wry observations. Introducing the song ‘Allergies’ for example she remarks that she loves playing in Manchester and that she’s decided to do something special for tonight’s show. She’s going to play the next song in tune. It’s all in the timing and I can think of several famous Manc comedians who would have appreciated how well she delivered that line.

And that humour is incorporated in her lyrics. In ‘You Owe me’ she sings of her boyfriend “jerking off to CCTV” and in the second break-up song, which I think was called ‘Face It’, a light ballad is suddenly rendered asunder with the devastatingly funny but equally sad line, “I’ll be here in the end, playing with myself again”.

Her personality puts me in mind of Kylie, too, though I’m not sure if she would appreciate it herself. Another analogy must be with Jade Bird, for the way she attacks her guitar on some songs. And then, on the closing number ‘Mean to me’ she delivered the song perfectly in the style of one of my favourite artists, the hugely under-rated Finnish-American Holly Palmer. I kid you not, I was in heaven.

Her big number, ‘Boys will be boys” came unexpectedly halfway through the show. I thought she would finish with it. Some members of the audience recognised it from her introductory spiel but most didn’t which was surprising because Donnelly is an overt feminist and, to be blunt, many of the female section of the audience looked as if they share her beliefs on that matter.

‘Boys will be boys’ has been billed as an anthem for the #MeToo movement but let’s have it right. Weinstein and the rest are not so much charged with rape (though they may be) as with bullying and sexual intimidation through the vehicle of the casting couch.

This song is about rape, pure and simple, and who is accountable for it. The question I’d ask is whether a song like this can successfully be delivered, meaningfully, in a major key?

The other thing with songs of this nature is that she is going to be compared directly with other artists, perhaps to be put in the spotlight a little too early. There are few so far who have tackled this subject. One of them is Sweden’s aptly-named Dolores Haze in their tongue-in-cheek ‘Banana.’

Stella won’t be compared with them though, rather with artists of real class. The song’s third line (it relates directly to a friend who was raped) is a powerful one, which caught my attention immediately when I first heard it. “You invaded her magnificence”.

I recalled another of my favourite artists, Fiona Apple. In her song ‘Sullen Girl’, one of the most poignant ever written, Apple sings an even more powerful line: “But he washed me shore, and he took my pearl and left an empty shell of me.”  But then Apple was singing about her own brutal multiple rape right outside her Harlem apartment door on the way home from school, at the age of 12.

Taking all of the above into account I waited with some trepidation for how she would deliver the song and that “magnificence” line in particular. It demands gravitas. To be fair to the girl, it was a convincing performance.

Donnelly has also been quoted as saying “I don’t only live a life of anger” (referring to ‘Boys will be Boys’ and various other songs). In a live performance that does engender some peculiarities. For example her third song was a new one, ‘Beware of the Dogs’, which concerns racism in government and the media in Australia; a country which, she says, “is not what it appears to be”. It is, strangely for the subject matter, another major key piece and was immediately followed by ‘Season’s Greetings’ the easy-going Christmas Dinner ditty I mentioned earlier. The two were quite incongruous.

And that raises wider questions about Donnelly. I said at the beginning that she will be a household name within a few years, and not just in Fremantle or her birth country of Wales. But for what? As the new Kylie, or the new Fiona? As a contemporary artist just starting out she can get away with being both for the moment but before long decisions will need to be made if she is going to fulfil her terrific potential.

The support artist, Anna B Savage, was a revelation and should be headlining shows herself. She’s had to take a couple of years off to deal with a health problem but you would never have known. She has a fantastic, and rare, contralto singing voice which put me in mind of one of Donnelly’s Australian contemporaries, Gordi, and she’d brought along a couple of full length mirrors which became part of her act as she cleverly inserted a recording of a soliloquy on her own state of mind while looking into them as she tuned her guitar between songs, eliciting generous applause from the audience for her ingenuity.

While an Ariana Grande cover (‘Into You’) didn’t really come off her own songs are sharp, observant, and introspective and her lyrics also are replete with self-effacing humour, “I’m too insecure for this/for him to undress me and then take the piss”.

Between them these two artists provided one of the best nights I can remember in the bohemian (for want of a better word) surroundings of the Soup Kitchen.