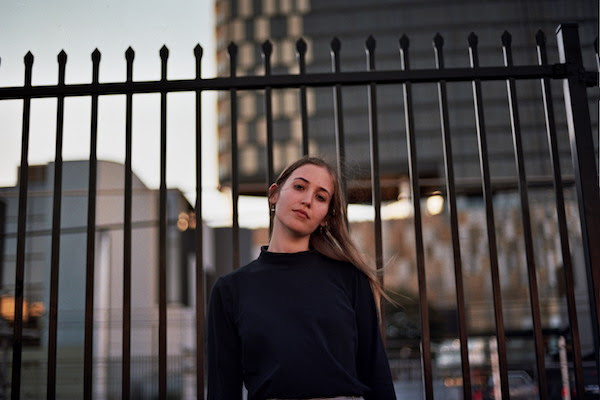 For the final Tracks of the Year piece, GIITTV Editor Bill Cummings selects his favourite 10 tracks of 2018.

Hatchie aka Australian songwriter Harriet Pilbeam stole our heart this year. Her second single ‘Sure’ a gorgeous pop earworm carved out of gleaming glass was what hooked us in, her gorgeously wistful melody cascading across a backdrop of shimmering riffs and shivering synths that sound like rainfall from Heaven, is a diamond cut of pop. “So you wanna do it over? But is it really ever over?” sings Pilbeam on an impossibly catchy see-sawing chorus melody that has echoes of the Sundays or M83, her effortless tone and vocal performance capturing the bittersweet essence of what it’s like to fall in and out of love.

2. Audiobooks – Dance Your Life Away

‘Dance Your Life Away’ is a surreal tale by the unconventional odd pop pair. Capturing the contents of a shaken cocktail glass, this frenzied melange of percussion sewn with dancing synths, welds the post-funk playfulness of Talking Heads with breathless vocal explosions redolent of Bjork‘s most frenetic moments. Audiobooks had created another constantly shapeshifting, refreshing pop cracker.

3. Christine and the Queens – It Doesn’t Matter

The fantastic bass bounds and twitching shudders of the infectious and quite brilliant ’Doesn’t Matter (voleur de soleil)’ Tissier effortlessly switching back and forth from quickly flicked couplets to the empowered cascading notes with choruses like full lungs invested of an indestructibility that throws off the shackles. Literally wrestling with God, faith, and existence (‘Run if you stole a shard of sunlight’) in one evening where she sings one exhilarating crisis anthem to the heavens.

Australian band City Calm Down made quite a first impression on me with the brooding ‘Joan, I’m Disappearing’ it’s not hard to see why exquisite instrumentation threaded with live sounding piano motifs and elegant percussion, drum fills and forgiving synth parts that are reminiscent of Talk Talk at their most commercial, the vocal is quite outstanding trembling with an existential lyrics (“I’ll sit here for days/In my airconditioned cage”) and an emotive swoop.

2018 saw Natalie Prass return with a delightful brand glitterball funk, this spinning beauty was the precursor to her excellent album The Future and the Past. Prass delicately pierces and lassos this warm jazz-flecked dancefloor groove, her sensitive high register vocal investing ‘Short Court Style’ with not just an infectious quality but a call for love and hope, in an era of darkness and confusion.

Young Fathers had another good year, their album further clarifying their genre-bending sound. ‘Toy‘ was one of the picks of the bunch. The Salomon Ligthelm directed video sees our world leaders reimagined as spoilt young children. Like Bugsy Malone does the G8, this parody adds a counterpoint to the track’s frenetic keys, quick-fire rhyming, chanted refrains and subject matter that mockingly riffs on global political affairs spinning out of control in the hands of narcissistic leaders.

Briton via Icelandic girl gang Dream Wife skillfully captured the zeitgeist with the ace ‘Somebody’ an anthem for the pushback of the #MeToo movement. It sticks two fingers to a court ruling that sought to blame a victim for being raped. Spiky, energetic, smart, and delivered with a mischievous grin it has everything we love about Dream Wife, guitar hooks, kick-ass drums and bass and its chorus is an arms aloft affirmation of self-empowerment, all together now (‘I am not my body/ I am somebody!’)

Carmarthen trio Adwaith had a great year. Their debut album ‘Melyn’ and their live shows showcase their gorgeous, yearning, inspiring and effortlessly crafted songs, possessing both attitude and charm. Adwaith are a coming force in Cool Welsh pop and they’re lovely down to earth girls to boot!

Widescreen standout ‘Fel i Fod’ that’s chiming arpeggios and longing vocals casts eyes into the middle distance, distills that feeling of being lost and trying to find meaning, and it really moves me. Its echoing refrains coupled with magnificent atmospherics and chiming guitars that hove into view through grey clouds, it possesses a transformative power. It’s already one of the most streamed Welsh language songs of all time.

Sibille Attar‘s new single ‘I Don’t Have To’ is a grandly meditative musical hall style pop song that takes the listener on a journey, there’s a grandness to this wonderful instrumental shudders and Attar’s exquisite vocal swoop, that bristles with a longing, and punctuated defiant exclamations, she sings into the ether capturing the painful contradictions of love, it certainly fits in the tradition of the likes of the Dresden Dolls or more recently U.S. Girls, and it sounds absolutely glorious.

A brilliant talent from Australia via Wales, Stella Donnelly’s ‘Mechanical Bull’ is a gem. A pointed stripped back strum that’s deceptively wrapped in an evocative and languid song, a vividly drawn critique of the objectification of women in modern-day dating scenarios, sharply drawn couplets are laced with Donnelly’s remarkable voice at once sardonic and fierce: a barbed lullaby with a message that tumbles out in a metaphor, it’s the sound of someone rolling their eyes at a sexist wanker and saying firmly ‘NO’, ‘I need to be alone/You’ve been at my throat for too long’. Donnelly’s faint Aussie twang and stripped back sound might draw one’s mind to the early work of Courtney Barnett and sure she possesses the dark wit, but her excellent voice and couplets are underscored by an introspective, brutality that reveals itself as you pay closer attention to each word, that’s more in keeping with early Emmy the Great or Laura Marling wrapped in her experiences of everyday misogyny.