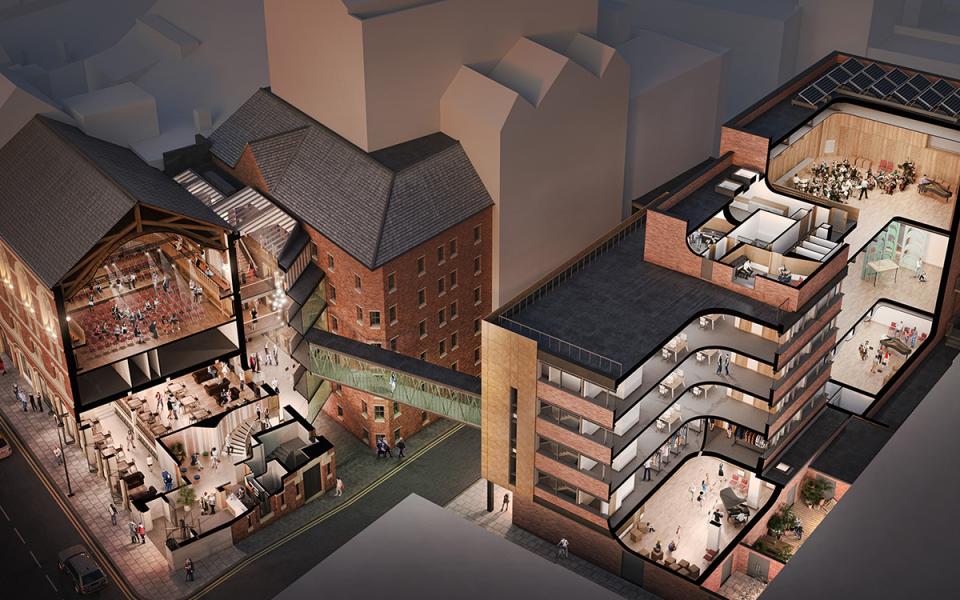 2019 promises to be a very special and most significant year in the history of the Howard Assembly Room. Following a £31 million refurbishment of Leeds Grand Theatre in January 2009 this stunning concert venue – replete with a barrel-vaulted roof, stained-glass windows, and gothic motif decorations in keeping with its original Victorian design – re-opened its doors to the public. Later this month it will celebrate its 10th anniversary.

Then in March of this year, following a performance by Jon Boden & The Remnant Strings, the 350-seat Howard Assembly Room will close for a year as part of Opera North’s extensive development project, one that will see the venue get a brand new front entrance, box office, restaurant and bar that will be joined together by a glass atrium space spanning all six floors of the building.

In addition to these major architectural changes, an expanded artistic programme will be introduced, increasing the number of performances, gigs and events that are already held at the Howard Assembly Room.

In anticipation of this spectacular redevelopment, the Howard Assembly Room has put together yet another wonderfully imaginative and diverse season of events that embraces elements of jazz, folk, world and classical music as well as film screenings and lectures.

God Is In The TV has selected just a few of the expected highlights from this final season before the Howard Assembly Room temporarily closes its doors until 2020.

The programme commences on the 11th of January with a performance by the celebrated British concert pianist, conductor, composer, festival curator and Head of Piano at the Royal Academy of Music, Joanna MacGregor before continuing just four days later with Music Book: A Twilight Concert by Seckou Keita in which the virtuoso Senegalese kora player makes a quick return to the Howard Assembly Room having only been here last November with Welsh harpist Catrin Finch in what had to be the venue’s “best concert of the entire year”.

On this occasion, a set of transcriptions of Seckou Keita’s music will be performed by a chamber ensemble in a world premiere of this groundbreaking new project.

Barely having had chance to catch our breath, three nights later on the 18th of January sound and vision once more combine to spellbinding effect when the Icelandic string group amiina (regular collaborators with their fellow countrymen Sigur Rós) will perform their live soundtrack to a screening of Juve Contre Fantômas, one of the 1913 Fantômas silent film series.

On the 24th of January, in association with local music promoter Hee Haw Sessions, the Howard Assembly Room presents the former Old Crow Medicine Show singer, guitar and banjo player Willie Watson in what promises to be a timeless and evocative relocation of traditional blues, country and gospel music into the modern age.

On the penultimate night in January, the Howard Assembly Room and Hee Haw Sessions once more join forces, this time to bring The Delines to Leeds. Featuring three former Richmond Fontaine members in Willy Vlautin, Sean Oldham and Freddie Trujillo, alongside Amy Boone and Cory Gray the band will be showcasing material from second album The Imperial. Support on the night comes courtesy of the outstanding Scottish folk musician Alasdair Roberts

Come the 13th of February and it will be the turn of the legendary American jazz guitarist and composer John Scofield to grace the Howard Assembly Room stage. A man who has played with acts as diverse as Miles Davis, Pat Metheny and The Grateful Dead’s Phil Lesh over the years will this time present an evening of solo guitar on what is his only UK date on this tour.

Main image: an architect’s visualisation of The Opera North estate