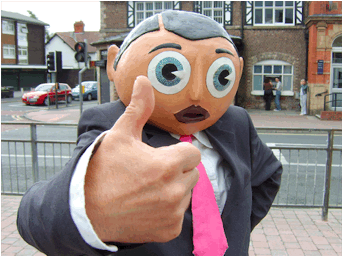 “Be careful what you wish for – it may come true.” appears to be the message of ‘Being Frank’, a fascinating new documentary about the life of Chris Sievey, better known as oddball icon Frank Sidebottom.

Like many thousands of others, Sievey nursed a burning desire to make a career out of music. Unlike anyone else, however, he eventually found it by donning an outsize paper mache head and singing songs glorifying the previously obscure Mancunian suburb of Timperley.

But being Frank is only half the story of ‘Being Frank’ the film, which covers Sievey’s life from staging a sit in at The Beatles’ Apple offices as a teenager to scamming the music industry with stolen Stiff Records stationery and very nearly smashing the charts with his first band The Freshies, only to fall foul of advertising rules with a song that references a certain famous record store.

The story of the band attempting to re-record the words and wiping the guitars in the process seems typical of the bad luck that followed Sievey around, but the hapless yet eternally optimistic Sidebottom character he created was immediately taken to the public’s heart. Footage of Sidebottom playing Reading in 1991 – this reviewer can confirm it was a storming show – and introducing Bros at Wembley Stadium, as well as the genuinely unbridled hysteria of his fans at certain shows, showed that fortune was not always against him by any means. Sievey was undoubtedly a man way ahead of his time, too, inventing the first computer game video, a 7” single with a music track on one side and computer code pressed into the other. His extremely early adoption of DIY-shot video, too, raises the question of exactly how big he would have been if YouTube had been around in his heyday.

The ultimate irony is that the more popular Sidebottom got, the more Sievey felt trapped by the alter ego, and in fact he had a five year plan to reveal the personality behind it and re-launch himself as a serious singer-writer, a plan that he died a mere year from fulfilment in 2010. His battles with depression, alcohol, cocaine and marital fidelity are also documented here but don’t overshadow the entire tale, and indeed pretty much everyone here, including his estranged wife and former band members, along with famous fans like Jon Ronson, Johnny Vegas, Ross Noble, Mark Radcliffe and John Cooper Clarke, can’t seem to muster a bad word on him.

When he died and faced a pauper’s burial as a result of ongoing financial recklessness, fans raised £21,000 to give him a decent send off, and eventually he was honoured with a statue in – where else? – downtown Timperley.

Sievey was obviously a more complex character than his creation, but ‘Being Frank’ does a great job of exploring those complications without detracting from the pure joy he brought his thousands of fans and, some if not all of the time anyway, his creator. Is it worth a watch? As Frank himself might insist: “Oh yes it. It really is.”