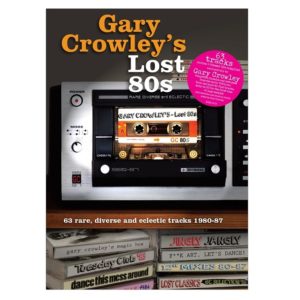 If you are a music fan of a certain age, you probably have a handful of 80s compilations, perhaps with a Rubik’s Cube on the cover and featuring the usual suspects (‘Tainted Love’, ‘ Relax’, possibly ‘Take On Me’). And while there is absolutely nothing wrong with that, (those three examples are superb singles for a start), the world probably doesn’t need another collection of those same tunes. What the world does need though is Gary Crowley’s Lost 80s, which was very definitely a labour of love for the Radio London DJ and all-round music-loving good guy.

The main premise of this 63 song, 4CD collection, (a reduced number of songs also available on a smart vinyl version), is to round up classic songs that don’t appear on your everyday comps. Split into four broad themes across the four discs, we begin with the self-explanatory Jingly Jangly, which concentrates on the indie guitar (for  want of a better expression) side of things, with a healthy dose of premium Scottish indie, such as the excellent ‘Pillar To Post’ by Aztec Camera (main man Roddy Frame a mere 18 years old on its release), the wonderfully melancholic ‘Trees and Flowers’ by future Top 40 stars Strawberry Switchblade and the hard to find classic ‘Honey At The Core’ by Friends Again. Paul Quinn always seemed to be on the verge of being a big star, and his ‘Ain’t That Always The Way’ is a welcome inclusion; a note for the compiler would be a plea for Quinn’s band Bourgie Bourgie to appear on Volume 2! Hurrah‘s ‘Sweet Sanity’ always sounded like a smash hit (it stalled at an unfeasible No. 83) while Kitchenware label mates Prefab Sprout appear with their peerless debut single ‘Lions In My Own Garden: Exit Someone’, truly one of the greatest records ever made – and a decent copy of the original 7″ would set you back roughy five times the cost of this 4 CD set! Other notable mentions on Disc 1 go to Haircut 100 with the fine ‘Milk Farm’ and the rather lesser known Fantastic Something‘s ‘If She Doesn’t Smile (It’ll Rain)’, which is the actual embodiment of “jingly jangly” and a very sunny song despite its title. The final song on the disc is the beautifully-realised cover of The Smiths ‘Please, Please, Please, Let Me Get What I Want’ by The Dream Academy – the song was actually tipped by some for Christmas Number 1 in 1985, but fell a few dozen places short. It never appeared on a Dream Academy album and is therefore a perfect choice.

Disc 2 is subtitled Fuck Art, Let’s Dance and pulls off the same tasteful mix of actual massively successful chart stars and those with more of a cult following: from the former category we have Spandau Ballet (their contribution is ‘Confused’, a rarely aired track from their highly underrated debut Journeys To Glory), Altered Images (‘Love To Stay‘), Associates with the superb ’18 Carat Love Affair’ and, somewhat incongruously, Depeche Mode with ‘Shake The Disease’, maybe the oddest choice on the whole compilation as it was a huge mid-career hit (well, relatively) – but we’ll let it pass as it is actually their best single and it’s always good to hear it! From the slightly less well-known camp, it’s great to hear Carmel‘s jazz-tastic ‘More More More’ (also a Top 40 hit) and the brilliantly original ‘Do You Believe In The Westworld?’ by Theatre Of Hate, which could only improve any compilation and indeed, day. There are a lot more interesting tracks too: Bush Tetras‘ restless ‘Too Many Creeps’ is at the very crossroads of punk and dance, while another sizeable cult concern in the 80s were Fashion who appear with ‘Streetplater (Mechanik)’. Honourable mentions too for the inclusion of Matt Fretton‘s ‘It’s So High’, another that stalled outside the Top 40 when it looked like he could be a big star, and Jo-Boxers‘ ‘Is This Really The First Time You’ve Been In Love’, which is unusual here in being a post-chart success single (the record was actually their last in 1985).

Disc 3 is Dance This Mess Around and again mixes familiar artists with the less familiar – Crowley’s picking Of Wham! and Culture Club (‘A Ray Of Sunshine’ and ‘I’m Afraid Of Me (Extended Dance Mix)’ respectively) is nothing to do with the dreaded ‘guilty pleasures’ or any kind of irony, but rather more that he loves these songs. It’s a pleasing attitude and the set benefits a lot from it. We also have Grandmaster Flash‘s ‘The Adventures Of Grandmaster Flash On The Wheels Of Steel’, a truly revolutionary and exciting record, mixing  and scratching samples before pretty much anyone else did. We have half of Talking Heads (i.e. Tom Tom Club) with their extraordinary ‘Genius Of Love’ as well as a Talking Heads cover in the shape of The Staple Singers‘ ‘Slippery People’. Monyaka‘s ‘Go Deh Yaka’ was actually a real, live Number 14 hit in 1983, and it’s wonderful to hear it again, a kind of reggae / electro cross which presumably qualifies for this project due to being somewhat neglected over the years. We even get Matt Bianco to end part 3 with ‘Matt’s Mood’, a five-minute proto house instrumental (really!) that also probably hasn’t found its way onto many of those previously mentioned Rubik’s Cube compilations either.

The fourth and final piece of the jigsaw is called 12 Inch Heaven, which pretty accurately sets the scene for what is held within. Been looking for the U.S. Remix of the first Bananarama single ‘Aie A Mwana’? You’re in luck! There’s a real mixed bag on Disc 4 (stylistically, that is, the quality holds up remarkably throughout), with the much-loved Pete Shelley‘s much-loved ‘Homosapien’ (the dance version) rubbing shoulders with Was (Not Was) (the 12″ version of (Return To The Valley Of) Out Come The Freaks) and the 12″ of Chic‘s ‘Hangin”.  If you were a DJ in the West Midlands in the  mid-80s (and perhaps everywhere), you had to have two records: one was Tin Tin‘s ‘Kiss Me’ (not featured here) and the other was the mysterious Animal Magnet‘s ‘Welcome To The Monkey House’, an absolutely guaranteed high energy floor filler despite never troubling the Top 100, which makes perhaps its first ever appearance on a compilation album.

This review barely scratches the surface of the wonders within this collection. I haven’t even mentioned Fun Boy 3. Or Bow Wow Wow. Or The Pale Fountains. Gary Crowley’s Lost 80s is an absolute joy. Roll on Volume 2!