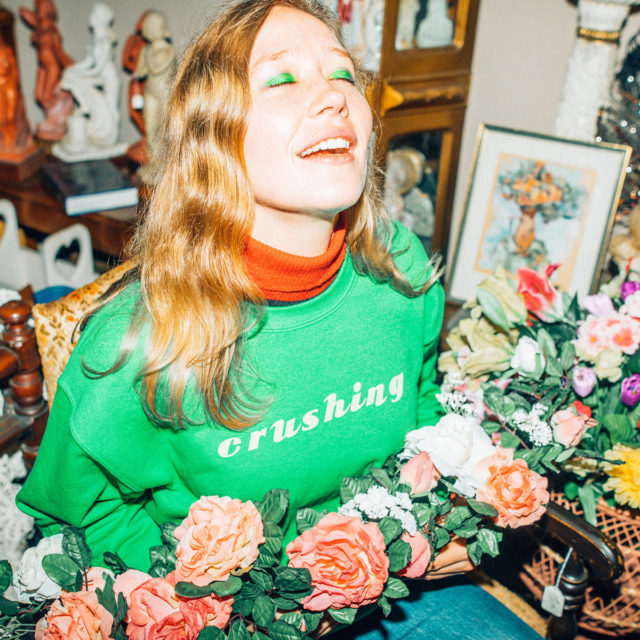 What some fail to do is articulate every facet of that process eloquently. The event, the slow disembowelling, the periods of anguish and despair that cut your insides to ribbons until it can’t hurt anymore. The gradual ascent, meeting people, taking risks, the new beginnings.

Julia has been humiliated for the final time, seen herself become a person she doesn’t want to be, broken the chain of behaviour, allowed herself to be exposed, even dared that person to do it.

“Crushing” in every possible connotation of the word.

On this her second L.P, Julia has discovered that above all, her voice carries every note that is played on this record. Sometimes this is so minimal, such as on ‘Body’, it has the subtle textures of instrumentation, a slight change in the pattern of the bass, but it’s her fragile, pained voice that is telling of a strenuous and painful break up. On the penultimate song, ‘Turn me Down’, her voice cracks. It’s a perfect imperfection, akin to that moment in The Rolling Stones‘ ‘Gimme Shelter‘ when Merry Clayton attempts the high note and strains the chords to the limit and it cracks like a window pane with the emotion.

Sometimes the debut is the pièce de résistance of a career, the opening gambit that has been honed to perfection with no preconceived ideas or notions of a veteran in a recording career. However, in other cases the muscle is developed, confidence is built, the songwriter is promoted from novice to maestro.

Jacklin is on that path.

There’s a soothing lullaby character to her, consoling herself as much as any other protagonist of her song, not least on ‘Comfort‘. There is a beautiful simplicity to the playing and production that means this could have come from the early blues and soul recordings in the twenties and thirties.

It’s painfully autobiographical, raw and unapologetic in its personal, open hearted honesty. ‘Body’ is obvious as the curtain raiser but ‘I Don’t Know How to Keep Loving You’ perhaps more so as it is explicitly direct about her innermost thoughts that would be so difficult to say to someone. Further into the record, ‘Turn Me Down’ is brutal in the middle breakdown as she pleads “please just turn me down/why won’t you turn me down”.

If nothing else, this record shows you that for all the studio and production tricks, the Pro Tools, the Auto-tune, all you actually need is to mic up a beautiful voice and a guitar well and let it do the talking. Every squeak, shuffle, breath, imperfection is on display. And it’s everything you need.

There are occasional breaks from the intensity. ‘Pressure to Party’ is the oldest track as far as the public are concerned, and it is the closest stylistically to her debut Don’t Let the Kids Win although the subject matter deals with the old adage “plenty more fish in the sea” and going out to find the next love of your life. ‘Good Guy’ describes being with that person who isn’t, but is what you need at the time, asking them to tell you what you want to hear.

A cliché it may be, but all the best art is born from heartbreak if you can articulate it better than anyone else. Julia does, you feel every sinew of regret and loss because you’re there in the room.

You will be crushed and have a huge crush on Crushing.

Crushing is released on 22nd February through Liberation Records.