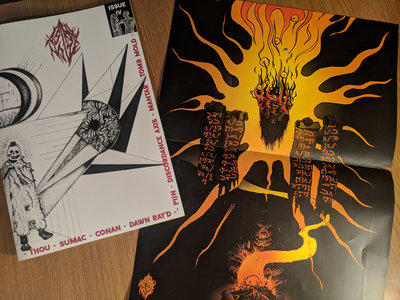 Despite the rise of digital media, the fanzine has refused to die. Next time you go to a gig, check out the merch table, or where they keep their copies of DIY and Crack, and you’ll probably see a zine or two. Whenever I see a zine I pick one up. Sometimes they’re just the rantings of a super fan or someone looking to form a clique, but generally they’re full of insightful thoughts, interesting takes on classic albums or full of wonky drawings.

One zine that I’ve devoured since it started is Astral Noize. Each issue the Astral Noize team tries to keep us up to date with the doom metal scene. The first thing you notice about Astral Noize, after the quality of the writing is unlike most zines, Astral Noize features glossy pages and colour pictures. This is not what you’d expect from a metal zine. But Astral Noize isn’t just a zine, it’s also a record label. So far they’ve released nine cassettes from the likes of Wren, Olivia Neutered John and most recently Five the Hierophant. Each one is totally different from the one before, and after, but there is a thread that connects them. This is the same for the zine. Each article has a different approach and point, but they are entertaining and informative, without being preachy or getting bogged down in the details.

Metal and zines have always been mates, see question four, but what makes Astral Noize a fascinating read is how knowledgeable the writers are. They know the scene inside and out so their picks aren’t made because a PR has slipped a £20 inside an MP3 for it to be covered. The team are picking well known bands as well as brand new and lesser known ones. This combination is intoxicating. Astral Noize are passionate about the music and more importantly they want you to be passionate about it too.

We chatted to David, Rich and George to find out how they approach each issue and where their initial love of zines came from.

What came first, the label or the zine?

David: The zine came first; the whole reason for starting Astral Noize was to create a physical mag, although I always wanted to create a label too, it just came about much earlier than we expected when we had the opportunity to put out our first release, Failure by Aerosol Jesus, and it’s just snowballed from there really.

Rich: What Dave said, the first zine took like a year to do, and after its release, I started up the site, which really got things rolling.

George: The zine came first, but the idea of a label floated around for a while, it’s just cool that it came about quicker than we initially expected cause Dave has given us the opportunity to work with some sick bands.

Why did you decide to start writing and releasing zines?

G: Rich could probably answer this better since he started it and I mostly handle the online side of things, but for me I like the DIY aspect of it, and the freedom it gives you to cover whatever you think is cool and interesting, rather than focusing on bigger bands because they’ll draw more readers.

R: I think the idea of doing a zine had been a topic of some conversation beforehand. I have a degree in music journalism, and had just quit at a site I’d been a part of in mid-2016, so when the suggestion of doing a zine about extreme metal came up in our circle it seemed like the best way to put all the skills I’d learned into something I loved.

Are there any zines that inspired you start doing it yourself?

D: In all honesty my knowledge of zine culture was pretty limited before we started AN. I had only really read the big publications, and I just knew we wanted to do something that was different to that.

G: I’m not a huge reader of zines either, to be honest. Rich and I both studied Music Journalism at uni, and after that I wanted the opportunity to wholeheartedly champion the music that I love. Zines let you do that in whatever way you think is best, without worrying about profits or how accessible and marketable it is. Instead of trying to pitch to bigger publications, which feels a bit like begging to be allowed to talk about something you think should be talked about, we made our own publication, and cut out the hassle.

R: I was always fascinated by reading up about the DIY metal scenes of the ‘80s, and for my dissertation at uni I got Metalion – which is basically a fat compilation of every single issue of the iconic Slayer mag (Slayer mag set the ball rolling with extreme metal zine culture) got me thinking that I could do this to.

The other influence that we’ve taken from ‘zine culture is the idea that a ‘zine – as opposed to a magazine – is far more finely curated and visually, and editorially you can take a lot more creative liberties. Astral Noize combines the professional standards and processes that we’ve established, combined with that “no rules” creative ethos that makes ‘zine culture so great.

Why do you think that metal and fanzines go hand in hand?

D: Metal fans can be pretty obsessive, also a lot of fans are in bands themselves, probably the highest % of any genre, which I think makes them more involved with the music they listen to.
G: Underground metal is never gonna be a huge money spinner – bands, labels, writers etc all kind of go into it knowing that and doing it purely because they enjoy it and want to participate in the scene. Zines give you a chance to do that.

R: Metal has always been fairly specialist, especially these days, so a lot of mags are either going under or just doing away with the whole extreme metal thing altogether because it’s such a connoisseur market. Specialist genres, under which a lot of the metal scene falls under, always stay alive in the underground, so I guess that’s where fanzines come in.

Why are zines important to you?

G: Zines can shine a light on overshadowed voices and allow a freedom that more mainstream magazines don’t have. Alongside the internet, zines can help introduce young artists that deserve attention but don’t have the reputation or financial means to get their name out there. Despite the strength of the scene and the wealth of interesting new releases dropping week-in week-out, Metal Hammer recently dropped the Subterranea section of the magazine dedicated to underground metal – this stuff doesn’t bring in money. The people behind MH may even still want to cover that stuff, but we live in a profit-driven society and they’ve struggled themselves recently.

Mainstream magazines have to think about marketability and deadlines, which can stifle the creativity of it all. Zines, meanwhile, have more freedom, and as such are a fantastic creative outlet.

Why did you decide to go with a glossy and colour zine, rather than a traditional black and white?

D: We always wanted to have a DIY ethos and eschew some of the norms of music magazines. It’s why we have art rather than artists on the cover and as few adverts as we possible. I work in print so fortunately we could make the zine colour & glossy etc without it being unaffordable for us. I really like the aesthetics of old school cut and stick zines, but it wasn’t something we wanted to do with Astral Noize.

Astral Noize is bigger than other zines. Was this important to you?

D: It’s got bigger each issue too. It’s not necessarily important though. More and more people join our team in-between issues, all with interesting ideas so it’s just been a natural progression.
G: When we enter the initial stages of putting a zine together, the ideas just seem to keep coming. First and foremost, we want to ensure that the consistency of the pieces is maintained so we can put out a high-quality zine, and as our writing team has grown, the number of great pieces we have coming in has gone up as well.

Do you enjoy writing the interviews or features more? Why?

G: Features can be more interesting and in-depth, and are often a more creative process that allows you to write in a way that’s more individual to you. But, they’re also time consuming and can be frustrating to get right. Interviews, particularly simple Q&As, can be fun to do and allow you to print full quotes and let the artist speak for themselves. So they both have their benefits.

Gig Stories is a great feature. Why was this important to include?

D: Some of what we do is quite serious and politically natured too. So it’s important to include some light hearted features.

The House Show Diary feature is a piece of photo journalism. Why was it important to break up the text with image based stories?

G: The images help break up the text, sure, but they’re also capable of capturing the spirit or mood of an event better than words.

Since writing the zine has you noticed changes to the scene and metal culture?
G: Strides have been made to make the metal scene more inclusive, but there’s a long way to go – plenty still want to push it the other way.

Why do you think that the zine having a resurgence in a digital world?

D: It makes sense really, so much of our life is taken up by things in the digital realm that it’s nice to withdraw into an analogue, physical world.

G: I think what Dave mentioned is very true, in that way it’s similar to the vinyl resurgence. But it’s also the same reason why we have more music than ever now – the internet makes it so easy to do everything yourself at home on a tight budget.

How would you sum up the zines you’ve released in 10 words or less?

Every new issue is a huge step forward!

What is on the horizon for Astral Noize?

G: Stuff moves quite fast for me on the site, so it can sometimes feel a bit like hastily laying the track down in front of a moving train. But there’s always a lot of interesting ideas floating around, and some exciting stuff in the pipeline. We’re working all the time to improve everything we do, so expect even bigger and better things.
D: In terms of the label we have 3 releases coming up in the next few months. After that possibly a break to regroup and help out with other aspects of Astral Noize. But you never know, something may come along that I just can’t say no to.

R: We’ve got some big plans for issue 5. It’ll be coming out at the end of 2019 – so the end of a decade and the 50th anniversary of the birth of heavy metal – and it’s (obviously) our fifth edition, so we’ll be going all out for that one. We’ve also got our live events wing starting up 2nd March (free Ithaca show in Brighton come hang), so 2019 is going to be a defining year for us.

The fanzines can be bought here
https://astralnoize.bandcamp.com/
If you have a zine or know of a zone we should cover, please get in touch
godisinthetvzine@gmail.com