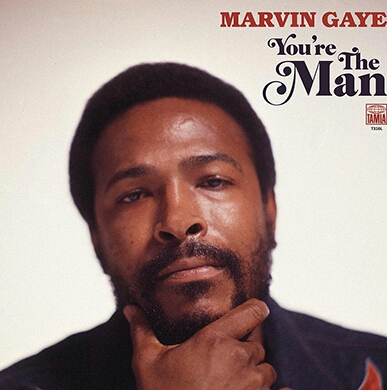 Whilst not wishing to make light of his demons – and he definitely had those – Marvin Gaye was always a gentle, sensitive soul, and reacted to the relative ‘flop’ chart placing of the title track, ‘You’re The Man‘ in 1972 by cancelling its planned release, hence it finally being issued only now, on what would have been Marvin’s 80th birthday, 29th March 2019.

It seemed like an impossible task to follow up what is arguably the greatest soul record of all time, the uber-aware social observations of What’s Going On, but the real tragedy is that it seems the guy actually pulled it off, and hardly anybody heard it until now. Gaye’s political views too, were at odds with the founding father of Motown, Berry Gordy Jr, which has been mooted as another reason for its implosion at the time, but in truth, although it continues the theme of environmental concern to some extent, You’re The Man has an altogether more ‘party’ atmosphere about it. And it’s the best damn party in town.

‘The World Is Rated X‘ may already be familiar to many, as a version of it was released posthumously in 1986, in the wake of Gaye being cold-bloodedly gunned down by his own father two years previously. It’s simply an irresistibly smooth soul classic in line with Stevie Wonder‘s Talking Book. Indeed, the album may well have been regarded in the same hallowed tones as the aforementioned seminal long player, had it ever seen the light of day at the time.

Following this is the utterly spellbinding ‘Piece Of Clay‘, Gaye’s voice desperately imploring “father, stop criticising your son“, which is simply devastating when you consider what was to come, but it’s another track that would most likely have scaled the upper heights of the Billboard Hot 100, had it attained single status.

It’s actually quite baffling as to why ‘You’re The Man‘ itself was chosen as the lead single, as it’s far less commercial than most of the compositions on offer here, kind of bridging the gap between What’s Going On and the more sleazy funk of his instrumental soundtrack to Trouble Man. ‘Where Are We Going‘ for example holds a similar appeal to what the O’Jays were doing at the time, as does the terrific ‘Try It, You’ll Like It‘, which is musically not too far removed from The Jackson 5‘s ‘I Want You Back‘.

Perhaps You’re The Man‘s crowning glory though, is the sleepy jazz bar ballad ‘I’d Give My Life For You‘, which harks back way before Motown was even a glint in Gordy Jr’s eye, tipping its trilby to Frank Sinatra‘s ‘In The Wee Small Hours‘ as much as it does to any of his closest contemporaries.

Now I just need to decide whether I’m allowed to include it in my ‘Top Ten Best Albums Of 2019’ when it gets to that time of year, because believe me, it sure as hell deserves to be heard. It’s wonderful.

You’re The Man is out now on Motown/UMe.