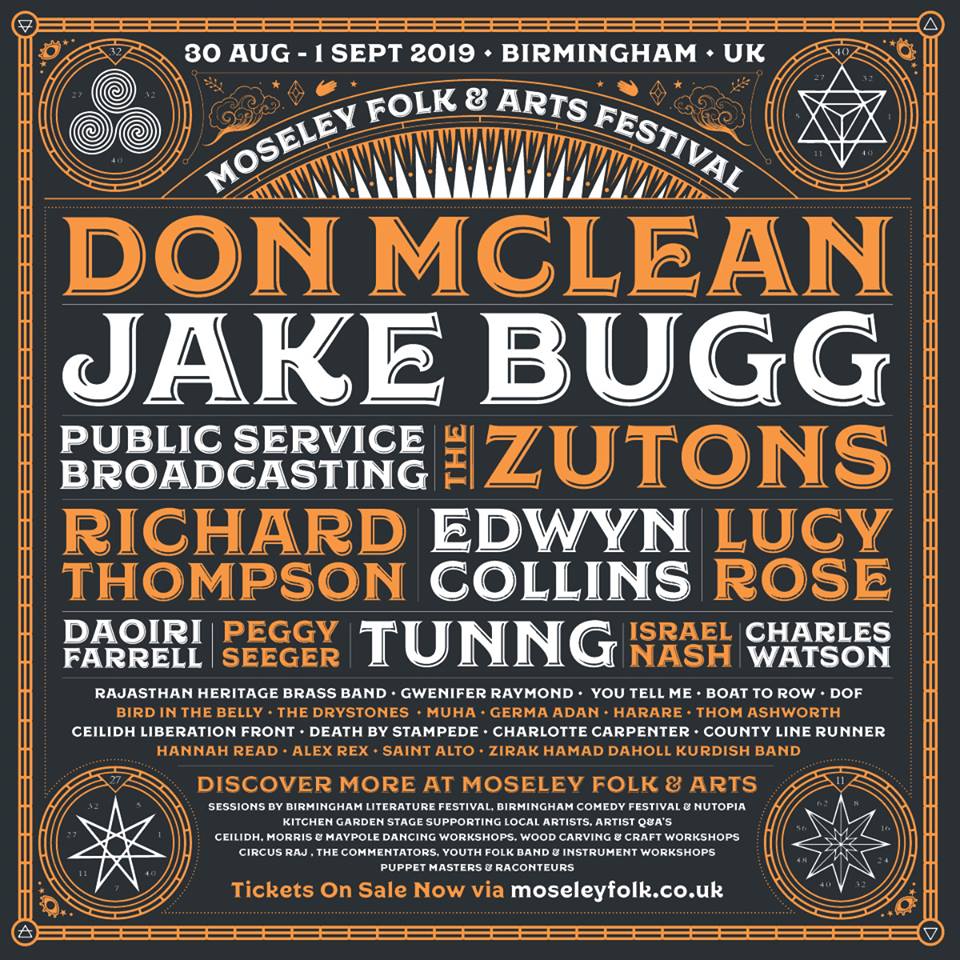 It may well be some five months away yet, but we at God Is In The TV are already getting very excited about the prospect of this year’s Moseley Folk & Arts Festival. Our sense of anticipation was heightened even more by last week’s announcement of the full line-up. Don McLean – he of ‘American Pie’ and ‘Vincent’ fame – had already been revealed as Sunday night’s headliner, but now to the legendary American singer-songwriter we can add the names of the young Nottingham tunesmith Jake Bugg, Public Service Broadcasting – whose spectacular live show will light up Friday night – and the joyfully reformed Liverpudlian indie-rockers The Zutons to those acts who will be heading the bill in 2019.

Returning for its 14th annual outing to the delightful parkland surroundings of Moseley Park and Pool, a mere two miles from Birmingham city centre, Moseley Folk & Arts Festival has once more put together an absolutely cracking musical line-up that showcases some of the very best Folk, World and Roots music that is around today. Supporting this year’s headliners is an incredibly strong undercard which features, amongst many others, English folk icon Richard Thompson, the veteran American folk singer, songwriter, feminist and activist Peggy Seeger, that magnificent Scots survivor and former Orange Juice frontman Edwyn Collins, and Lucy Rose, who only this week has seen her fourth album, No Words Left top the official Record Store Chart.

And this is before we even get round to talking about the Irish traditional singer and bouzouki player Daoirí Farrell, experimental folk band Tunng, the American desert folklore of Israel Nash, Welsh multi-instrumentalist Gwenifer Raymond, and the former Slow Club man Charles Watson who will bring even more diversity and wider national and international appeal to this year’s event.

The expansion of the festival’s name to Moseley Folk & Arts reflects the other non-musical entertainment that will be featured at this year’s event, including what promises to be an incredibly rich programme of Arts & Crafts, Comedy & Cabaret, Poetry & Literature as well as Talks & Debate.

To get us even more in the mood for Moseley Folk & Arts Festival 2019 take a look at this video showing some of the highlights from last year.

And tickets for the event can be bought HERE