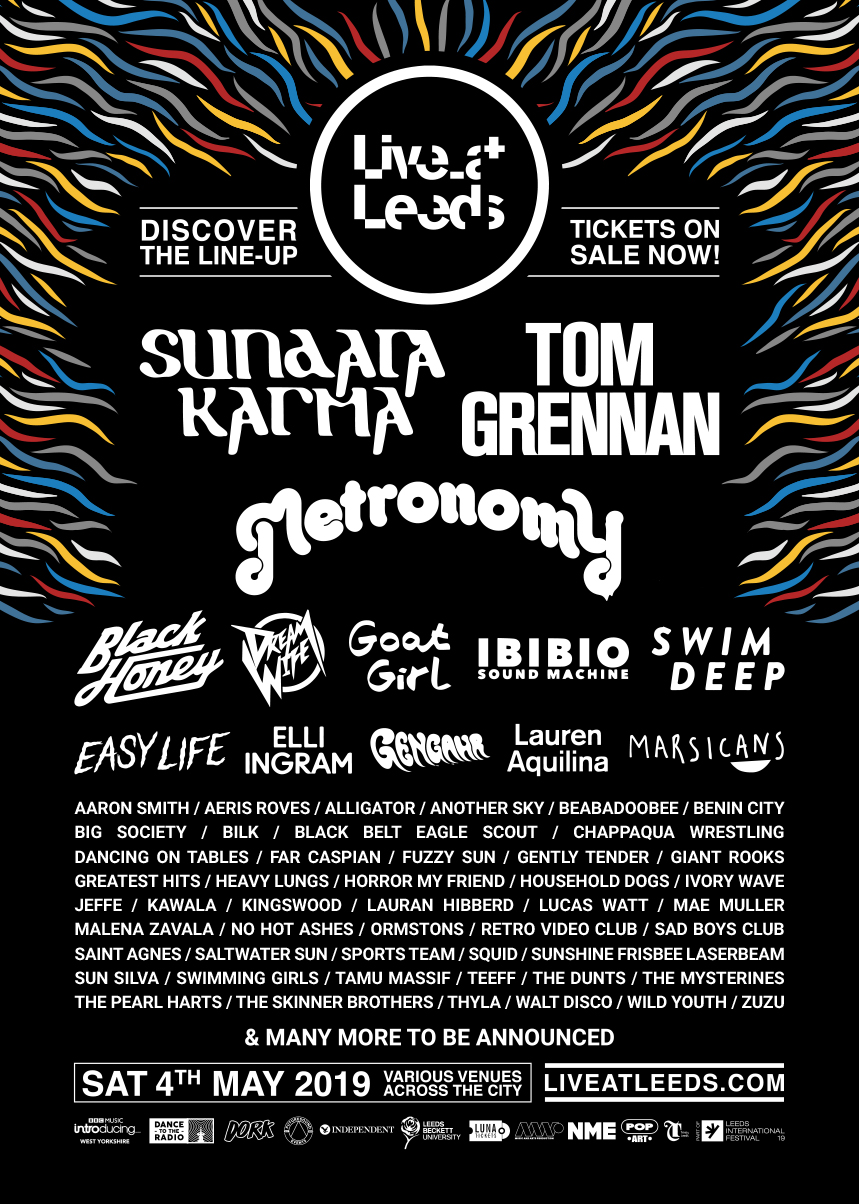 Fresh from being crowned THE BEST FESTIVAL FOR EMERGING TALENT at the UK Festival Awards in 2018, Live At Leeds returns with yet another stellar line-up for their 2019 offering.

This is undoubtedly one of the best festivals to kick off your season with, seeing that most of the acts playing at this year’s shows are set to be the artists that we’ll all be talking about for the next 12 months, so it’s very exciting.

The multi-venue festival, which spreads itself from Leeds centre to the city’s nearby outskirts, has its finger firmly on the pulse of what music fans are currently listening to. With indie outfit Sundara Karma taking one of the pole positions at the top of the festival’s bill.

The band deserve to be here and after several years of constant touring and perfecting their sound, they’re finally getting their time in the limelight. Sundara Karma’s lead singer Oscar Lulu’s ability to infuse some Bowie and Brett Anderson-esque rhythms into his vocal, is bound to be an amazing experience live. The band has just released their second album Ulfilas’ Alphabet, so this will be one show not to miss.

Sharing the headline slots with Sundara Karma, are the equally talented Tom Grennan and Metronome. Golden-voiced Grennan who has had an unbelievable few years, has been working hard and can now revel in the success of his debut album Lighting Matches, which he released last summer. In case you’ve been under a rock, Grennan made a name for himself after some fantastic collaborations with the likes of Chase & Status and Bugzy Malone. Now coming of age and deservedly carving out a space for himself, Tom Grennan will bring true fun to the line-up. He recently tweeted that his Live At Leeds performance is ‘getting SMASHED, no question’, so this will be a killer show for sure.

2019 marks the release of the 10th Anniversary Edition of Metronomy’s second album Nights Out and again, another great reason to go and party with the electronic band that have never followed the rules and created genre defining songs such as ‘The Look and The Bay.’

The acts at the top of the Live At Leeds bill however, aren’t the only ones that you should be paying attention to. There is such a diverse wealth of talent heading to the West Yorkshire town, so be sure to catch the likes of phenomenal punk trio Dream Wife, whose set will empower you whilst blowing your ears off, and make sure that you’re at the front for what will be a hell-rising performance from Black Honey. Once that’s done, go and dance along to some Ibibio Sound Machine, who will transport you to the forests of African electronic beats. If you’re still in need of some guitar led infused mellower sounds, then make your way to the WhenYoung gig or go and witness the very harrowing tones of rising popstar Sam Fender.

Don’t forget to pay attention to all of the names printed at the bottom of the festival artwork. Future stars on at that part of the event poster, include Liverpudlian indie-rock singer Zuzu, Sports Team, whose lead singer has hips that could definitely give Mick Jagger a run for his money. Other acts that are worth running across town to catch include bands, Goat girl, Hotel Lux, Cassia, Fatherson, and solo acts, Kojaque, Hak Baker, Pizza Girl and Millie Turner.

This year’s line-up for Live At Leeds is insane and although you will be running from one venue to another in a crazy attempt, to catch as much new music as you can, it will all be worth it. So this May Bank Holiday, make sure that you’re in the mood to party and head to Live At Leeds to discover your new favourite artists and have a great time.