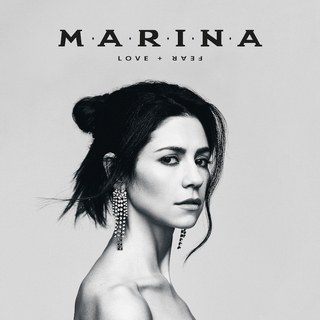 The grey picture of Marina Diamandis on Love + Fear’s cover and dropping Diamonds from her name suggests the follow-up to FROOT is a grownup affair. In interviews, Marina talks about how her recent psychology studies make this album closer to revealing the real her. Sadly, any hopes of an exciting reinvention are dashed — these songs lack the sparkle and engagement of her best work. Weirdly, by avoiding playing a character and making a personal statement, it’s made it harder to connect. These beige songs act as something of an artistic regression.

The album is split into two parts. Love, like FROOT, starts with a ballad. Unlike the devastating ‘Happy’, ‘Handmade Heaven’ is a generic and underwhelming intro. ‘Superstar’ follows and is interchangeable and lifeless. The trend-chasing chorus has a necessary  tempo change, but still falls flat. On FROOT she perfected her nuanced ballads (especially the show-stopping heartbreak of ‘I’m a Ruin’) with just the right amount of vulnerability and personality. These songs seem disappointingly empty in comparison.

The latest single, ‘Orange Trees’, attempts to lift spirits with its theme of escapism and its light summery vibes. The decent groove underpinning the chorus can’t hide the faceless feeling of forced fun. ‘Radioactive’ (2011) showed Marina could do radio-friendly without sacrificing her idiosyncrasies. When the Clean Bandit collaboration, ‘Baby’, appears the album’s already starting to drag. Unremarkable as a single, it sounds slightly better in comparison to the vapid album start. It’s easy to see why ‘Baby’ didn’t take off compared to Clean Bandit’s run of huge hit singles. Their previous collaboration (‘Disconnect’) would have been a more welcome inclusion.

The rest of Love is padded with sterile songs that leave barely any impression and add nothing to the progression of Marina as an artist (something she handled brilliantly on FROOT). ‘Enjoy Your Life’ aims for the effortless 80s pop of Carly Rae Jepsen or Shura, but lacks the charm. The clumsy self-help lyrics — “sit back and enjoy your problems” — sound trite, whether they’re aimed at herself or the listener. In the past she articulated her feelings of self-discovery and reflection with a quirkiness and self-awareness that set her apart from her contemporaries (even some of her more awkward lyrics worked due to her performance). That’s all but disappeared here, and so has her use of her unique voice to add colour and personality to her compositions.

‘To Be Human’ is Love’s worst offender due to the cringe-worthy lyrics — “there were riots in America just when things were getting better. All the things I’ve done and see, still I don’t know what life means”. She has nothing to say and the plodding tepid chorus is a far cry from hook-filled songs such as ‘Blue’ and ‘Froot’. When the lovely Yazoo-styled synths of, ‘End of the Earth’ close the first half, it accentuates the mediocrity of everything that came before with a simple and effective chorus. Her accompanying vocal is gorgeous and gives a glimpse of how captivating Marina can be.

‘Believe In Love’  is a pleasant introduction to Fear thanks to the bubbling synths and warm, unassuming chorus. Marina states she, “shouldn’t take fear so seriously” and “needs to believe in love”. For all the pre-album interviews about how she’s done some serious soul-searching in recent years, it’s a very simple message.

On ‘Life Is Strange’ Marina aims for deep insights and comes to a vague conclusion —  “don’t know what I’m doing with my life, but maybe there’s no wrong and right, cause everybody feels the same. All I know is life is strange”. The stabs of strings are one of the few memorable musical hooks. The identikit production and bland songwriting creeps back in on the rest of Fear. The vocal effects on the chorus of ‘You’ are deeply grating and the music sounds like an afterthought.

There’s a glimpse of the old Marina in the way she sings, “oh my god I think it’s karma” on ‘Karma’ but the tropical house backing track has nothing memorable about it. The same goes for ‘Emotional Machine’, which has a typical Marina quirk in how she delivers the chorus, but is let down by the anonymous underwritten music.

Lyrically ‘No More Suckers’ has the most character thanks to, “you eat all of my food, you mess up all my towels, but this time I’m checking out”, but her delivery lacks bite. ‘Soft To Be Strong’ is a slight improvement and is a relatively satisfying closer, even if it doesn’t quite hit as hard as her best ballads.

Albums like The Family Jewels and the underrated FROOT succeeded because her reflective and emotional lyrics resonated and were paired with fearless execution and clear identity. She was out of step with the pop trends of the early 2010s and was an acquired taste — which worked in her favour. Now she sounds a couple of steps behind.

It’s clear that Marina is happier now and that’s a good thing. Great art doesn’t have to come from people suffering. It’s a shame that in trying to spread that positivity, she’s lost her edge and stripped away what made her endearing. The lightweight playlist-pleasing pop of these songs blends into the background and sounds boring, something she always avoided. Hopefully Love & Fear isn’t representative of the rest of her career, because Marina is so much better than this unremarkable project.