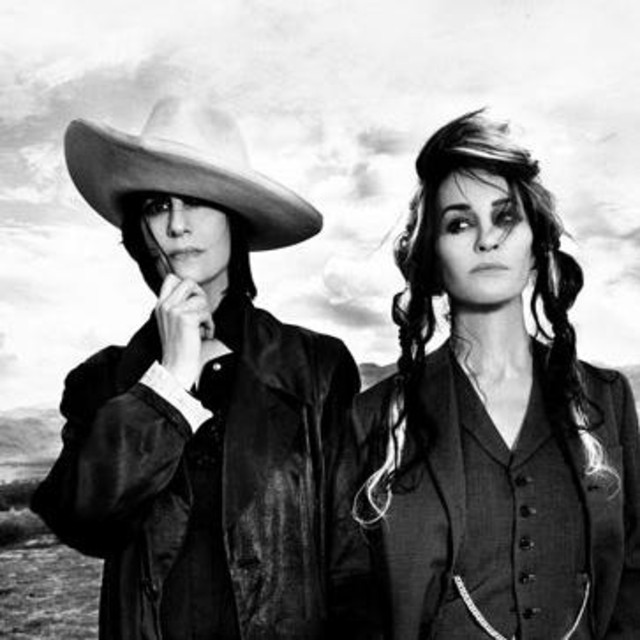 Shakespears Sister has figured grandly in GIITTV recently but we thought this single and video merited featuring the reformed duo again.

As reported last week, Siobhan Fahey and Marcy Levy (aka Marcella Detroit) kissed and made up and have already written two songs, both of which will appear on an album, ‘Singles Party’, which will be released in July, along with re-mastered versions of classic tracks. This is the first of them, ‘All the Queen’s Horses’, which was released on 15th May, along with a clever little video, which was produced by Sophie Muller, who worked with them decades ago on the videos for ‘Stay’, ‘Hello’ and others.

There will also be a comprehensive UK tour later in the year with, according to a TV interview I’ve seen today, “a lot of technical wizardry”.

The first thing you appreciate about the song and the video is that both parties have got a sense of humour. Even getting back together when one of you is old enough for a bus pass and the other isn’t far off it, proves that.

But then again, both their songs and videos always had those qualities anyway. The title alone clearly plays on Humpty Dumpty’s “all the King’s horses and all the King’s men couldn’t put Humpty (here: ‘us’) back together again”. A reference I suspect to the many who had tried to reunite them across the decades.

The video was shot at Joshua Tree National Park in California, which holds a resonance for both of them, and speaks as loudly as the song. With a distinct flavour of a Sergio Leone-directed, Ennio Morricone-scored Spaghetti Western, Marcy Levy even seems to adopt the persona of the cheroot-smoking ‘Man with no name’ at the beginning and again at end as she at first declines to take Fahey’s hand, then can’t snatch it quickly enough.

It is chock-full of symbolism. There are subtle, subliminal interjections of previous videos, notably ‘Stay’ of course, which appears frequently, but blink and you’ll miss them. There’s a delicious moment in which Levy’s deceased lover in ‘Stay’ appears dead on the pool table, Levy again fawning over him while Fahey, reprising her Angel of Death moment this time from behind a bar, dismisses the scene with a contemptuous glance away. Then there’s a section in which they appear to be involved in a tug of war with whom? – members of Bananarama? Or is it just the two of them, in their different personas?

Equally delightful is a glimpse of the ‘A Woman’s Work is Never Done’ sign being cleaned by Levy as Fahey verbally assaults her (in ‘Hello’ it was a put-upon Fahey who had that job, while a seated, guitar solo playing Levy looked on, bored and yawning). As the slogan to that video said, ‘As one door closes, another opens’. It’s a pity it took 26 years.

The lyrics are cutting as they indulge in the ultimate on-air slanging match, one that might also have finished off Jeremy Kyle. “You come to me with  promises you can’t keep”…”you shot your poisoned dart”…”you took my innocence my money and my pride” are amongst the barbs they throw at each other, but then, crucially, jointly, a smile illuminating Levy’s face, “but you can never take the love I keep inside”. Aww, bless.

Then to cap it all there are a couple of lovely little harmonica breaks from Levy.

Both of their voices appear to have held up well but the ultimate proof of that will be the live shows. In the early part of the video Marcy seems to have aged better while Siobhan, who is six years younger, looks like my cousin Denise, who is in her seventies. (I hope I’m not starting anything here). And to be fair, Siobhan does look considerably more glamorous towards the end.

Glamour isn’t what these two are about though. They are ace songwriters and imagineers, who have been apart, from us and from themselves, for far too long. This is a great track, but I wouldn’t have expected anything else.  Hopefully, there will be many more of them in the future. They have a lot of lost time to make up.

2 thoughts on “NEWS: Shakespears Sister’s first single as a duo in 26 years is a comical trip down Memory Lane”