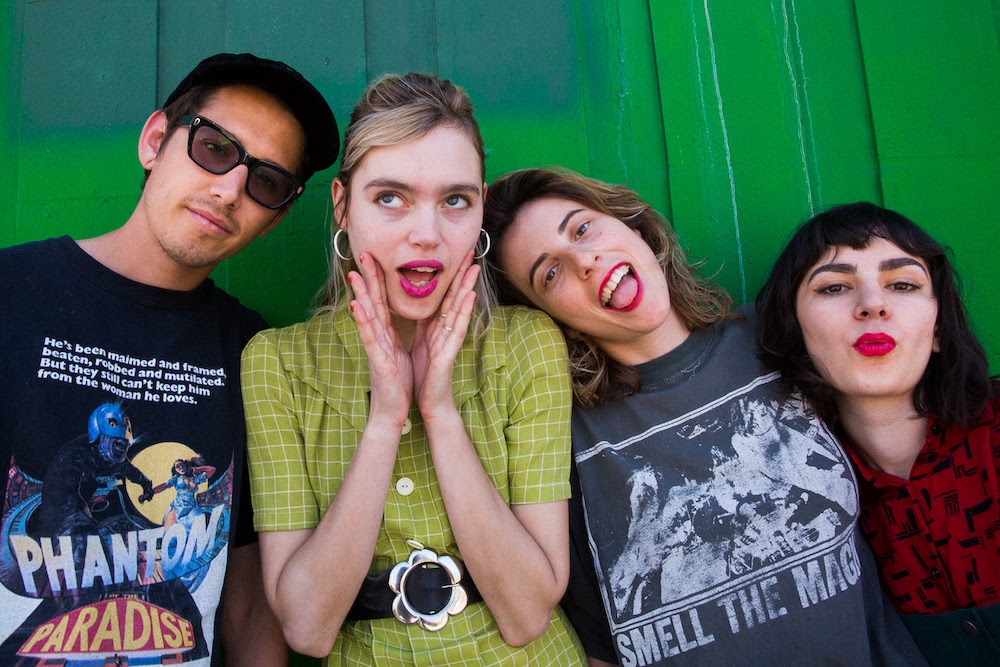 What? Trade Our Sins

What they say? ‘Trade Our Sins’ is a cautionary slowdance fit for the end of the night or the end of the world. Desire’s doomsday has arrived, and as vocalist/bassist Staz Lindes warns “the train is coming” over a simple waltz of guitars and keys.

Why we love it? A mellange of lovelorn 60s girl group melodies and nifty waltzing riffs, mellotron keys, and smearing it with vocals that sneer like the best bubble gum punk. This is the sound of a snatched moment of lust, a tryst in the station restroom before the train arrives. The sound of doomed love at the end of the line. Its also a cracking tune. (BC)

FFO: The Shangri Las, The Vivians

What they say? Written in France and a song about submission, ‘deux’ combines ROKKY’s signature tough dance beats with a sensual French lyric- – “it’s great synth wave sound and a vocal that is so raw and relaxed.”

Why we love it? Twitchy beats, prodding guitars and sultry refrains its like a midnight trip though Parisian backstreets. Subtle, evocative and floor-filling. (BC)

Who? Amyl and The Sniffers

What? Gacked On Anger

What they say? ‘Gacked On Anger’ is 100 seconds of fury at life on the breadline.

Why we love it? Australia’s most ferocious garage punks have dropped another riotous belter at the perfect time. ‘Gacked On Anger’ encapsulates the mood of their native Melbourne in the light of recent national election results (The dickheads won again, basically). It’s exactly the kind of noisy, slapdash clatter that the world needs to hear right now. Crank it up. (NK)

What they say? “It’s about giving into fallacies, internal and external, without too much resistance.” Says frontman Euan Hinshelwood, “Believing things about yourself and others that just aren’t true, like you no longer know where the start or end point of anything is. And then realizing you probably shouldn’t take things so seriously all the time, and just be a bit lighter of thought.”

Why we love it? Younghusband’s welcomed return supplies effortless, twinkling melodies which drive steadily towards their destination. Warmed by saxophone sounds and propelled by a motorik basseline, the track is a bright, yet quietly complex take on how we perceive ourselves and the world around us. (NK)

What they say? A psych symphony in two parts and sounds like a cross between the noise of My Bloody Valentine circa Isn’t Anything and Pebbles-style garage, but with an icy synth sheen worthy of Martin Hannett.

Why we love it? Billowy and swirling like a 80s horror soundtrack. The stomping with drums, layered with more striking synth laden stabs, and shivering female vocals that appear like an apperitions in the night, while reverb guitars spirrall through dark skies, it offers more shadowy and unseen depths than their previous outings. Merging into a epic psych heavy jam in its second portion. Awesome. (BC)

FFO: My Bloody Valentine, The Cure, Esben and the Witch

What they say? “The song was inspired by a relationship I was in, where I felt fully committed to this person, and eventually, it became one-sided. He didn’t seem to care about me, but he put more effort in when I acted the way I thought he wanted me to. The song is split between a vulnerable submissive side and one where I felt powerful and comfortable with being myself.  At first, writing this track was emotional, but the more I started writing the more empowered I felt. My new record takes you on a journey through each stage of a relationship. I chose black & white for the artwork because it’s only what someone on the outside can see.”

Why we Love it? Shifyong focus from intimate gitar line and stark vocals,into a rnb beat heavy sway laced with a regret of trying to change to please the one you are with. Rather smart, subtle and a insidious ear worm that blurs pop, rnb and electronic sounds. (BC)

What? On and On

What they say? “’On and On’ is about keeping everything deep down inside and driving yourself mad with the same looped thoughts. The lyrics repeat because when you can’t get out of this way of thinking, it feels like ‘this thing goes on and on and on. We’ve been opening with On and On for a while. It sets the scene for us because it’s stripped back and has an urgency we want to come across with our music. We’re really excited to get it out there after a busy few months supporting Sleaford Mods”.

Why we love it? Further proof of why everyone is falling in love with LIINES. Post-punk perfection; understated, Joy Division meets Siouxsie and the Banshees. From the superb rostrum at Reckless, Yes. (JA)