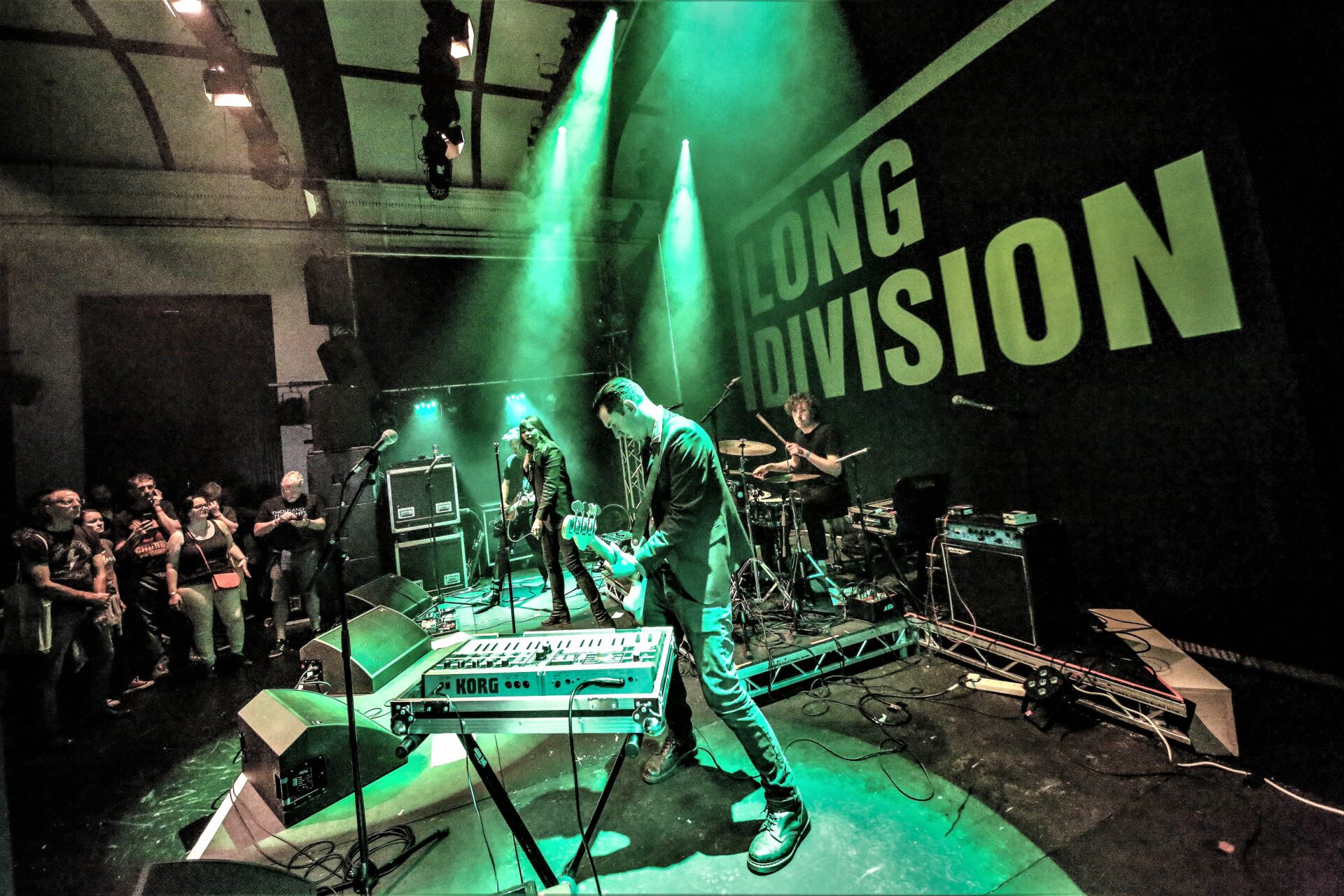 By the time we got to Wakefield on Saturday lunchtime, this year’s Long Division Festival was already into its fourth day. The event had begun on Wednesday evening when it joined considerable forces with Artwalk Wakefield to take part in their established, alternative night out, one that features every two months and sees various venues opening their doors for a range of visual arts, crafts, workshops, and live music performances.

During the day on Friday, a wide range of community-based activities took place whilst at night The Big Fat Festival Quiz was held in a pop-up marquee in the city’s Bull Ring. This huge charity quiz was in aid of Andy’s Man Club, a charitable organisation has been set up in response to the significant problem of suicide being the biggest killer of men who are under the age of 45.

But Saturday was, and is still is the big day in the Long Division Festival programme. Since its inception in 2011, when Festival Director Dean Freeman cashed in his NHS pension to start the event, Saturday from midday until midnight and beyond sees a huge raft of musical acts performing at various locations across the city centre.

This year is absolutely no exception in that regard with more than 60 acts – both established and emerging, with Long Division’s enduring commitment towards promoting local talent still very much to the fore – scheduled to perform at more than a dozen venues and that is before we even begin to talk about the top-notch comedy and spoken word programmes which will run throughout the day in the Town Hall and Art House respectively.

Since God Is In The TV was last at Long Division in 2016, and whilst the festival’s strong emphasis upon the promotion of musical independence and DIY culture remains totally undiminished, much else about the event has changed. In 2017, the festival took a sabbatical before returning again last year. In the interim, Dean Freeman had sought to develop the festival’s structure, working with the council in an effort to promote the tourist aspect of the city. Towards this end, 90% of last year’s event was free access and by virtue of shifting 3,500 tickets it very much achieved its objective of bringing many more people from outside the city limits into Wakefield.

Having worked in the city for over a decade in the first part of this millennium, I can readily attest to the fact that whilst Wakefield may well be only 12 miles due south of Leeds and about double that distance north of Sheffield, it could just as easily be a million miles away in many people’s eyes such is the often parochial perceptions attached to it. Furthermore, as a consequence of this it does appear to regularly suffer adversely by way of cultural comparison with its bigger Yorkshire city neighbours.

But Long Division has gone, and on this year’s evidence is still going a very long way to placing Wakefield firmly on a much wider cultural, cosmopolitan map.

The locations of some of the venues have changed since we were last here – for example, Unity Works, the city’s music and arts venue around which the 2016 event had been built, went into administration two years ago – but the ones that have since emerged are still interesting and imaginative additions to the Long Division roster and unlike similar city festivals all remain within very close proximity of each other. It is said that the greatest walking distance between the two “outermost” places – by my rough reckoning Wakefield Cathedral and Henry Boons pub – is only about six minutes. 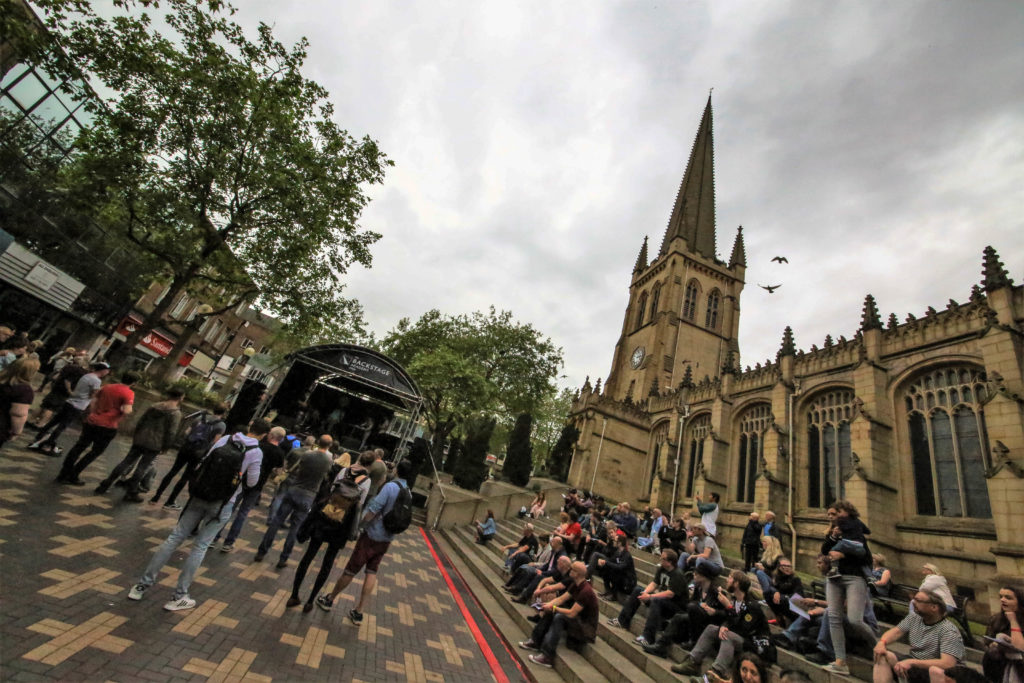 But despite the relative closeness of the venues it is still a physical impossibility to see every single act and with this comes the perennial dilemma that faces every single festival goer, that of making difficult decisions about who to see. What follows is a trajectory of God Is In The TV’s Saturday at Long Division 2019…

Our first destination is the Counting House, the former Yorkshire Penny Bank building, and our first act of the day is TIGER by the TAIL. As crowds start to slowly build in the city centre, the Leeds-based duo make for a perfect introduction to the day with their experimental blend of heavy-duty electronics and breathy, cinematic vocals.

A few hundred yards away at The Hop – one of half a dozen free access venues, each one with a shared aim of promoting local acts – the Pontefract sextet Macroscope like many, many more besides are making their Long Division debut. They are followed onto the pub’s compact stage by Newcastle’s Fossway, both bands impressing with their energy and verve.

Their shows are bisected by a short stroll back to the BBC Introducing in Yorkshire Stage at The Precinct, set up in the pedestrian-only zone beside the city’s magnificent Anglican cathedral. Dewsbury’s Knitting Grooves set in motion four wonderfully diverse sets on this stage highlighting the great variety and range of the music that Long Division consistently features. Living Body , who have just released a new single, C.R.E.A.M. which can be found on this year’s Long Division 12” vinyl compilation; last year’s Best Unsung Artist at the annual MOBO awards, Graft; and closing out The Precinct stage to a whole bunch of unsuspecting late afternoon shoppers emerging from The Ridings with their intense, snarling blast of garage-rock Dead Naked Hippies, during a feral performance that culminated with charismatic frontwoman Lucy Jowett leaping off the stage and wading knee-deep into the crowd. 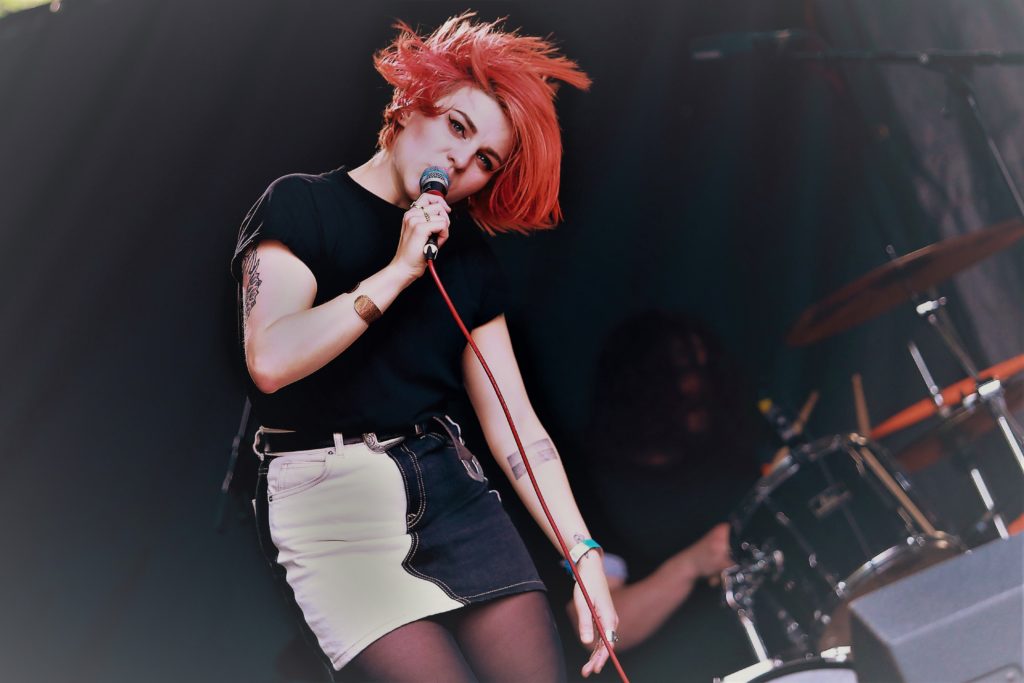 The perfect counterbalance to all of this fun, filth and fury can be found by walking up the adjoining steps and into the perfectly serene surroundings of the cathedral itself where Leeds’ James Mabbett has taken over the building’s nave with the latest chapter in his ever-evolving Napoleon IIIrd project, one of nine Onto The Streets’ commissions at this year’s festival whereby local artists were invited to “animate public spaces and shine a fresh and alternative light on Wakefield”. Comprising sound, vision and performance the ecclesiastical environment lends itself perfectly to Napoleon IIIrd’s exploration of “the impact of the city on both individual and group happiness”.

Down Westgate at Henry Boons, Huddersfield’s Knuckle attract one of the bigger crowds of the day, with punters spilling out into the street outside this popular pub to hear the trio’s powerful take on garage blues. Later in the evening York’s Cowgirl put in one of the performances of the day at the same location with some blisteringly dirty rock’n’roll that fused very early 70’s Neil Young and Crazy Horse with The Jesus and Mary Chain into a bare-knuckled assault on the senses. It seemed perfectly fitting that both of these bands should play the day after the sad news of Roky Erickson’s passing, as they each in their own way carry on the great psych-rock adventurer’s vision of what is really meant by modern rock’n’roll. 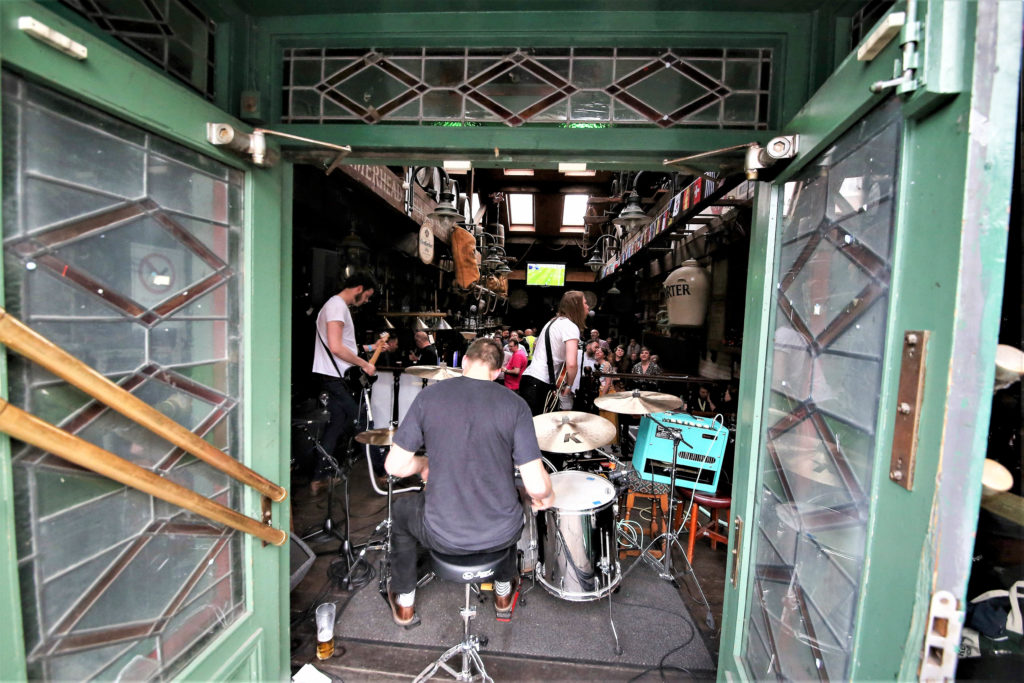 As afternoon merges into early evening, we concentrate on some of what would probably be described as the more established acts, beginning at the Mechanics’ Theatre, the historic Grade 2 listed former Wakefield Museum building. If she hadn’t done so already, Liela Moss’s performance here confirms her artistic evolution and further emergence out of the shadows of her work with The Duke Spirit into a bona-fide artist in her very own right. Featuring songs from last year’s excellent My Name Is Safe in Your Mouth album – ‘Wild As Fire’ and ‘Salutation’ are both immense – she goes back in time to sign off with an absolutely cataclysmic interpretation of ‘The Dog Is Black’, her collaborative effort with UNKLE from 2011.

Apart from a brief sojourn back to the Mechanics Theatre mid-evening to see the legendary Glaswegian trio Bis – who deliver a cracking little set full of nostalgic snap, crackle and disco-pop and, yes of course they do play their 1998 smash hit ‘Eurodisco’ – the rest of the evening is spent travelling along the axis of Smyth Street that connects the Theatre Royal and Warehouse 23, Long Division’s biggest venue. 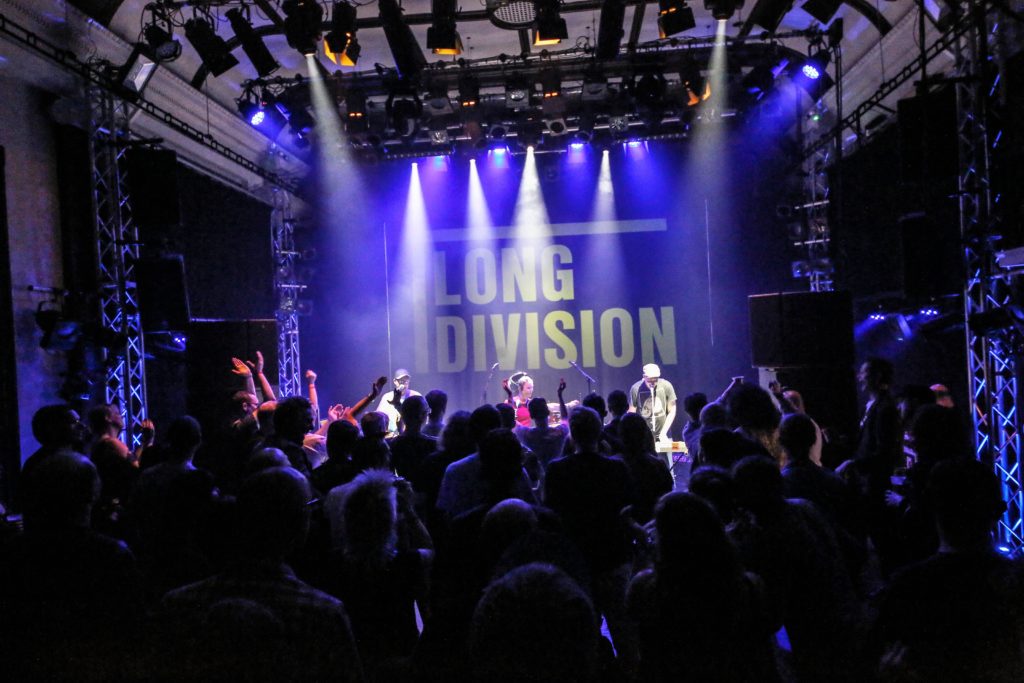 What this trip up Westgate c. 9pm also affords is an interesting insight into how the three elements of Long Division, Wakefield’s more traditional night-time economy and a highly visible homelessness problem all merge in what to these eyes at least did seem to be a harmonious union, but did highlight some of the stark social differences that exist in this city, inequalities that by virtue of the free access part of its programme, Long Division is in some small way trying to help offset.

Night time is the right time for the festival headliners and they come thick and fast, one after the superb other. Bill Ryder-Jones proves, yet again, that he probably has no equal in contemporary music when it comes down to marrying melancholy with melody. Asian Dub Foundation may well have been at this game for more than a quarter of a century now but age has not diminished the energy of their remarkable fusion of punk, dub reggae, bhangra and rap or the power of their political message.

Between them, Aidan Moffat and RM Hubbert have fashioned the subjects of shagging and death, dysfunction and displacement into veritable art forms. You still leave their performances not knowing whether to laugh or cry and life is all the better for having them in it. And Penguin Cafe sees Arthur Jeffes as the keeper of his father Simon Jeffes’ (the man behind the Penguin Cafe Orchestra) flame, whilst also carrying the torch of this beautifully elegant music into the future. He merges old with new, juxtaposing his father’s ‘Perpeteum Mobile’ and ‘Pythagoras On The Line’ with much newer material like ‘Chapter’. 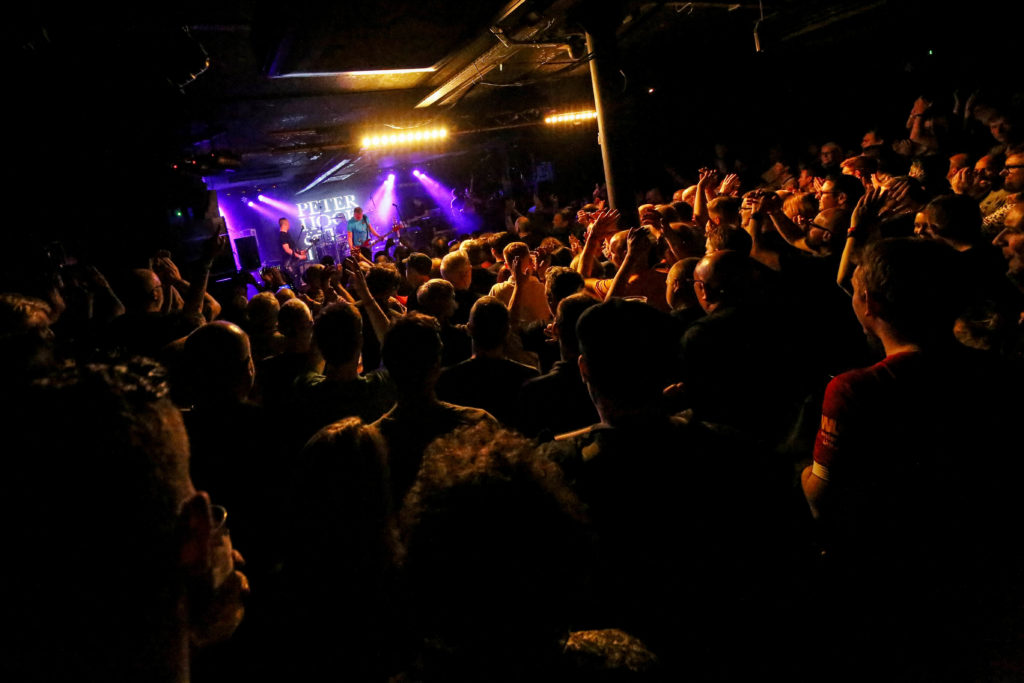 Peter Hook & The Light never disappoint. Here Hooky connects his previous worlds of Joy Division and New Order with a quite staggering version of ‘Ceremony’, one of the last songs written by Joy Division whilst Ian Curtis was still alive and the very first record released by New Order following his death. He finishes with ‘Love Will Tear Us Apart’ bringing to a triumphant conclusion yet another incredible day’s music courtesy of Long Division, an ideal multi-venue metropolitan festival for this day and age.

More photos from Long Division 2019 can be found HERE