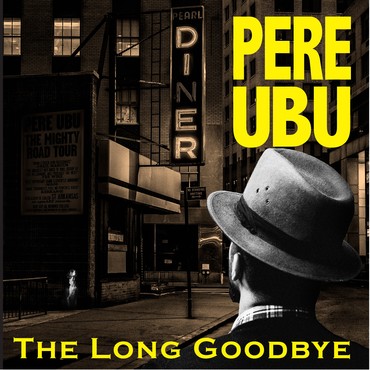 It’s been a while since I, personally, greeted the sounds of David Thomas and his cohorts, from the strange, but compelling world of Pere Ubu. They have described their sound as “avant-garde” and as a painting by Picasso might have at first appeared out of place at the turn of the 20th century, it’s now accepted as work of genius. It was with this same beguiling aura that I met their collaborative album Long Live Pere Ubu 10 years ago.

As the album opens, it’s like I’ve never been away, with the driving tempo & bizarre backdrop that is so familiar to Pere Ubu. ‘What I Heard On The Pop Radio‘ chimes in and it’s like meeting an old friend: even after 10 years, the person is still recognisable – the lines on their face, the greys combed through their hair, doing nothing to stop the identification. In this case, it’s the brash chords, the strange mechanical movement acquainted with this artist, that make this piece of music such a happy union. So when the tempo swiftly changes as ‘Marlowe‘ is fed to the ear, the sharp bend in the road is nothing this artist cannot handle. When ‘Flicking Cigarettes At The Sun‘ passes in a thundering passage & the aptly named ‘Road Is A Preacher‘ comes into view, Thomas at this point pleads with the listener – “Can I get a witness..?“, borrowing briefly from Marvin Gaye in a manner the great man may find unusual, but not unacceptable.

Like paintings hung in a gallery – the gallery, in this case, being The Long Goodbye, masterpieces take a strange and unnerving light. Where the following number, ‘Who Stole The Signpost?‘, with its continuing movement, proves the metronome is indeed the heart of the music. With Thomas singing his vocal commentary, to what I have yet to figure, but with wonderful hypnosis, I have once again fallen under their spell. It’s almost narcotic. I have been here before when I first listened to Long Live Pere Ubu, I just couldn’t put it down for weeks. And as “The World (As We Can Know It)” strikes up, the tick, tick, tick sets the rhythm yet again under the almost child-like melody, where are we now?

As ‘Fortunate Son‘ is next, I feel this is the first time the listener is offered an insight into the mind of David Thomas. Played to a sinister melody, the commentary starts out “Yeah, I hear voices in my head, that’s me, my voice. The problem with crazy people is they don’t recognise their voice is their own, the one voice you don’t want to be alienated from – is yourself, that’s gotta cause problems…” He then continues to explain somewhat the situation we now find ourselves in and why we are here. It’s almost like the abstract paintings are taking shape and not just a liquid mess.

The penultimate 2 tracks take the form of long rambling accounts, first exclaiming “The air itself is black!” in the bleak, yet descriptive ‘The Road Ahead‘, the second ‘Skidrow-on-Sea‘, a somewhat familiar story of our own seaside towns, until the vocal line chimes in… “This Town is rotten to the core.” This time perhaps an account of Thomas’s beloved Los Angeles, seen through a smog?

We end up quite aptly with ‘Lovely Day‘, a brief moment in time, played to a squeeze-box, this time proclaiming “It’s a lovely day by the sea.”, then heading off in a more sinister vein, with “Mister Potato Head strumming a guitar” and “The beggar on the bench acting lewd and crude“, well you get the picture. Or maybe you don’t? But further investigation is certainly worthwhile. Oh it’s a lovely day.

So that’s almost it, Pere Ubu’s The Long Goodbye, I certainly hope not as there are a further 15 hard to find albums I have yet to explore! Well I said ‘almost’ it, as with this 10 track album comes a bonus 15 track “Live” set, performed in Montreuil, where Thomas first announces the coming of this work, whilst telling his audience that “the first time we played these songs was 2 days ago” and there “may be some rough edges“. Then in this introduction he explains exactly where The Long Goodbye comes from – my concern was laid to rest. I got the feeling that this set was the proving ground for the album that would come, with these 14 songs condensed into 10, those glorious “rough edges”, making up what is in-fact a tub-thumping affair, so much so that I have no reservation in awarding this somewhat unusual product a perfect score.

The Long Goodbye is released on 12th July through Cherry Red.