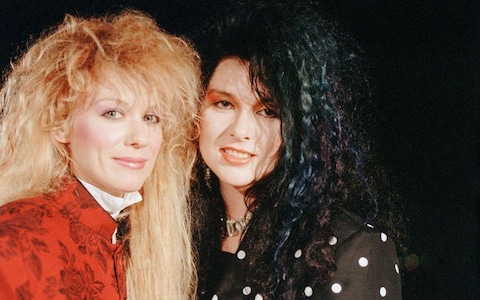 An argument could be made that this song doesn’t qualify for the category of a pop classic as Heart is a band that was influenced by folk music, heavy rock and even heavy metal. I doubt though that many of the 160 million who have watched the performance of this song on YouTube think of it as anything other than a superpower ballad. Nor the Radio 2 DJs who still offer it up religiously.

There is little argument about the quality at the core of Heart; the sisters Ann and Nancy Wilson. Ann has consistently been nominated for the ‘greatest female rock voice’ title (she’s the female equivalent of Freddie Mercury to some) while Nancy unfailingly turns up right at the very top of lists of the ‘greatest female guitarist of all time.’ An amazing and extremely rare combination.

Heart wasn’t their band. It was formed out of another one, The Army (1967) (ironically the sisters are from a military family) which then became White Hart and subsequently Heart. Even when Ann Wilson joined in the early 1970s it changed its name again, to Hocus Pocus. She was followed by Nancy (1974) when she fell in love with the brother of an original band member who had dodged the Vietnam draft and fled to Canada.

That led to the growing band moving to Canada where they became established in Vancouver before breaking through in the U.S., working out of Seattle.  Mainstream success came in the late 1970s though not without some of the many controversies that have dogged them including a bizarre allegation by a journalist that the sisters were having an affair with each other.

Then they went into a period of decline in the early 1980s before making a comeback from 1985 when they moved to Capitol Records and, along with it, had a glam-rock makeover. It was on the second Capital album, ‘Bad Animals’, that they included ‘Alone’, part of a shift away from their original folk and acoustic leanings (even today Nancy Wilson is thought of more as an acoustic specialist)  towards a bigger, fuller arena rock sound. ‘Alone’ reached number one on the Billboard Hot 100, and ‘Bad Animals’ became the band’s first top-10 album success in Great Britain, peaking at number seven on the UK Album Chart.

In 1995, Nancy took a break from music to concentrate on raising a family and Ann toured with a band of her own. They reformed in 2002, releasing four albums through to 2016, and being inducted into the Rock and Roll Hall of Fame in 2013. Their Hall of Fame page described the Wilson sisters as the first women to front a hard-rock band, and “pioneers … inspir[ing] women to pick up an electric guitar or start a band.”

They played a show at the Royal Albert Hall in 2016, just before the release of their last album, in which they were backed by the Royal Philharmonic Orchestra. Shortly after came another controversy this time involving a charge against Ann’s husband for assaulting Nancy’s children, which effectively broke up the band again. That hiatus ended in February of this year when they announced a huge U.S. tour through to October. No UK dates have yet been announced.

There is great diversity in music styles, evident in their chart successes with singles on Billboard’s Hot 100, Mainstream Rock Tracks, and Adult Contemporary charts and the band has been labelled as hard rock, folk, easy listening, heavy metal, and adult contemporary, with style variations on the same album. The title song of the most recent album, ‘Beautiful Broken’, saw Ann Wilson swopping vocals with Metallica’s James Hetfield.

For all that I’m sticking to my guns. ‘Alone’ is a pure pop gem. Ann’s fantastic soprano voice and Nancy’s precise guitar work endeared it to me the very first time I heard it and any time I do now, everything else stops.

Both sisters can still perform live although they don’t throw themselves about like they used to. At the 2016 Albert Hall show Ann achieved the final note of ‘Alone’ with ease but chose not to sustain it, which is a pity because it is one of the most dramatic song ending vocalisations in contemporary music.

The most amusing and liked comment on YouTube about this song is “How can I get you a loan?” Surprisingly, it has apparently never been used by a loan company in an advert.