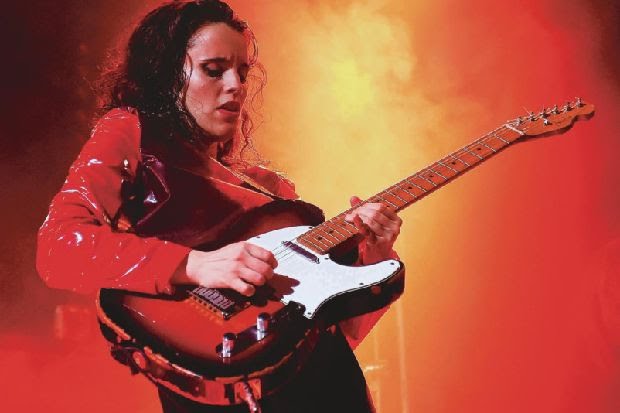 Whilst there’s no doubt that her self-titled debut and its follow up, One Breath, were excellent records, last year’s long-awaited Hunter saw Anna Calvi take things most definitely up a gear or two. Shortly after the release last year, I witnessed her in concert at Glasgow’s St. Luke’s and observed that selling out the legendary Barrowlands Ballroom – just around the corner – was completely within the bounds of possibility. Tonight’s gig on the Scottish East coast is a much bigger venue, and if last year’s gig was magic, then this one was positively sorcery.

Opening with ‘Hunter‘ it’s clearer than ever just how much of a kiss-ass guitarist Calvi is. With lighting used sparingly, this builds more dramatically than on record with a stunning solo. To describe it as intense is to offer a compliment, and this gig is further proof of her strengths not only as a writer, but as a performer. Listening to the album on the way over, I was reminded just how brilliant it is, and it’s a pleasure when you’re at a gig that features so much of the latest album. ‘Indies Or Paradise‘ and album opener ‘As A Man‘ are fantastic, amongst the reminders of how those who rushed to champion her when she first emerged included Brian Eno and Nick Cave. ‘Swimming Pool‘ is as ever, sublime on the surface, and yet hints of danger lie beneath. Should she wish to become involved in writing film soundtrack, then the results could well be explosive.

Of course, it’s not just the guitar work that’s impressive. There’s that voice. How many female singers, usually working in a rock idiom, draw so much from opera? She’s a pretty unique performer. When I rack my brains to think of those who she compares with, it’s more that she gets listed along with other strong female performers, rather than thinking of a list of those to whom she indebted. She is one whom it would appear the mould was broken straight afterwards.

Perhaps her best known song may well be the bewitching ‘Suzanne & I‘ from her debut, which gets a huge cheer. It is, after all, amazing, but it’s hard to think that there will be people who have just waited all night for that song alone. When she finishes the gig with a cover, in lesser hands it could be a lack of confidence. Not so when she takes on Suicide‘s Ghostrider,’ a song that appeared on her 2014 EP Strange Weather, and which she truly makes her own.

The audience make their way into the August evening drizzle as if enchanted.