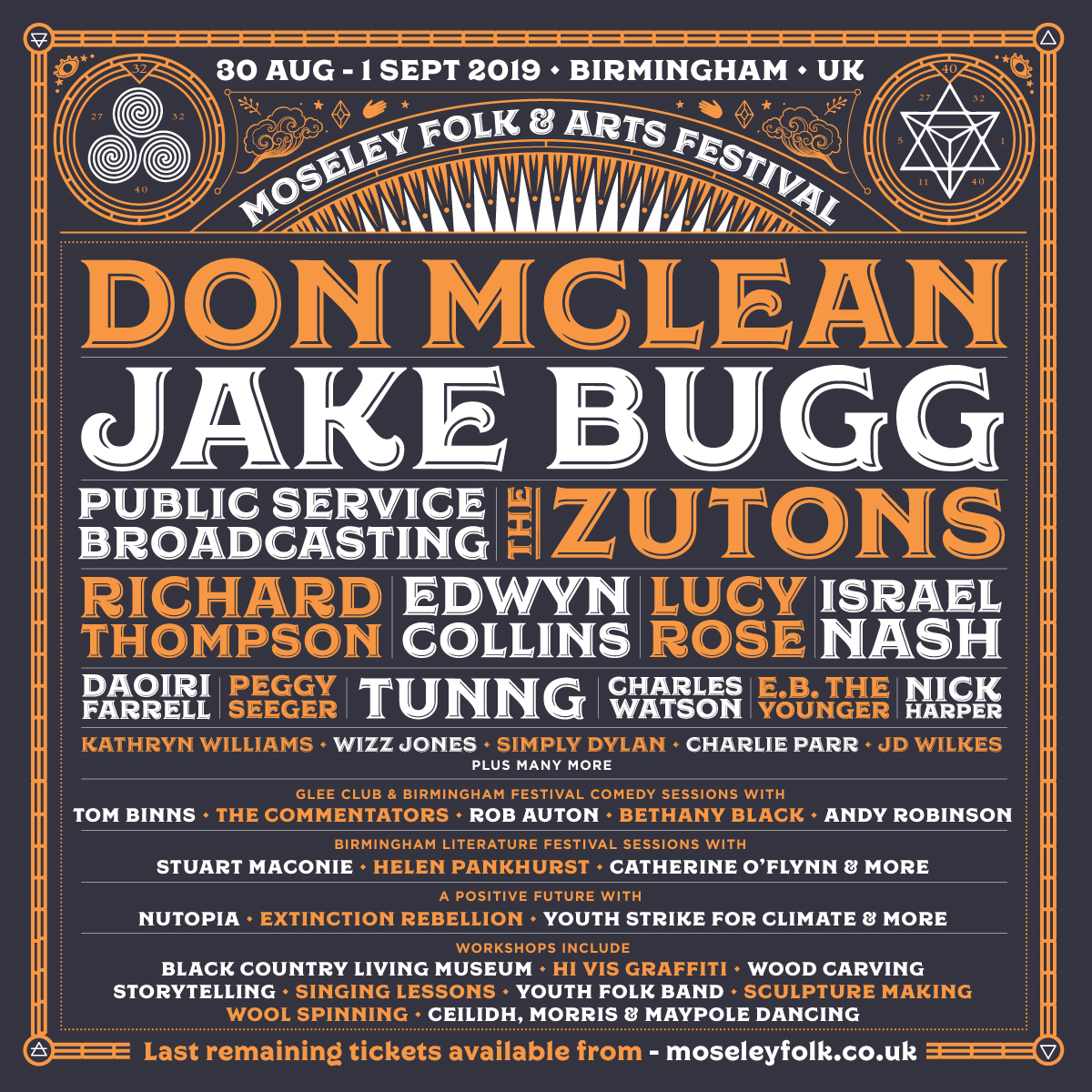 It is hard to believe that it is now almost five months since Moseley Folk & Arts Festival first announced details of its full music line-up for 2019, revealing a cracking bill that included headline slots for Public Service Broadcasting (Friday), Jake Bugg (Saturday), and Don McLean (Sunday) plus such luminaries as The Zutons, Richard Thompson, Edwin Collins, and Lucy Rose amongst an exceptionally strong supporting cast.

But now here we are just a little more than a week shy of the actual event and it is abundantly clear that in the interim period the organisers have been extremely busy expanding and developing their programme of entertainment for the entire weekend into what is clearly an even more spectacular schedule.

Returning to the rather wonderful surroundings of Moseley Park (a couple of miles due south of Birmingham city centre) for what will be the festival’s 14th annual outing, these fresh developments in the festival’s programme include the relocation of the Kitchen Garden Stage to the new Folk On The Slope area positioned in front of the park’s beautiful lake. This stage will play host to, amongst many others besides, the highly acclaimed English singer-songwriter and guitarist Nick Harper presenting a show about his childhood and life growing up in a musical household (his father is, after all, Roy Harper); celebrated folk musician Kathryn Williams; and the Minnesota-based folk blues artist Charlie Parr.

Running alongside this extensive music line-up will be a fantastic Arts Programme, including best-selling author and BBC 6 Music presenter Stuart Maconie giving a talk about his book ‘A Long Walk From Jarrow: A Journey Through Britain Then and Now’ as well as leading a Q&A with the American folk singer, songwriter, feminist and activist, Peggy Seeger who has become one of the most powerful women in folk music.

International development and women’s rights activist and fellow writer Helen Pankhurst (great-granddaughter of suffragette leader, Emmeline Pankhurst) will also be appearing at the festival to speak about her book ‘Deeds Not Words: The Story of Women’s Rights – Then and Now’. And Steve Crossman, co-producer of recent podcast The Hurricane Tapes, will be on hand to reflect upon his investigations into the case of Rubin (Hurricane) Carter, the famous middleweight boxer who was convicted and reprieved twice of a 1966 triple murder at a bar in Paterson, New Jersey.

There is also a particularly strong comedy line-up at this year’s festival which will be curated by the Glee Club Birmingham and featuring Rob Auton, Andy Robinson and Bethany Black. And reflecting the sheer diversity and range of the event, staff and historical demonstrators from Black Country Living Museum will have a wide range of activities promoting heritage skills of the Black Country.

And as if all of this isn’t quite enough there will also be time and space for discussions about climate change, theatre, sculpture workshops, carving sessions, storytelling, yoga classes, singing and songwriting groups, and more top-notch food and drink than you can shake a festival stick at.