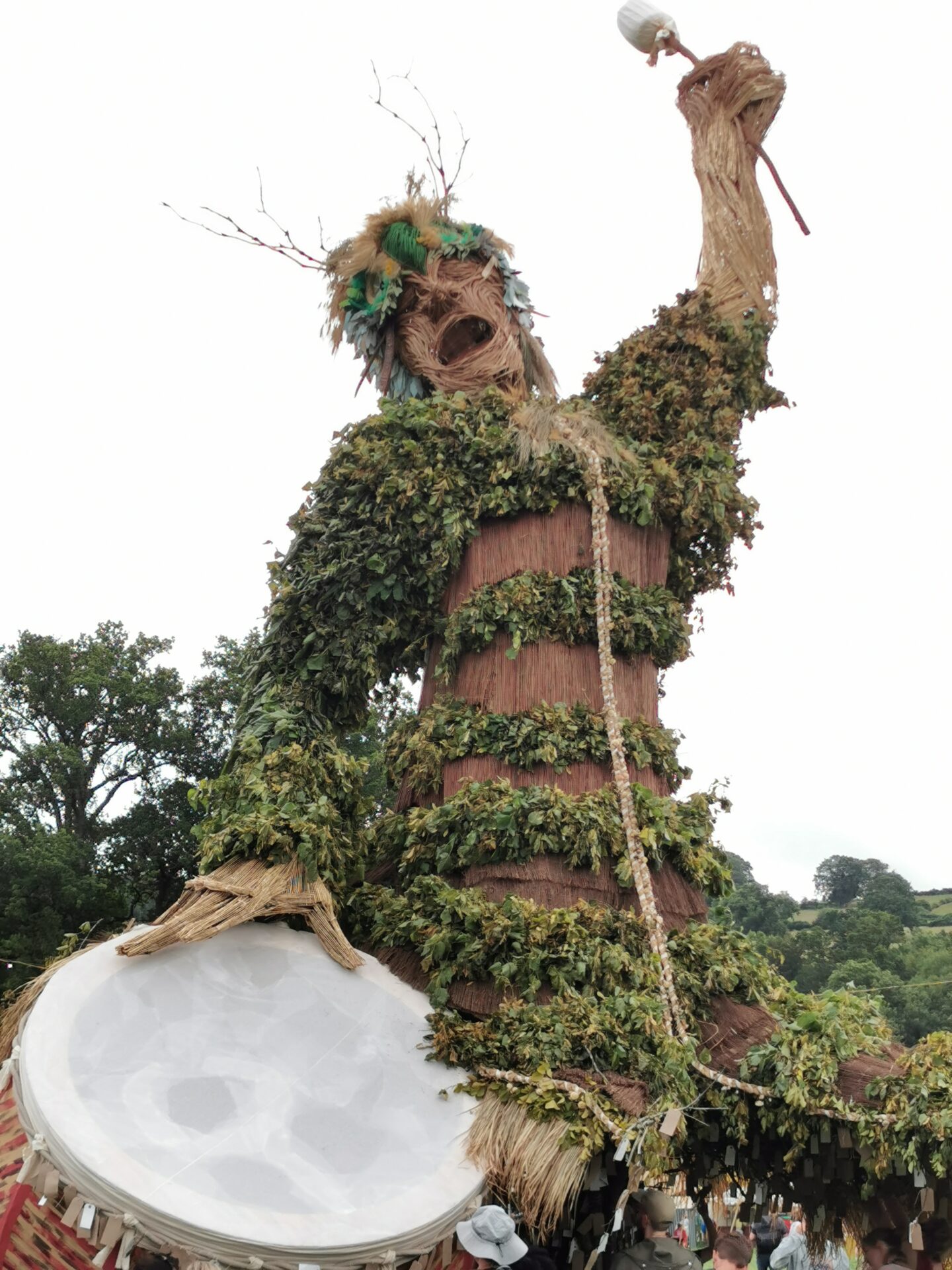 The floodlights bright beams of light are speckled with tiny drops of water, dancing to the music, bouncing with the vibrations of bass, harder assaults lash across them and create the effect of a TV screen, un-tuned and disconnected.

It is possible to become desensitised from your surroundings. Equally, when you’re stood in Wellington Boots in a couple of feet of mud, water dripping from your hood, you begin to fail to notice that it’s raining anymore, as much as you forget you’re in the beautiful valleys of the Black Mountains in the Brecon Beacons.

The weather is as changeable as the acts on stage, an abundance of styles and sounds, the rain smacking against your mackintosh, the wind billowing the flags and the crys of “it’s hot when the sun is out isn’t it”.

Post Punk to freeform Jazz to Soul to Punk to Folk Legends to American Alt-rock to Crooner and everything in-between, you’re never far away from something to titillate your ear ‘oles at Green Man.

The stages are set in the grounds of an estate, with partiality hidden walls covered by stages and stalls and a courtyard that connects to a “garden” enclosing a stage of its own, The “Walled Garden”.

The main stage, the Mountain Stage is, as you’d expect, backed by stunning mountain ranges, the Far Out stage is on its way out of the valley in the opposite direction, up the hill and in a tent, which proves very useful during Fridays downpours. Equally as useful is the Babbling Tongues tent that hosts talks and Q&As during the day and comedy in the evenings, to the night and onwards to the wee small hours.

But we’re getting ahead of ourselves…..

Thursday night is warm and barmy with the warm up acts for the full three days. NOV3L are post punk if Duran Duran, Spandau Ballet, Franz Ferdinand and Joy Division spawned a monster in the shape of this child.

Bodega are brash and brilliant Brooklynites with new material that promises much.

These New Puritans fail to ignite the evening, it’s minimalistic electronica and we need a livener.

Bess Atwell is pleasant out in the open in the clement climate and lulls you into a relaxed state ready for sleep to energise your limbs and head for all full days barrage of senses.

Mostly a barrage of water to faces, sodden clothes, muddy everything, splattered boots and flesh. With an accompaniment of fine Welsh ale, a cornucopia of food from around the globe and glorious music. Mostly.

When there are 4 platforms, four lists of bands and only one set of eyes and ears part of one body to get across all these stages, there will be casualties. The biggest will be the last slot of the weekend, but we’ll come back to that.

We start at the Mountain, metaphorically and literally, Jerry are brand new, fresh faced and suitably green, but boy do they have the clever tunes, tangents and angular sharp guitars. Ones to watch. 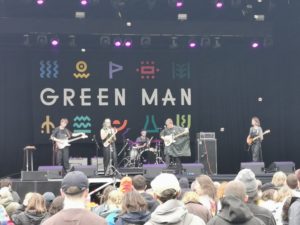 Penelope Isles are saccharine and nice on record, a passing resemblance to The Magic Numbers, but live they have a tendency to wig out and begin to start down the psych rock road.

The Beths were in Norway the morning of their set but hot footed it off the plane in London down the M4 minus a guitar. The Aussies happily blew the rain off in the Far Out tent like a hair dryer in a wind sock.

Julia Jacklin arrived on stage just as the worst of the precipitation hit, driving down the mountain behind and flying in our faces. Her new record is terrific and she deserved better conditions but she persevered and her exquisite voice banished any miserable thoughts to the back of your mind. 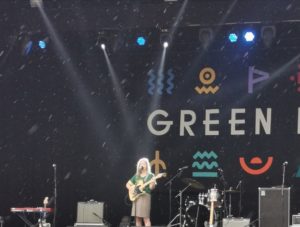 Marika Hackman was late and maybe a little distracted but fortunately her new album is jam packed full of filthy floor fillers and has the back catalogue to pull off (do not excuse the pun) a set of pop classic status.

Squid are bonkers, clever, tight and captivating, new single ‘The Cleaner’ is tossed off with aplomb and ‘Houseplants’ is frantic Prog, Post-Punk, and Jazz infused chaos. Finale ‘Pamphlets’ is aided by performance art from a dancer with sunflowers in all the right places. Utterly essential.

By this point the rain had invaded every nook and cranny of un-waterproofed clothing and it was beginning to get tiresome.

Refuge was sought in the Babbling Tongue Tent that had done its switch to Comedy. Mawaan Rizwan, Simon Lomas and Lloyd Langford unfortunately didn’t help the effort to remain dry as orifices leaked water profusely. All completely different in style and delivery but everything ached as we emerged into the night to catch the final acts.

Bill Ryder Jones is all dry Wirral wit and down tempo drone Alt-rock, he avails us of news that this is a first gig in a long time sober and as a result he seems to be enjoying himself. Latest LP Yawn has its best cuts aired and the poignant tribute to his brother ‘Daniel‘ is a highlight.

By then the rain has taken its toll and neither the mind nor the body was willing.

Saturday is dry and sunny so we head for a tent, naturally. You can never be too careful. The traditional Pop Quiz with legends Pete Paphides and Bob Stanley is about to kick off but it’s standing room only so we play for shits and giggles outside with beer.

The Green Man Records Pop Up Shop are holding intimate sessions and before we hot footed it over to Stella Donnelly, Jesca Hoop did a brief stint on the tiny stage ahead of her set in the Walled Garden that night. Stella was bubbly, strong and made you want to punch men in the face.

The Big Moon are on the verge of releasing their second LP and are road testing the new ones, including the infectious brand new single ‘Its Easy Then’. However you can’t escape the awesome power of their debut album for solid gold indie pop nuggets. There are few better good time perfect guitar pop bands going and The Big Moon are exceptional. For the ‘Cupid’ finale, they bring on the Secret Postman and women who not so surreptitiously go round the site dressed in Royal Mail uniforms. Just as they’re about to file off stage one of the postmen breaks rank and heads to the microphone. It turns out to be singer Juliette Jackson’s boyfriend with a delivery for her, and it is pretty obvious what is about to happen. It is a heartwarming moment as the couple who met 5 years ago on this very site get engaged in front of a whooping crowd.

Big Thief emerge with singer and guitarist Adrianne Lenker sporting a bright pink wig, a drawn on line moustache and tight top which seems to suggest a protest about the gender gap in festivals which is an obvious concern although not so much at Green Man. With a second album for 2019 due they debut new material including new single ‘Not’ that amplifies everything great about the Brooklynites.

Black Country, New Road had filled in on the Far Out stage when Kokoko had pulled out and then rushed back over to the Rising stage, crashing straight into ‘Sunglasses’. It’s jarring and jabbing and powerful and intense.

Dear Reader, I was ordered to watch Richard Thompson by my mother, so you do what you mother tells you, and his one man “folk’n’roll” is impressive. He acknowledges the 50th anniversary of his first band, Fairport Convention classic ‘Who Knows Where the Time Goes’ by dedicating it to the original singer Sandy Denny and there’s no getting away from it being a beautiful song.

Jesca Hoop is in all honesty a bit scary in a many faceted way. Her demeanour is like a headmistress, the kind that was both strict and loving and happened to have the voice of an angel. It makes every person in the Walked Garden go deathly silent, a quiet reverence falls over the crowd. Jesca is ethereal. All in white and picture perfect, there’s a Mary Poppins quality. She splits her set in two with the second half dedicated to her latest record, the stunning ‘Stonechild’. Magical. 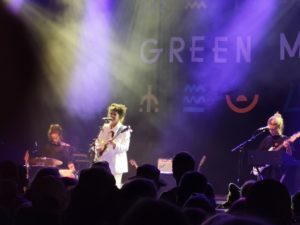 Car Seat Headrest had not long begun as we arrived at the tent to ‘Fill In the Blanks’ which was bulging at the seams. Will Toledo has come a long way from his bedroom albums on Bandcamp and him and his band make a righteous racket, a little bit early Weezer and everything that was great about American 90’s Alt-rock. Its quite a contrast to the peace and tranquillity of before in the Walled Garden.

Sunday arrived with its promise of a mixture of the weekends weather and sure enough it did all of the above. When it was sunny it was glorious, when it disappeared behind the cloud it felt like Dementors were about to appear over the peaks. And it rained a bit again.

As it was Sunday, a lie – in was deserved and the entertainment began as any Sunday should with brunch and a food discussion with Felicity Cloake and Matthew Fort comparing and debating the journeys around France and Italy and her islands for their respective books. All that was missing was a copy of the Guardian to twat wasps with.

Yak are a trio consisting of winners of my imaginary noughties indie favourites look- a-like competition with Johnny Borrell on guitar, Serge from Kasabian on bass and a young Jack White on drums with all the bad bits from each of those bands jumbled together to try and sound interesting, but failing.

Aldous Harding is mesmeric. She appears with no fan fare, stares at the crowd that suddenly falls under her spell and a hush descends. She utters not a word until she begins playing on her own for two songs before inviting her band on to launch into ‘Designer’. Her faces are all part of the performance, theatre that is at odds with the music but is as eccentric as the lyrics. The sun broke as she played solo and lit up the stage as if God was talking and she thought it was good. 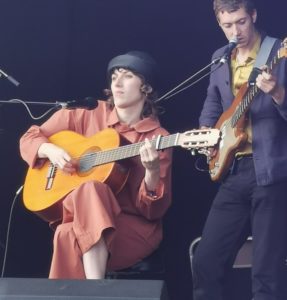 Eels brought the festival setlist as demonstrated by the covering of Prince’s ‘Raspberry Beret’ early doors before banging out the hits such as ‘Novocaine for the Soul’ and ‘Goddamn Right (It’s a Beautiful Day)’.

Father John Misty is the coolest mother fucker on the planet. He’s the lithe, snake hipped, lothario that may well be the worst husband in the world but my god he is the consummate showman. Now, whether Josh Tillman is really any of these things, apart from the hips, is another matter. On stage the Father is a raconteur of sexy tales, drunken and drug binge long weekends, self pitying pleading, and love songs that put the greats in the corner. 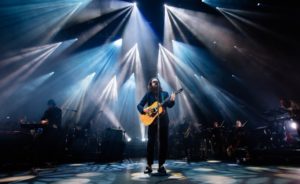 The opportunity to see the greatest frontman of the 21st Century (citation needed. *wink, wink*) was too good to miss, despite the purgatory of missing the incredible Idles. It ripped me apart dear reader, but the chance to see Misty headlining the main stage, the gravitational pull from his charisma and je ne c’est quoi was too much. I am in his thrall.

As with every year, the festival closes with the burning of the Green Man and firework display at midnight . As we walked up the hill with final pints in hand, the final strains of ‘Samaritans’ and ‘Rottweiler’ floated out of the Far Out tent and over the effigies head before he was lit.

Fairly soon it is but ash, and so is the weekend. But the memories remain. 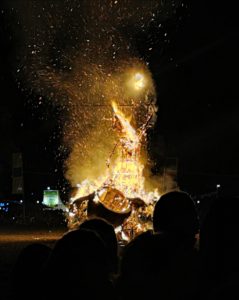