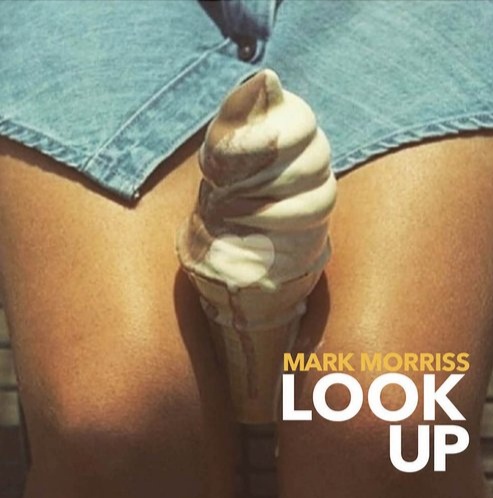 At what point does one become a veteran? To use a football example, it’s basically when you reach 30, or at least it used to be. If you’re a musician you can be regarded as washed up by 25 when every new upstart enters the fray, and yet you have The Rolling Stones or The Who, all getting on towards 80.

Should we taint Mark Morriss with such a brush? He’s not a septuagenarian but he’s been doing this a long time. “Slight Return” was first released in 1995 so we’re approaching a quarter of century next year since The Bluetones first put something out into the world.

Look Up first reared its head in 2017 when a CD was funded through Pledge Music on a limited run but since then Mark has found a home with Reckless, Yes Records who have given it the full works with single releases, video treatments and kaleidoscopic coloured vinyl.

Much of this record came off the back of a touch of writers block that Brexit broke down after the covers album in 2015. The likes of “Adventures” and “Rimini” are directly influenced by the immediate aftermath of the referendum and the fall out.

Strip away the uptempo and jaunty surface and the lyrics are either self deprecating or a damning indictment on the state of society and the country as a whole. With a bit about a “blond hippopotamus” that shouldn’t need explanation.

“Adventures” is reminiscent of Elton John’s “Funeral For A Friend” with elongated intro and high pitched early 70’s Elton vocals.

“Roll Away” is a cover that arrived late in proceedings and is the most gentle and gentile cut on the record. A live standard for a while that suits his stripped back one man and an acoustic guitar normal set up well.

“All The Wrong People” was the lead single and is a stand out track. Liquid wah wah guitar that has the Stevie Wonder “Higher Ground” funk coupled with a barnstorming chorus.

He may not appreciate the metaphor but there is something about his voice that is incredibly comforting, like an old pair of slippers. It’s been ever present for nearly 25 years now and it’s unmistakable and unique.

There are no histrionics, no sliding scales or high notes but an effective range with the right level of emotion and nuance. As we drift evermore away from the Britpop era and the bands and singers become the age that their heroes were and the sands of time plays it’s terrible tricks to our fragile bodies, some people seem to have been touched by the hands of youth and their features have barely changed. Morriss and in fact the whole of The Bluetones do not seem to have gained a day. The voice is exactly the same, not ravaged by excess and over use.

“Holiday of a Lifetime” seems to be using the same backing band as Barry Manilow used for “Copacabana” but again the lyrics have an undertone of resignation at the times we live in, more than your average desire to escape the real world for a week or two but wishing you never return.

“The Beans” is infectious with a fast moving tune that leaves the subject matter at a more personal level, describing the end of a bad relationship that you’ve revisited too many times. The Beans would suggest a mood lightener but the subject matter is still dark.

Fortunately the record isn’t heavy in mood because the songwriting is as influenced by Buffalo Springfield and 60’s jangle pop of The Byrds as ever, “But, Still” and “Mother Moon” are textbook Morriss.

If the rumours of a new Bluetones LP are true then the song-smiths mind is sharp and in fine fettle. Further down the track of this great debacle must mean the bank is overflowing with wit and cunning lyric. What a tonic he is in this blue time.