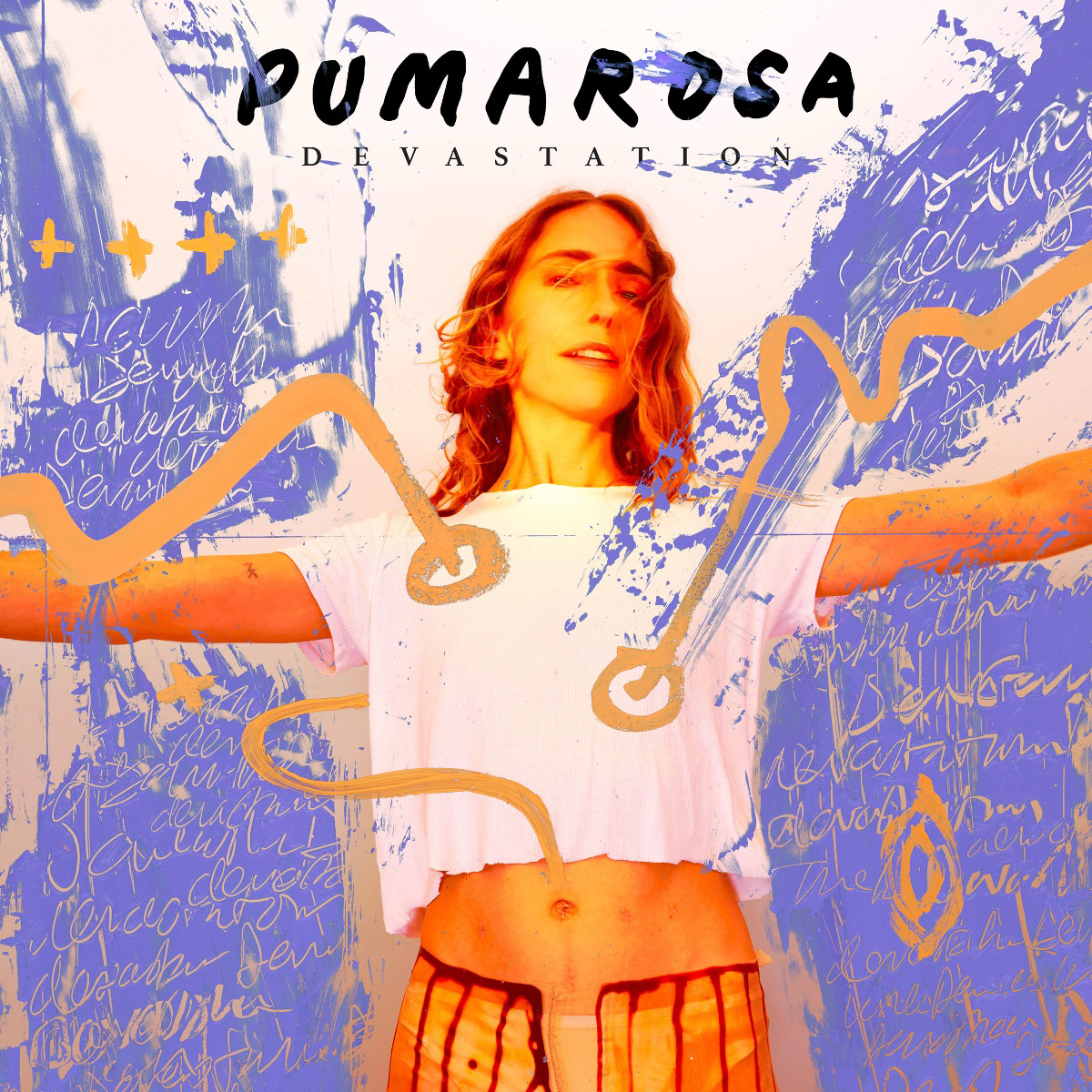 “When a crisis happens, your needs emerge. You can’t just keep going,” said Isabel Muñoz-Newsome in a interview with Dork magazine. The lead vocalist of London-based psychedelic-indie group Pumarosa has experienced and recovered from cervical cancer in the last two years and the way her perspective of the world and relationships has distorted during this time is reflected in Pumarosa’s second LP, the enthralling and daring Devastation. The follow up to 2017’s spiritual and hypnotic The Witch, sees Pumarosa continue to excel at creating intense and highly creative music with intriguing layers of sound and Isabel’s alluring and psychedelic voice – a cross between Portishead’s Beth Gibbons and Karin Dreijer – guiding us through their world.

Devastation begins at great urgency with the speedy drum ‘n’ bass track ‘Fall Apart’. As a lot of the record is preoccupied with the dissembling of society’s structure (from gender, to sexuality, to relationships)  and how to view this change, a reaction to Isabel’s illness, it’s a good introduction to the record. “When will we learn. To fall apart? When will we try. To change the light? When will we learn. To fall apart? ‘Cause in pieces you are what you need to be.” As the composition grows chaotic with haphazard lasers flying around, Isabel is urging us to embrace chaos as a method to renew and refresh our lives. When she pleads “please don’t be perfect anymore,” it’s reminiscent of the daredevil messages inside Fever Ray’s album Plunge, in which she banned boring behaviour.

This relinquish of control is also highlighted in ‘Lose Control’ – by Pumarosa standards the most accessible track on an otherwise unorthodox album. Isabel Muñoz-Newsome had her cervix removed to eliminate the cancer in her body and this track in a way describes the disorientation that having one less body part can bring. As consequence it affect the co-ordination of the mind: “Who made these rules? Who cut these keys? Well, they don’t fit me. ‘Cause my head’s on backwards. And I’m trying to get free”.

“Make it known, the tower is turning. Yeah, yeah, I got a voice. Made the choice, the city is crumblin,” is Isabel predicting another collapse of normality. However on this synth track ‘I See You’ it’s connected to the #metoo movement track. Speaking from her experience and her friends’ experiences, it’s is a direct conversation towards a belittling male: “Used to lower my eyes. Hopin’ that might make me invisible. But now I level my gaze. ‘Cause what have I got to be ashamed of?”

The production on Devastation occasionally nods to both 1990’s electronica (hear ‘Heaven’, which sounds like Bronksi Beat’s ‘Smalltown Boy’ mixed by William Orbit) and David Bowie’s Blackstar. The latter because they use squeaking saxophone sneakily luring behind queasy free-jazz arrangements, a hallucinogenic atmosphere and rapid sticky percussion. Examples include ‘Factory’ – this is Pumarosa  at their most suffocating and surreal with a spinning propeller sound contributing to the disorientating feeling. In turn it questions the ingenuity of the abductor-hostage narrative of the song.

The enticing ‘Adam’s Song’ is a voyeuristic dedication to Isabel’s drag artist friend Adam Christiansen and the sexual magnetism that surrounds his aura when he performs on stage. The sexual lyrics such as: “I’m gonna need some pretty high heels if I’m gonna stand by you. And it feels too much. To stand by, not to touch.” really warrant a seductive music video. The astounding eight minute track ‘Lost In Her’ continues the boundless erotica, as the bisexual Isabel Muñoz-Newsome attempts to describe the extreme emotional and physical details of a sexual encounter with a female lover: “Our bodies blur. In our melting poison. Capillaries open. Shutter speed flutters Reality stutters. Into overdrive.” By the time, she sings ‘I could f**k you in a coffin. Or on a table” on the final title track, the Kate Bush-esque ballad ‘Devastation’, the words are less surprising because of the brave lyrics that precede.

Isabel Muñoz-Newsome’s health crisis has made her grow as a person by allowing the Pumarosa vocalist to ignore her anxious side and embrace change, chaos and unpredictably, and this is evident in both her band’s ambitious and diverse compositions as well as her fearless lyrics. “Just do what you want to”, she sings on the final track and you will be hypnotized to follow her empowering orders.