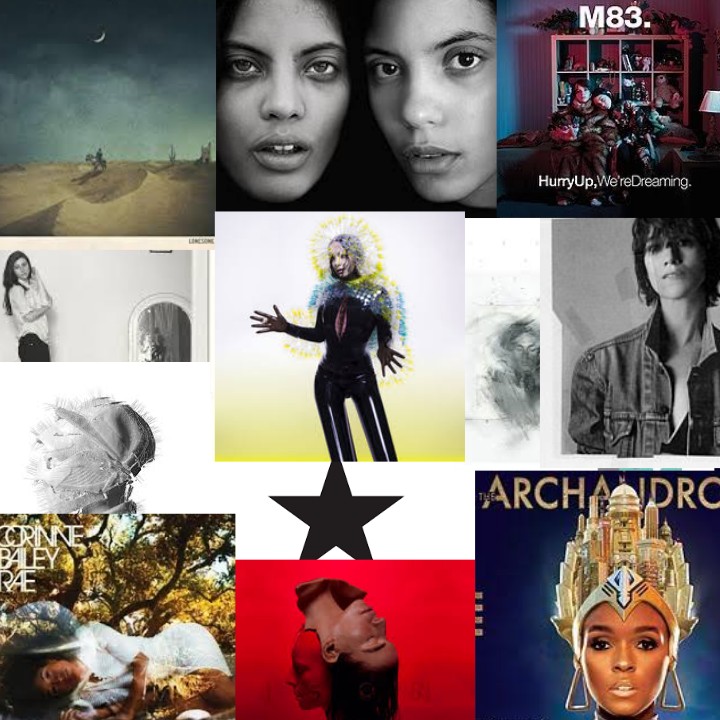 Although this Danish act will always be most known for ‘Hollow Talk’ – which cemented itself in Scandinavian pop culture by becoming the theme music to police series The Bridge – Grasque is more of a solo project with Jannis Noya Makrigiannis taking The Choir of Young Believers to a new direction by himself. You may be able to tell that Jannis has a Greek sounding name due to his ancestors and on this meditative and soothing album he takes us to a Greek paradise by way of the instruments used (from pan flute to lyre), the sounds of waves and the heavenly aura – a mix of world music and 1990’s Sade-esque quiet storm. The inclusion of Danish and English lyrics add yet another multicultural personality to proceedings.

It’s impossible to dislike this Leeds singer’s voice. It’s smooth, comforting, intellectual and cute all at the same time. But set this voice with lyrics that displays her mourning at losing her husband Jason Rae to an a drug-alcohol overdose and a powerful soul production and you get an album with a heartwarming depth that’s hard to match. The water metaphors that reoccur allow listeners to reinterpret the lyrics: “The sea doesn’t just exists. Grays everything, crushes everything. Cleans everything, takes everything from me.”

There are many reasons why this album was significant and important to this decade. Firstly the timing of it’s release was initially eerie – Bowie dying just 2 days after it’s release, which was also coincidentally 2 days after his birthday – and then to find out that the musician already knew he was dying and made the album as a “parting gift” to his fans, gave the lyrics a deeper meaning. Aside from that Blackstar is a brilliantly ambitious and experimentally record, typically for Bowie in that context, with it’s mix of free-jazz, dark context and wayward art rock becoming a stylistic reference point for newer records that copy that style. Thirdly, it renewed a booming interest in Bowie’s importance to music for new generations and that really is a powerful statement.

Before she became a household name, Claire Boucher’s music felt like it belonged to its own cult and knowing it’s existence made one feel like a special VIP member. Visions was the peak of this. It’s a hallucinogenic experience and occasionally indescribable in genre terms. It’s an album that breaks its own rules or structures at will. It beautifully contrasts underworld and jagged electronica with Boucher’s squeaky supposedly innocence vocals. It’s easy to feel like a wandering spirit lost in the album’s atmosphere. Grimes recorded the album in 9 consecutive days without eating or sleeping and this weird methodology is likely to have contributed to the disorienting yet fascinating feeling that the music brings.

Shrouded in mystery, the identity of iamamiwhoami could have been anyone at the beginning. Cryptic clues were left in enigmatic videos and song titles that sounded like password codes or types of Star Wars robots. It was later revealed to be an audiovisual project of still relatively unknown Sweden’s Jonna Lee, originally from a folk-pop scene. Music promos were released for every track on debut Kin, which made each track feel equally important if equally diverse on an album that showcased such an experimental and unpredictable pop sound.

French-Cuban twin sisters Lisa-Kaïndé and Naomi Diaz (Ibeyi translates as “twins”) are the kind of daughters that every parent wishes they had. Intelligent, sensible, talented and with a devotion to family values. This is displayed in one of the best debut and precocious albums of the decade. An album in which the twins mourn over the death of their father (also discussing about the afterlife in the context of their Yoruba heritage) and show empathy for their understandably distressed mother. Musically it benefits from its minimalism; the intertwining harmonies of Ibeyi, a few layers of organic rhythm of claps, clicks and drums, light piano and multilingual lyrics (from French to Spanish to English to the slave adopted Yoruba). It’s a style of R&B that have uniquely invented.

Such an epic structure and detailed concept. It has an immediate impact, captivating listeners from its first overture to it’s final track ‘BaBopByeYa’ – an intense, cinematic, classical, world-travelling and magical wonder. Her energetic and quirky personality displayed in music videos added to the excitement when the record was released. Never has listening to a record imagined such an decade-crossing and genre-hopping opera – somewhere between The Wizard of Oz and Charlie and Chocolate Factory at times, yet it also feels strangely modern too. Influenced by Prince, Outkast, Steve Wonder, big band jazz, funk-rock and old film scores, it’s a blended fantasia of the best music, boosted in quality by an intriguing story about a time-travelling android called Cyndi Mayweather, whom is sent from the future to save the residents of Metropolis from emotional oppression. The character also symbolized the idea of a saviour connecting the minority with the majority. There are hundreds of reasons to love this album.

There’s always been something so sophisticated, erudite, idiosyncratic and art-school about Julia Holter’s music – the kind of artist that would be suitable for an audience at the Royal Festival Hall in London. On this album, there’s also a great deal of warm, making it both creative and accessible. This comes from the orchestral folk arrangements and the fact that this was the first time that Holter really pushed her vocals to the forefront. It’s enjoyable for its invented characters, as well as it’s shape-shifting compositions and moments of enigmatic intensity.

On the album sleeve, you can see a man in a desert riding an animal in the distance as the moon hovers above his head. It’s apt cover as the songs within – due to the harmonies and journey-travelling style of folk – imagine a man that’s lost in a lonely place in a never-ending search for his identity and purpose. In fact most of Lord Huron’s catalogue is like that but with great storytelling, and in this case they were inspired by American Old West tales, specifically poems about Billy The Kid. Lonesome Dreams is a great introduction to the Los Angeles-based band that really use that Americana/country folk sound in the most effective way – to convey that an unknown adventure awaits, and that determination is the key to success.

A few key words always spring to mind when thinking about M83’s approach to music: memory, childhood, nostalgia and escapism. Hurry Up, We’re Dreaming was project founder Anthony Gonzalez’s way of remembering his youth and it’s displayed in an album that showcases his skill at making intense nocturnal cinematic layers. A child’s narration about a frog, as well as the use of a children’s choir, instrumental ambient bliss and grandiose 80’s inspired synth-pop paints Gonzalez’s childhood as being a peaceful, exciting, adventurous and curious time. M83 have an enthusiasm which quickly rubs off on the listener and is perhaps why their most famous single ‘Midnight City’ was used so frequently in advertisements.

Good things come to those who wait, as they say, and devoted followers of Canadian lounge-indie-funk Men I Trust had to wait twice for them to release their first album as a trio. The first wait was 3 years long as the Montreal musicians released consistently amazing singles that just kept wetting the appetite for the LP – from Zero 7-esque ‘Tailwhip’ to the nocturnal forlorn of ‘Numb’. However, the album’s release date was moved again for another 7 months due to touring and perfectionism. It was worth the wait as the real accomplish of Oncle Jazz is that not only does it satisfyingly embrace their signature sound over the course of 24 tracks– Emma Proulx’s soft wafer thin vocals, non-pretentious lyrics over jangly guitars and slap bass – it also adds lots of surprises into the mix to prevent it from being repetitious, from 80’s TV show instrumental interludes and exotic torch songs. It only adds to their already irresistibly likable charm.

Alluring, seductive, mysterious and otherworldly. ISON (named after a star) draws you in to its exotic-trip-hop from the beginning and refuses to let you go over it’s 17-track length. Although she has spent most of her life in the Netherlands, Sevda Alizadeh was born in Iran, and the album has a middle-eastern undertone to it’s stuttering alternative R&B sound, right from the beginning with the opening track ‘Shahmaran’-  the name for a mythical creature, half woman and half snake found in Iranian folkore. One of the most praiseworthy elements is definitely it’s production: a haunting, disjointed, broken, malfunctioning structure, as if it’s flawed on purpose to showcase the imperfection of humans.

Admittedly, Woodkid’s music has been overplayed in adverts and drama trailers, but in a positive way this likely due to the impact of his compositions. A voice and an orchestra that although are grand and overwhelming, especially when accompanied by occasional tribal drumming and church bells and expensive looking black & white music videos, they display a shivering vulnerability that reflects the composer Yoann Lemoine’s tribute to his childhood. The record’s dramatic cohesive style make it spine-tingling and hard to forget.