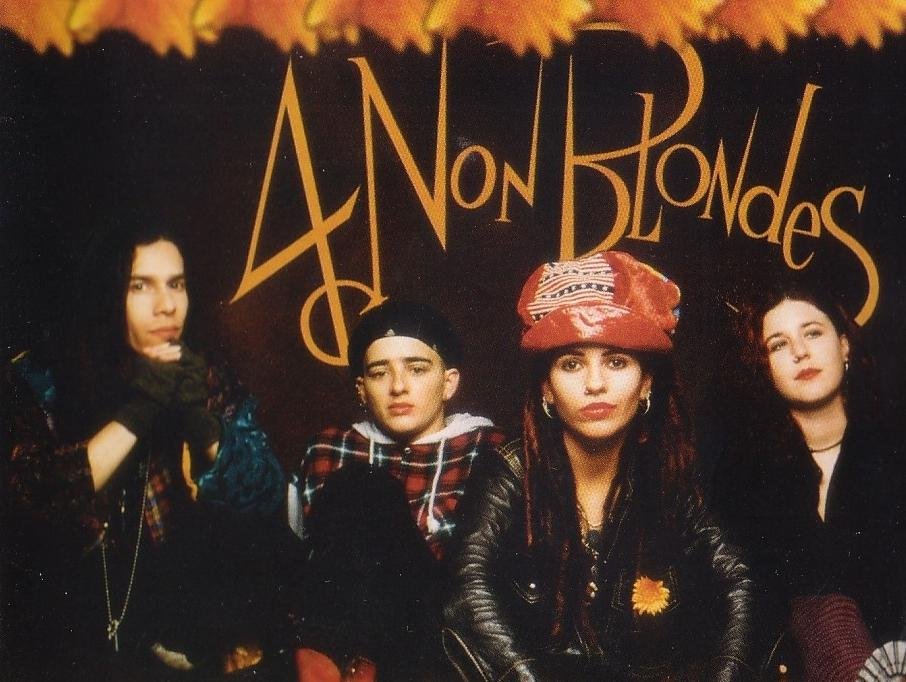 The archetypal one hit wonders, 4 Non Blondes are the band behind the latest Pop Classic track, partly for the presence of vocalist/guitarist and songwriter/producer Linda Perry, who achieved much more in a stellar writing and production career after the band broke up.

4 Non Blondes was formed in San Francisco in 1989 by Perry and bassist Christa Hillhouse, guitarist Shaunna Hall, and drummer Wanda Day, although just prior to the release of their first album, Hall was replaced by Roger Rocha on guitar while Dawn Richardson replaced Day on drums. They only recorded one album, ‘Bigger, Better, Faster, More!’ (1992) as they broke up during the recording of the second, in 1994, which was never titled or released.

The album did well, going platinum in the U.S. and making #1 in the charts in six countries (#4 in the UK). In total they released seven singles but after ‘What’s Up?’ (1993) the highest chart position for any of them was #18 for ‘Spaceman’, in Sweden. In contrast, ‘What’s Up?’ was #1 in seven countries (#2 in the UK) and was particularly popular in Brazil (Linda Perry’s mother is Brazilian, her father Portuguese).

It is an outwardly political female emancipation song, from a band led by an overtly LGBT writer (or who would be called one now) – Linda Perry, to whom the song is credited solely. (In fact she wrote or co-wrote all but one of the album’s 11 songs). It was the first Top 40 hit by an openly lesbian group.

While political dissatisfaction and a call for revolution are often read into the lyrics (and the title was chosen to differentiate it from Marvin Gaye’s classic 1971 track ‘What’s going on?’ – words which remain in the lyrics -) there is no evidence that Perry was trying to replicate Gaye’s angst. Gaye’s song has a story to it as well of course; it was one of the first Motown songs which attempted to make a political statement, and which came from an album which was notable for (again, possibly the first time) tackling subjects such as the environment and poverty.

Indeed, Hillhouse recounts how she lived with Perry in a small flat in San Francisco and how Perry would just sit down and start singing what she was feeling, without any method. Perry was more concerned that the song came so easily to her that she must have heard it somewhere and was plagiarising another musician.

Hillhouse said. “I was having sex and stopped when I heard it, ran down the hallway and said, “Dude, what you are playing? I like that.” She adds, “I knew right when we played it, the song made the whole room feel this thing. It’s a connection to humanity. Certain simple songs, that’s what they do. There’s an honesty there that breaks through that people can relate to. Then of course they played the song to death and a lot of people are really sick of it.”

“25 years and my life is still

Trying to get up that great big hill of hope

I realised quickly when I knew I should

That the world was made up of this brotherhood, of man

For whatever that means…

I try all the time

And I pray, oh my god do I pray

I pray every single day

Perry left the band in 1994 to begin a solo career, and the remaining members disbanded shortly thereafter.

And that is really where her story begins as she went on to become a Grammy nominated singer-songwriter and producer with two record companies of her own. Along the way she has, inter alia, written for, or co-written with, Gwen Stefani, P!nk, Adele, Alicia Keys, Courtney Love, K T Tunstall, Britney Spears, Faith Hill, Celine Dion, Sugababes, Robbie Williams, and even Enrique Iglesias as well as signing and distributing James Blunt in the U.S. Well, nobody’s perfect I suppose.

But in any case, such indiscretions as James Blunt are forgiven simply because Perry was responsible for writing and producing Christina Aguilera’s ‘Beautiful’ (another anthem adopted by the LGBT community).

Perry was inducted into the Songwriters Hall of Fame in 2015. She’s dabbled with solo albums of her own (often closing her shows with ‘Beautiful’ as if it might be an entrée back into the musical swirl) and produced a film. She’s still working. But ultimately, unless she comes up with another blockbuster, she will be remembered mainly for ‘What’s Up’? (Though she should be for ‘Beautiful’, of course, but she hardly gets any credit).

And it’s fair to say she will be remembered mainly positively but also negatively by some for the song, which, as Christa Hillhouse hinted at above, has divided opinion, possibly because of over-exposure.

At the Reeperbahn Festival in Hamburg in 2018 Linda Perry was a judge for the Anchor Awards. At the end of the show she performed in a way which wrong-footed everyone, and together with fellow judges Skye Edwards of Morcheeba and Cassandra Steen of Glashaus, and the Kaiser Quartett, a new version of ‘What’s Up’? She wrote it 30 minutes before the performance with no rehearsal, as she slowed it right down and actually added new string parts. They literally played it by ear. It was astonishing to watch and hear, it’s something I’ll never forget, and if this isn’t talent at its highest level I don’t know what is.