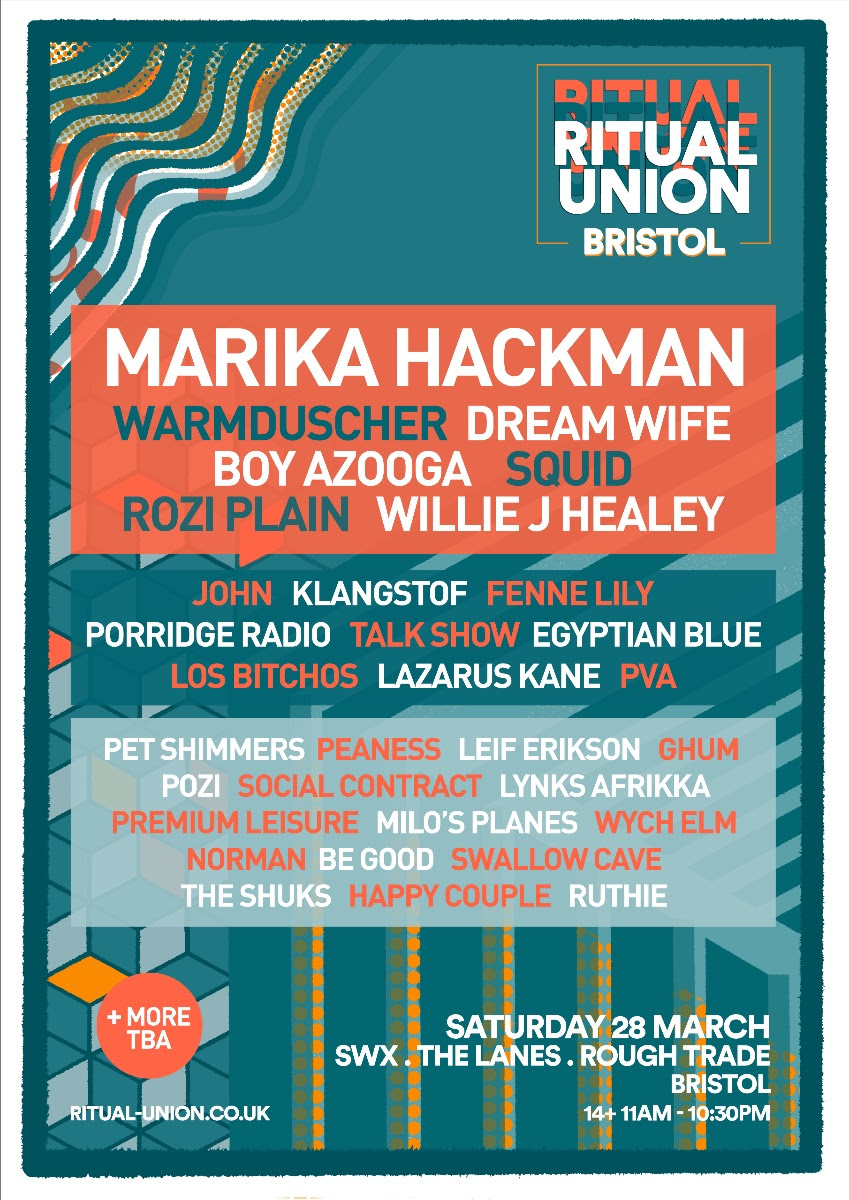 1% of One & Crosstown Concerts have announced the next wave of artists for Ritual Union festival taking place in Bristol on Saturday the 28th of March.

Leading the new batch of artists are Dream Wife, who released their debut self-titled album back in 2018. Joining them are London-based post-punk outfit Warmduscher (who are comprised of members of Fat White Family, Paranoid London and Childhood), Bristol’s very own Fenne Lily and Lazarus Kane as well as Brighton quartet Egyptian Blue.

Continuing on the Ritual Union theme of promoting the local talent, today’s line-up announcement includes the like of Norman, Milo’s Planes, Swallow Cave and The Shuks in addition to fresh UK talent in the form of Los Bitchos, PVA, Ghum, Ruthie and Pozi.

Having launched Ritual Union Bristol 2020 last year, the response has been unprecedented with super early bird tickets selling out almost instantly, replicating the success of their Oxford based sister festival.

Lazarus Kane said, “If there are two things Mr Kane truly loves in this world, they are rituals and unionization. Expect big things for this performance. Rumours are already flowing that his performance will include a pagan performance from the association of lighthouse keepers (ALK). Get your ticket now to find out.”

With the acts playing across an array of venues across Bristol’s Nelson Street, the festival say they offer “music fans the chance to enjoy some of the best live acts the country has to offer, and find their new favourite band, in one of the UK’s most musical cities which have bred some of Britian’s biggest new acts in the form of bands such as Idles and most legendary in the form of Massive Attack and Portishead.”

Richard Walsh, 1% of One said, “We’re thrilled to roll even more incredible artists into Ritual Union Bristol! With creativity within the city seeming to be at an all-time-high, it’s a pleasure to bring diverse, local acts that are making waves across the country back home; Rozi Plain, John, Fenne Lily, Lazarus Kane and Lynks Afrikka to name but a few.”

London-based festivalgoers can get a taste of the event at The Lexington this Wednesday night as Ritual Union presents Best of Bristol 2020 featuring Katy J Pearson. Katy will be joined by Lynks Afrikka, Wych Elm and Swallow Cave 1who will be performing at the festival in Bristol on 28th March. Tickets are priced at £6 and can be bought from See Tickets.

SUPER EARLY BIRD + EARLY BIRD TICKETS ARE NOW SOLD OUT.
Tier 1 tickets can be found at on the website below priced at £30.