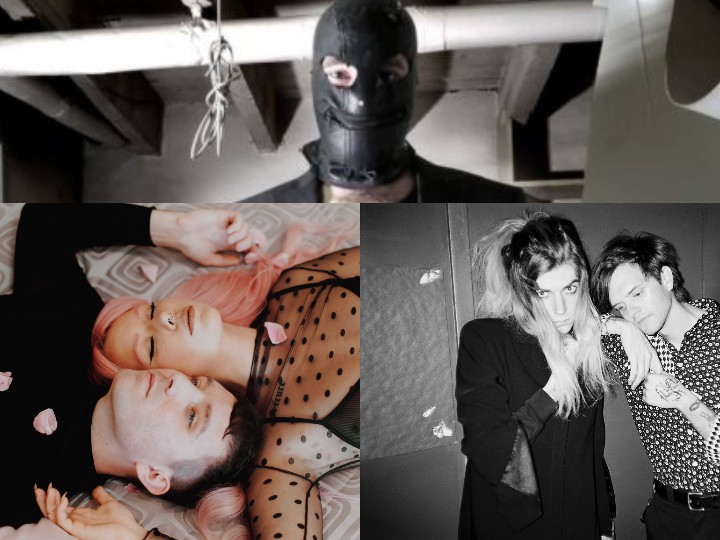 In a little over two years, Korine, the duo of Trey Frye (keyboards and programming) and Morgy Ramone (vocals), have set their hometown of Philadelphia on fire. Careful not to overstay their welcome, they try to gig more outside the city than in their back yard. When they do play a local show, you better believe they help pack the house. Their sound is a non-apologetic 80’s synthwave with modern darkwave sensibilities and lyrics that are more Sex Pistols than Duran Duran. The pair self-released their 2017 debut E.P., Corsage, as a photo ‘zine with a download code initially. Reactions were overwhelmingly positive. Following this on Valentine’s Day 2018, they released a cover of Crystal Castles classic, “Not In Love” (feat. Robert Smith of the Cure on vocals) as a digital single. Not only did they nail it on the head, Morgy doesn’t try to sound like Smith, so they made it their own.

Korine signed to local Philly record label, Born Losers, in order to release their first full-length album, New Arrangements. Landing in stores on Halloween, three of the five tracks from the initial E.P. feature as well as five new compositions. Immediately upon queuing up the first track, “Captive” and pressing ‘Play‘, you are drawn into their world. If no one told you this was a 21st Century release, I’m sure a bet would be lost. The initial keyboard sequence alone will make you a fan until you hear the first several of the chorus intoned, “You want to take drugs, Of course you do, You want that fake love, yeah, I want it too, I’m still the same thug, I want to capture you in hate”, then you become obsessed. Seeing them live when this song is performed is quite a frenzy on the floor.

They have done several rigorous tours throughout the United States, performing with artists like Black Marble, Timecop1983 and Wingtips. Korine have also played several festivals such as Absolution Fest and SXSW. Their latest is a double A sided single, “Uncrossed / To You” which was released to great acclaim in October of last year. Respect is building as is the fan base. The band had well over 220,000 streams on Spotify in 2019. They have whispered that a new album is in the works for late 2020. Keep shouting and maybe you will coax them to cross the Atlantic.

Carl Kavorkian a.k.a. Manikineter is not a household name…yet. He had been releasing music under his own name since the early 2000’s. His unique blend of noise, hip-hop, metal, electronica and industrial made it hard to pigeonhole him. Then again, one of the marks of a true artist is to keep people guessing and that is exactly what he does. Skillfully shifting his sound for each release, you can find much of his work on Bandcamp at ‘Name Your Own Price’ prices, which makes it a joy to dig in and discover all the nuances that he has to offer. Shortly before donning his new moniker, Kavorkian released what is in many ways the ultimate combination of his sound to date in late 2016 as the two CD / two on one cassette release entitled SerpePhant EleNtine. The release gave him some visibility and well earned praise. He was touring frequently (even internationally) and collaborating with the likes of MF Doom and Kool Keith. He was still eager to push himself further.

Manikineter evolved from those early experiments and is now blazing a path through the Philadelphia underground like no one else. Starting with his debut E.P. Mannequin Eater in early 2017, he began to hone a sound unlike any artist in Philly. Relying mostly on drums and dense basslines, the beats are brutal and the vocals scream like a tortured man in ecstasy. Later in the same year his second release Missing appeared. Far more in your face and musically diverse, you can tell he is gaining confidence. Lyrically he is still a street prophet. From the albums lead cut, Cheekturner, he warns, “The artful dodger paints his picture, Mesmerize ya with a tainted scripture, Now forgive the herd that has lost its sleep, Can’t forget the urge when mouths froth for meat”. 2018 was his third E.P. Not As They Do, oozing blacker into the noise / industrial rap pool. To call the album his darkest would be an understatement. Take a glimpse at this verse from the song, “Rockatansky Memoirs (The Big Nothing)”, “What is this that remains around me? The rubble of yesterday’s future, Over grown with destruction, For as far as the eye can see”. He has carved his niche and the world needs to see it.

2019 saw him release a string of singles. January saw a split release on U.K. label Link2Wales with kindred spirit Teeth Crack. Then another split single in June with hometown Doom Metal band God Root was released on cassette. His track, “We Don’t Remember Asking” is an almost ten-minute assault on the ear drums that’ll make them beg for more. Rounding out the year with is finest track to date, the download only track, “How Many Licks”, which is a sweet ode to the bootlickers out there. Manikineter has already set 2020 off with a bang, releasing a bombastic new song, “Sizzlean” on Spotify and Apple Music. The BDSM masked man is ready to break out onto the world stage and he’s bringing the noise with him. He was recently in the spotlight as one of the artists in Bandcamp’s feature article for ‘The Best Noise Rap‘ on their site, which is no small feat.

Relative newcomers to the Dream Pop scene are Philadelphia’s Arch of Love. The duo of Chelsea Brennan (Vocals and keyboards) and Chris Schackerman (guitar/drum programming/vocals) meld a brand of music more akin to Everything But the Girl than Beach House. Theirs is a alchemical recipe that is refreshing in the new breed of Retro-style artists. You feel the chemistry between the two and what each of them bring to the project. They have only been together as a unit for a little over a year. From 2017 – 2018, Chris was the touring drummer for the band The Pains of Being Pure at Heart. In between shows he and Chelsea had already begun writing some songs as Arch of Love. An injury to his wrist caused him to quit the drums but allowed him to spend more time focusing on his band.

The band are signed to Richmond, Virginia label, 6131 Records. They released four dynamic singles in 2019 for their label. “Night Walk” was released in May of last year as their debut. Chris’ guitar shimmers with beautiful interlacing keyboards from Chelsea and a saxophone solo that gives it a ‘Gentlemen Take Polaroids’-era Japan vibe. Second single, “Say”, reminds one of Isabelle Antena’s immortal hit, “Seaside Weekend” in it’s whimsy and carefree rhythm. The track lyrically tells of a heartbreaking relationships ending.  “Reintroduction” is the most keyboard-centric of their songs so far but the guitar is never fully out of focus. Chelsea’s brief lyrics of hope are beautiful and angelically sung. December saw their latest single and video, “Light in Your Eyes“. One listen will leave you wanting more and playing it over and over again.

The New Year will see their debut full length album, as yet untitled, hit the shelves. According to Chris, the writing and demoing process is well underway. Expect to see them on the road more as well. They have been across most of the Eastern Seaboard of the USA, but they are looking to expand their reach playing in new cities like Chicago and Detroit as well as further South to cities in Georgia and Florida. It will be great to see them expanding their audience by not only playing more shows but also festival shows like ‘The House of Vans’ event in October 2019 in Philadelphia. They played with Twin Tribes, Choir Boy and Hibou last year, so it will be exciting to see who they will join up with in the future. It’s only a matter of time before we will be writing of another up-and-coming band saying that they have played with Arch of Love and knowing that there is a collective gasp of, “No way!”. I’m sure of it.