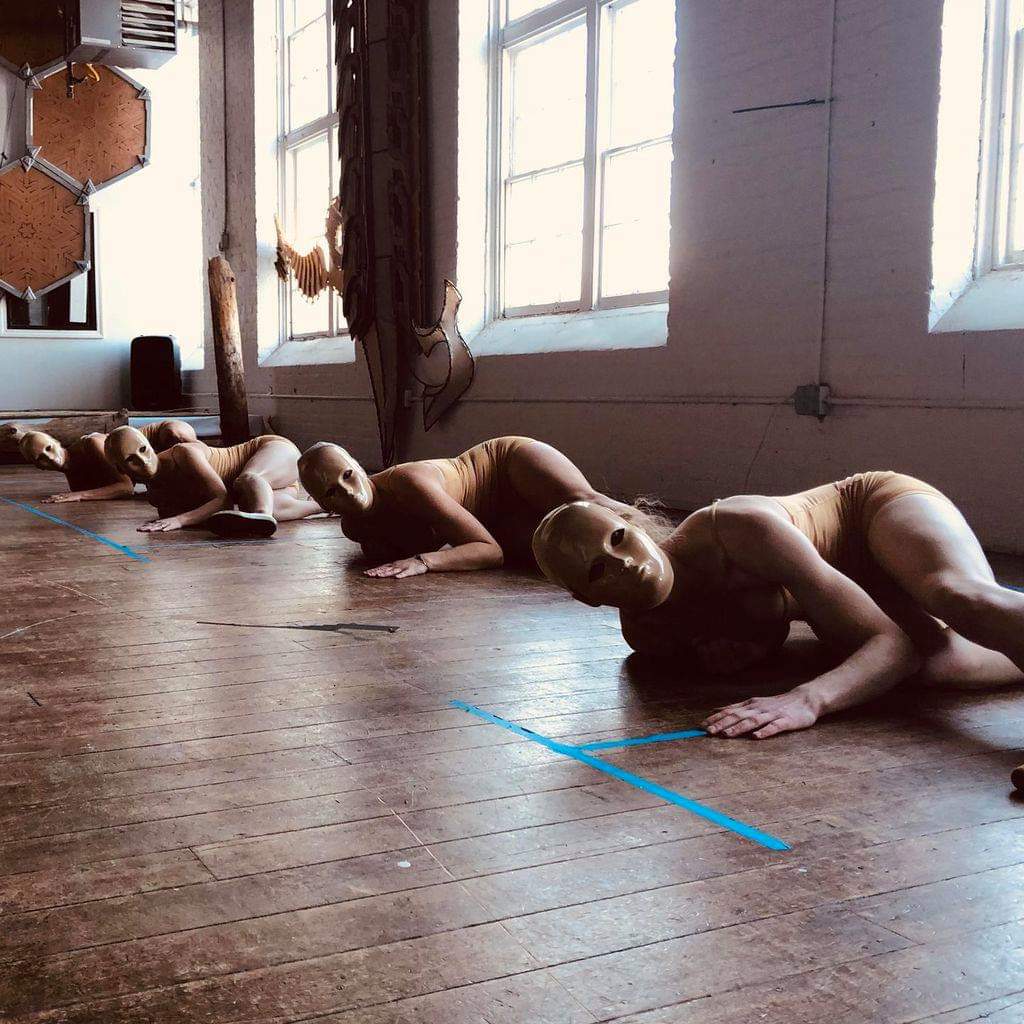 ‘Future-pop’ trio Arc Iris has premiered (25th January) its sci-fi ballet ‘iTMRW’ (I Tomorrow) at Oberon, a stage of the American Repertory Theatre in Cambridge Massachusetts, across the Charles River from Boston, USA. The band is based in Providence, Rhode Island, home to its main mover and shaker, Jocie Adams. The other two band members are Zach Tenorio Miller (keys) and Ray Belli (drums).

‘iTMRW’ is their most ambitious project to date though, a 75-minute theatre piece set to a live performance of the band’s forthcoming futuristic concept album of the same name. Set in the year 2080, it tells the love story between a man and a robot, unfolding against the backdrop of a world where advanced technology is both a source of, and a cure, for human alienation and in which a huge conglomerate provides citizens with every product they’ll ever need, including, for men, the “companion bot” of their dreams.

The premiere runs through January 25th and 26th.

It’s a large scale project with a large scale budget, of US$23,300. It’s a crowd-funded undertaking too, Arc Iris having embarked on a campaign to bring the adventurous piece to life which reached its financial target on 17th January. Having gone through some hard times in the last few years with band members leaving (there were once eight of them) and unaccountably losing their recording deal at Bella Union, they have become quite adept at crowd-funding and are signed up with Patreon.

GIITTV hasn’t seen the show but the Boston Globe commented on the final rehearsal. Correspondent James Sullivan describes “mechanical dancers wearing unsettling blank face masks… the disembodied narration of the android Jenny (actually Adams’ pre-recorded voice, pitched down) and the constant barrage of sales offers made by a blue-haired pitchman on a video feed, the future looks synthetic and soulless. Still, like a rose through concrete, the human spirit won’t be suppressed.”

Technology and ‘the future’ are part of Jocie Adams’ make up. She was born into a scientific family, and actually spent some time as a NASA technician between quitting The Low Anthem and getting Arc Iris up and running.

And her father devised a gyroscopic system which helped the operators of unmanned aircraft locate and disable landmines without the need for ‘boots on the ground’. Subsequently though the same technology would evolve into the catalyst for targeted killings by drones.

Hardly surprising then that Adams has spent a lot of time contemplating the good and evil of scientific progress.

The idea for ‘iTMRW’ grew out of a batch of songs Adams conceived while on a songwriters’ retreat in New Hampshire.

The choreography is provided by the contemporary dance theatre of Providence’s HDC Dance Ensemble. HDC’s Danielle Davidson choreographed the show after meeting Adams just two months ago. “For me, it was kind of rock ‘n’ roll,” says Davidson, “Can I make this happen — 90 minutes of dance for six people?”

Arc Iris plan to release the songs from ‘iTMRW’ as their next studio album.

This year it will be six years since they were last in the UK for a full tour, supporting St Vincent, although a 2017 headline tour was interrupted by a major, and unanticipated, TV appearance in the U.S.

Jocie Adams said on Facebook that any further dollars that came in would help to “bring this crazy project on the road”. Unfortunately, that’s unlikely to mean the UK. They spend a lot of time touring in America but bringing this across the Atlantic would probably mean something like the Manchester International Festival, which is in its fallow year.

Fingers crossed that some way can be found.