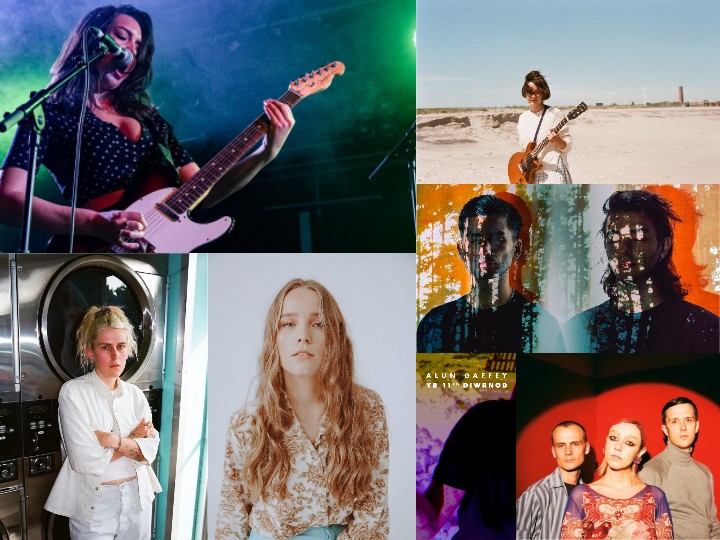 What? Love’s Not Enough

Why we love it: The Mysterines may be based on Merseyside but they actually sound like they could have exploded out of the NYC underground scene.

2019 saw them release their adrenaline-fuelled debut EP ‘Take Control’ full of  frenetic garage rock and roll, illuminated with the incandescent white heat of Lia Metcalfe’s remarkable vocals.  They have recently signed a publishing deal with Domino Records and are about to embark on a headline tour which is all ready selling out.  Their new single ‘Love’s Not Enough’ sees them finessing their raw explosive sound to produce yet another propulsive powerful slice of indie rock n roll. (Andy Von Pip)

Why we love it: With ‘Past‘ Alida gazes longingly out at the Bergen city views from her apartment overlooking woodland. “It’s about many things such as love, loneliness, hope, dreams, confusion, anxiety, desire” Birgitta says.  On the gorgeous ‘Past’ her wistful lovelorn tone swells framed in sumptuous and breezy widescreen Spectorish backdrops that are draped in elegant strings and drums. A delight. (Bill Cummings)

Why we love it? ‘Young Buck,’ is the first single lifted from Braids forthcoming new album. An upbeat and effervescent ode to impossible love that’s both impossibly catchy and a resplendent floor filling slice of electro pop.
“We wrote this song to capture the nervous anticipation of desire, the delicate chase of seduction, the highs and lows of obsession, and the humour in between,” stated singer Raphaelle Standell-Preston. “To want to possess someone, make them desire you, fall for you, only to learn that to lust is not to love.” (Bill Cummings)

Why we love it: Alun Gaffey returns with his new album ‘Yr 11eg Diwrnod’ this year. Alun Gaffey was a founding member of Radio Luxemberg that went on to become Race Horses. The bountiful bilingual first single ‘Yr 11eg Diwrnod’ which translates to ‘The 11th Day’ is impossibly catchy with funky 70s-esque textures, squelching keyboards and gonzo percussion whilst zooming melodies nifty riffs spark, an absolute multicoloured corker.

Why we love it: Lala Lala aka Lillie West has shared a new digital single, ‘Legs, Run’. Written and performed by West, with production by Yoni Wolf of WHY? This epic swirling electronic tapestry is pierced by West’s meditative and introspective narrative, unfurling through pulsing beat riven terrains before disappearing; an affecting epic. Accompanied by a video from production house Weird Life, paying homage to a familiar late ’90s favourite.

FFO: Half Waif, Why?, Madonna

Why we love it: ‘Best Friends’ is a effortlessly crumpled song that buries itself beneath lush instrumentation. Depicting a songwriting maturity and a less is more vocal investment that draws a tone dealing with loss.

Herships explains: “I wrote this song after a really bad break up.  I remember realizing how strange it felt that the one person I wanted to talk to, aka my best friend, was the person I was breaking up with; the one person I couldn’t talk too. I guess this song was a way to communicate to them how I felt even though I was never able to tell them in person.”

She continues: “It’s called “Best Friends” which is somewhat ironic since it’s really about endings and changes. You may find solace in memories but you’re also super angry at the same time.  And the weirdest part is that you will probably always love this person in someway or another even though you are saying goodbye.”

Why we love it: PRYLSD is the second single from their Lunar EP. Intricate and experimental, PRYLS further expands the Teme universe, cavernous, exploration the stunning electronic palette housing an exquisite vocal filled with grief.  “PRLYSD chronicles the nadir of an intoxicating relationship. It is filled with painful memories, set against an almost dreamlike soundscape that builds in intensity.” (Bill Cummings)