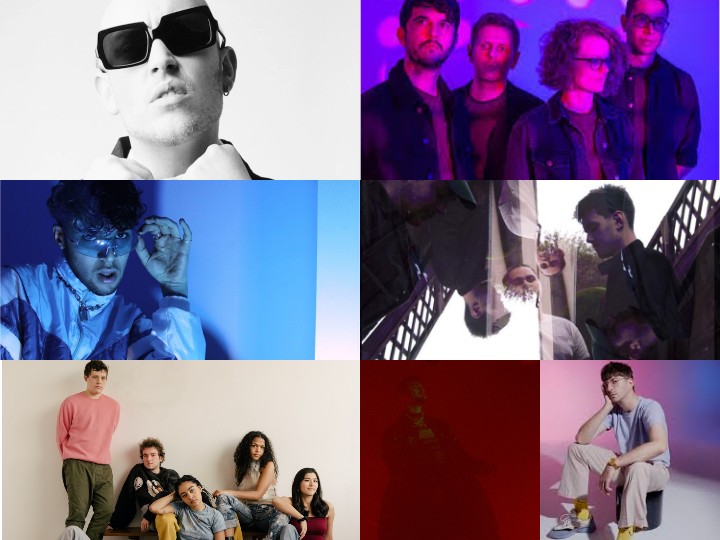 What?  MAE (Money Ain’t Everything)

What they say?  This song is about letting people know that money ain’t everything.  I feel like people nowadays tend to forget things in life that has so much more value than paper.  I’ve always wanted to pull in the urban direction, towards hip-hop and R&B. However, lyrics that are full of bullshit, saying that you have a fat gold chain or a hundred girls, have never interested me.  My drive comes from my need to constantly create and develop in my music as an artist.

Why we love it?   Drenched in attitude, this track is a big fuck you to a culture infatuated with making money.  The trap beat mixed with a swirling guitar, soft vocals and elements of R’n’B make this an easy listen.  It doesn’t rewrite the handbook of how to make a trap-inspired song but it certainly does it well.  (Lloyd Best)

Why we love it?  niterooms are an incredibly exciting band with a unique sound.  Sense is a perfect showcase of this.  Slick and laidback, with lyrics that are borderline hopeful but they also dip into a sadness that reaches out throughout the track to tear that hope down.  The tone in the vocal is sublime, perfectly conveying the emotions discussed in the lyrics.  A gorgeous taste of things to come when their “Sense – EP” drops on the 24th of April.  (Lloyd Best)

What they say?  Marcus shares his struggle with feeling present and asks “why does the world go on spinning?” a reference to the 1962 pop song “The end of the world” by Skeeter Davis, while also referencing the 1999 cult classic “Girl, Interrupted”.  After releasing his bubblegum pop-sounding first project which tells a story of escapism from the real world, he’s now faced with some harsh realities that the world isn’t as friendly as it is in the movies.  Inspired by the noisy rock of the 00’s punk-pop movement mixed with some electronic and glitchier elements the song plays like something you’d find on myspace in 2007 and with the intent of doing so.

Why we love it?  Boy, Interrupted is an energetic mish-mash of genres, it feels very Charli XCX meets Sum 41.  It takes me back to my teenage years in the best way possible and yet still feels very current with the polished production and electronic, glitch-pop elements.  A solid entry into the versatile discography of Marcus Connolly.  (Lloyd Best)

What? The Bluest You

What they say: “This song is a live favourite of ours. It is a fly on the wall look into a household where one person’s depression is affecting everyone else who lives there. The song doesn’t address the feelings of the person suffering with depression, it is a sort of commentary from the viewpoint of the rest of the family.”

New single ‘The Bluest You’ will be released 24th April via Libertino Records. A new album is promised for 2020, keep an eye on this one.

Why we love it? Swelling and evocative, this gorgeously shot excavation of how the atmosphere can become ladened with melancholia when someone in a household is suffering, is a meticulously crafted piece of songwriting. Threaded with glistening guitars, contemplative melodies, and a vocal that’s both wistful and dreamy. The outro is deliciously enveloping too. This is Kidsmoke expanding their palette and it makes us eager to hear more! (Bill Cummings)

Who? WEIRDO
What? EUROTRASH

What they say? After hitting a creative block and focusing on ‘the normal life & paying too many bills including “broken mind & heart tax”‘, the non-conformist once again returns with enigmatic single EUROTRASH.

A political reference, a fun twist and a catchy melody and production form together into something that sticks around your brain for days; EUROTRASH shows WEIRDO’s attitude and outlook at the world from an English songwriter’s pair of eyes.

Why we love it? Funky and playful this inventive slice of electronic pop is layered with intriguing samples and a vocal that’s layered with confusion and a tongue in cheek attitude to a world in crisis. Absurd yet ladened with hooks and imagination, Pee pee and Poo Poo would approve.  (Bill Cummings)

What they say? The 20-year-old songwriter touches on the most vulnerable parts of growing up in 2020. “I don’t want to be portrayed as too put together. I’m still working on myself. I’m constantly changing and growing and falling apart and coming back together.”

Stripped back and shot through with an emotive poignancy, “garden” tells the story of leaving a negative person or behavior in the past, the fear that comes with not trusting yourself to be okay on your own, and the type of growth that only comes with time. It showcases Krell’s maturity as a songwriter with the layers to peel away in her self explorative lyrics, it also shows off her exquisite haunting vocal tone and talent.  (Bill Cummings)

What they say?  I was asked by the unknown Japanese startup SHITEN to test their virtual reality media player 2 years ago among some other people.  Being disconnected from reality to listen to music sounded like a neat idea so I thought it would be nice to make some songs and present it in a music video to help them spread the word.  I had no idea they decided to sell an unapproved beta version of the device in a vending machine to gather more data.  After the testing went wrong for all the participants including me, the company vanished and there’s no one to contact.  Most of us experience random disconnections from reality even without the device on and this side-effect doesn’t seem to fade away.

Why we love it?  An interesting electronic dreamscape that builds into a full-frontal assault of chaos as the synths grow and the beat drops, growing larger and wilder with each passing drop.  It’s like James Blake on acid and almost as insane as the story that sparked its creation.  (Lloyd Best)

Why we love it? A gorgeously arranged track from New York Collective MICHELLE. It flows smoothly along at its own pace, relishing in the calming acoustic guitar, the relaxed main vocal and there’s a nice contrast between the different voices that come in and out. The track feels leisurely like a relaxing walk in the park, the subject matter is much darker than the music would lead you to believe but it all works in service of each other.  (Lloyd Best)