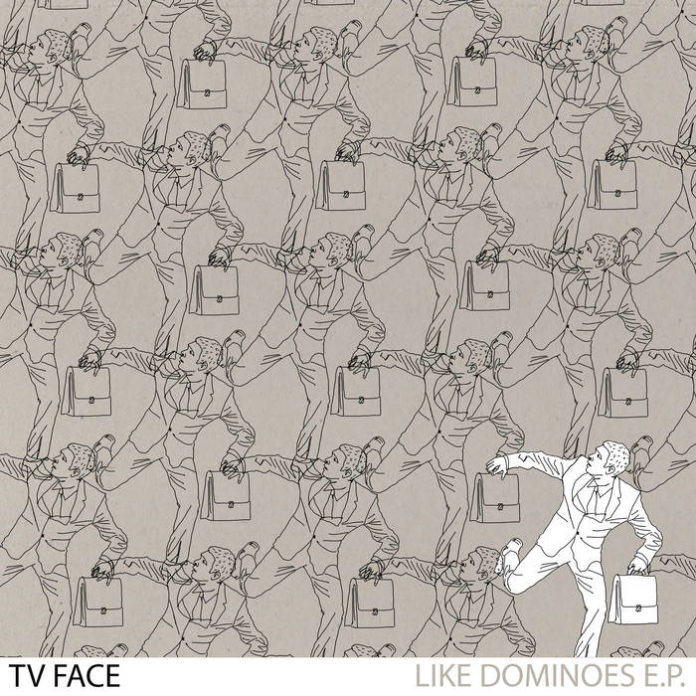 You can’t get more DIY than TV Face. The band’s first EP Like Dominoes is 99.5% completely band member made. Not only have the 3-piece from Lancaster written and performed all of the songs, they’ve also mixed the EP themselves and their lead singer Steve has created all of the accompanying artwork, which includes some cool illustrations for each song. They’ve definitely given this project their everything and it shows.

I love music that sounds urgent and intelligent. The first track of this 4 song EP is the heated ‘Like Dominoes‘ which lyrically reminds us, that more now than ever, we need to pay attention to the society we’re living in. Whilst the band’s drummer Neil insistently ensures that each beat of this song registers within our ear drums, lead singer Steve sweetly sings “they’re imitating, like counterfeit dictators, so old and exposed, we see them falling like dominoes“, alongside a melting guitar. Trust me when I say that you won’t be able to get the word ‘dominoes’ out of your head for weeks after listening to this track. It’s my favourite track on the EP.

‘Oh Death Is Coming‘ is a weird and distorted song which foretells the death of a woman with a wooden leg. The vocals of lead singer Steve and bassist Brigit add an eeriness that makes you feel like you’re on a horrible fairground ride, that you’ll never be able to escape from. There’s a playfulness that accompanies the darkness and demise that is at the heart of the EP’s theme. It’s quite clever. They have a lead singer who sounds like a post-punk angel, delivering messages from the deepest and darkest parts of society.

This is a band that likes making a lot of noise and it shows in ‘Yarn‘. It’s clear that having only 3 members doesn’t impact on TV Face’s noise production levels. If you’re looking for a break in intensity, you won’t find it on this track. Ending their EP with the song ‘Cold Potato Salad‘, which reflects on the repetitive mundaneness of life, keeps the high octane pace of the record going nicely.

This EP fits very much into the current indie, post-punk landscape that bands such as The Murder Capital, Egyptian Blue and Talk Show are creating.

TV Face were scheduled to support Mush on tour, but this has now been rescheduled. It’ll be interesting to see if they can replicate the intensity of the EP in a live show. TV Face are definitely a band to keep your eye on. An exciting EP from a band with a bright future.