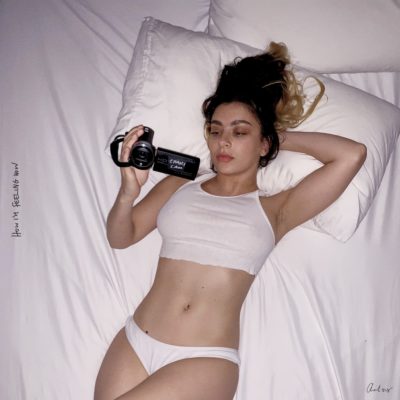 Charli XCX’s songs are often bound together by highs and lows. She contrasts the euphoria of nights out with the following day’s comedowns. She adapts this theme to the loneliness of pandemic-induced isolation, pairing a sense of longing with looking  forward to future  good times. She set a goal to complete an album from scratch in six weeks, and she’s engaged her fans by soliciting their input throughout. How I’m Feeling Now is a response to the unprecedented situation we’re in, and it’s a poignant, emotionally-connected and powerful statement.

When Charli announced this project in March, it seemed like an insane amount of pressure to put on herself. She has a work ethic similar to Prince, who dropped classics at a ridiculous rate in the 80s, so maybe it’s not so surprising that she pulled it off. Charli released her most mainstream album only eight months ago. She’s also started work on two other albums she aims to release before the year ends.

The quick assemblage has worked in Charli’s favour. Charli was a very strong album, but was slightly overstuffed to be in the same league as Pop 2 or the very underrated (by Charli herself), Sucker. Despite raw emotional themes, there’s a breeziness and spontaneity that makes How I’m Feeling Now zip by.

Just like ‘Next Level Charli’ from her last album, this opens with one of the most aggressive songs. She recently admitted that she likes to challenge the listener from the get-go. On ‘Pink Diamond, Charli doubles down on the abrasive energy found on ‘Next Level Charli’ using huge industrial beats and head-spinning laser-like synths. Charli warns us, “I just wanna go real hard” with a relentless urgency.

‘Forever’ is the perfect juxtaposition of her brand of bright pop and noisy lo-fi production. The waves of shoegaze distortion are laced with one of her prettiest melodies. She repeats, “I will always love, I’ll love you forever, even when we’re not together” — it’s one of the album’s most intimate and romantic moments. These moving lyrics are enhanced by the accompanying video, which is made from meaningful footage or images that she requested from her fans . As the tempo speeds up towards the end and layers of starlit synths appear, Charli’s comforting words eventually melt away into an airy and trippy sonic landscape.

‘Claws’ is a delicious bubblegum PC music nugget based around the goofy repetition of her joyfully singing, “I like, I like, I like, I like, I like everything about you”. Her voice gets manipulated in different ways — a common musical trait on the album. It’s a dazzling extension of the hyperpop she’s been perfecting since ‘Vroom Vroom’ and the Number One Angel/Pop 2 mixtapes in 2017.

There’s a startling display of creativity revealed by how quickly the songs go by for the listener. ‘Detonate’ has a speedy fluttering synth-line that recalls ‘Unlock It’ — one of Pop 2’s highlights. Despite the beautiful melody, it’s underpinned with vulnerability and anxiety about her relationship as Charli asks, “I don’t trust myself alone, why would you love me”. The sped-up vocals, glitchy beats and strobe-light synths show Charli’s love of The 1975. ‘C2.0’ takes the chaos of the previous album track, ‘Click’, and smoothes it out into a lucid Max Tundra-esque coda. ‘I Finally Understand’ has a catchy two-step beat that’s a call back to 2000s chart pop. She opens herself up and sings of her fragile nature — “my therapist says I hate myself real bad”.

Charli saves the best until last with the dizzying two-punch of ‘Anthems’ and ‘Visions’. The former starts with a trancey synth that recalls JX’s classic hit, ‘There’s Nothing I Won’t Do’. It’s a typical move for Charli to make her most defeated subject matter into the biggest banger, thanks to the turbo-charged bass. With a robotic tone she proclaims, “I’m so bored”, before integrating the song with stream-of-consciousness statements, expressing her relatable frustration — “try my best to be physical, lose myself in a TV show, staring out to oblivion, all my friends are invisible” and, “go online shopping, I’m so uninspired, I just wanna breathe”.

‘Visions’ ends things with a cathartic energy, morphing several times. It begins as a sparse ballad that introduces neon synth arpeggios and then she throws in nods to 90s eurodance, shifts in modulation and finally ends with a happy hardcore hands-in-the-air end-of-night feeling. The increasingly intense breakdown is the one last hurrah before the lights come back on. Except they don’t come back on, and the unsettling reality hits again. The urge to go back to the beginning of this incredible rollercoaster of an album kicks in.

Charli lives and breathes creativity. She’s already amassed an impressive amount of material since True Romance in 2013. The way she put together her most cohesive and personal album in six weeks shows she’s working on a different level to most. How I’m Feeling Now will go down as the first lockdown album and a capsule for the strange year that is 2020. It acts as a diary for Charli’s own experiences, and it’s one that she’s left open for anyone to read and interpret as their own. It’s a phenomenal achievement of self-expression and the year’s most thrilling release so far, made even more so by lockdown constraints and the self-imposed quick turnaround.