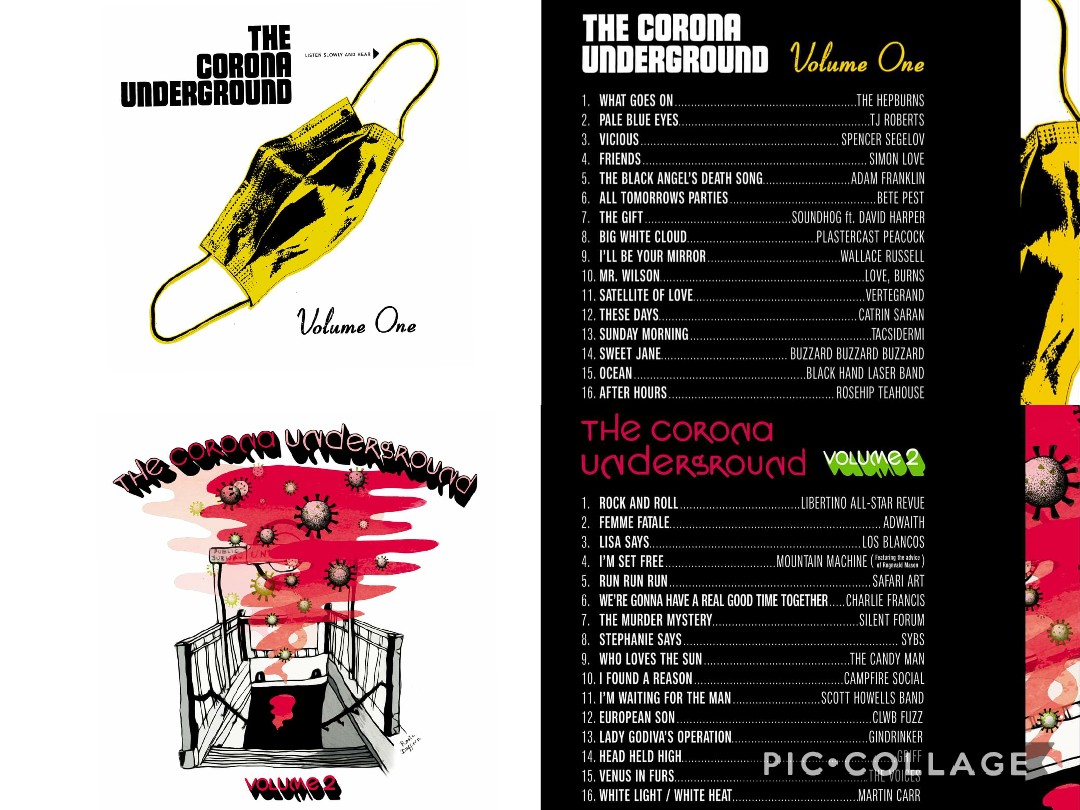 ‘The Corona Underground’ is a 2-volume release with over 30 artists contributing cover versions of Velvet Underground songs, completely free to download on bandcamp.com. The man behind the release, Jon Mlynarski, is encouraging people to donate to two charities Tarian Cymru and Race Council Cymru.

Gruff Owen from Libertino Records tells us: “There are a few interesting new Libertino projects here, Gwenllian from Adwaith has a new duo project ‘Tacsidermi’, so nice to finally hear her voice on record, she does Sunday Morning. I also dusted off the guitar from under the bed and recorded with a producer friend Winston ‘Rock and Roll’, my favourite Velvets song with contributions from KIM HON, SYBS, Papur Wal, Adwaith, Bandicoot and Silent Forum on vocals, sax and drums. Be nice to carry on the Libertino All-Star Revue project in the future for label bands to collaborate.”

The man behind the compilation tells us about the release: “My name is Jon Mlynarski. I am a Graphic Designer that’s done a lot of artwork for the Welsh music scene under the name Safari Art over the years, I also sing and play guitar in Black Hand Laser Band.

About the project: When lockdown was implemented I immediately started trying to think of things to do to keep occupied, and I was thinking about my musician friends and how they were probably bored too. So I started thinking, what could occupy and engage us all and be constructive and even beneficial to others. Zoom parties don’t really cut it after a while, and you can only watch so many box sets on Netflix. Then one night I picked up a guitar and started playing Beatles songs. Everyone likes the Beatles right? Why not do a Beatles lockdown cover album? Why not raise some money in the process? Excitement ensued. So that was it. I contacted all my musician friends and told them the idea and they were mostly all up for it. I gave them a song from The Beatles Revolver album, 2 weeks to complete it, and chose Tarian Cymru as a worthy proceeds donor as they are sourcing much needed PPE to healthcare workers of Wales.

I came up with the name Corona Revolver and uploaded the songs and artwork to bandcamp.com and it was a huge success and got a lot of radio and press coverage. I was shocked at how creative people had been and the quality of the music! Immediately I set about a second project, this time I chose the music of The Velvet Underground, Lou Reed and John Cale. I wanted more acts to create cover versions so I contacted Gruff Owen at Libertino Records who I have done some artwork for and asked him to ask around to see if anyone on his label were interested in doing a tune and it turned out the majority of the Welsh music scene were into the idea! The list of people asking to submit songs just kept growing and we were lucky enough to get some amazing artists on there such as creation records legends Martin Carr from Boo Radleys and Adam Franklin of Swervedriver.

Welsh Music Prize winners Adwaith are also on a few of the songs and we even had an act Love, Burns record a song in New York City for the project. I ended up with 32 songs submitted so I split it to a 2 volume release. It was like Christmas every time a song came in the music is so creative and amazing quality. It’s incredible what people can create with limited means in trying times. Every artist was excited and enjoyed the challenge and it made lockdown a lot more bearable for us, we created some great content for people to listen to and raised good money for great charities. For The Corona Underground release we also ask that you donate to Race Council Cymru who are working to promote race equality, art, heritage and cultural activities for black and minority ethnic communities across Wales.”

Search ‘The Corona Underground’ on bandcamp.com
There you will find the album and links to donate to both Race Council Cymru and Tarian Cymru.
https://coronaunderground.bandcamp.com/