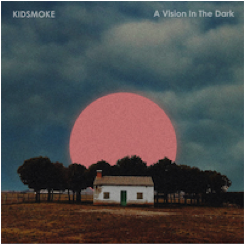 The culmination of years of work and a super run of singles, Kidsmoke‘s debut album, A Vision in the Dark, sees the light of day this week and it might just be the soundtrack of flickering hope we hold as we emerge blinking and unsure into the light after months of hard lockdown.

A delicious set of meticulously crafted, propulsive guitar pop songs that Wrexham based Kidsmoke have pieced together on a grand pallette that’s as widescreen as the skies vast vista.

With the ghosts of the heritage of British and American guitar pop music of the 80s and early 90s flooding in, their skyward twin pronged melodies house infinitely bittersweet melodies supplied by frontman Lance Williams, James Stickels (bass/Vox) and Sophie Ballamy (guitar/Vox) as they clasp the faintest sense of hope through pain to their breasts.

Tackling the unbearable lightness of being throughout but always spying the end of the horizon. Addressesing themes such as helplessness, relationship dilemmas, negative influences, and even those moments when you have to sit back and laugh at yourself.

‘Passenger‘ glimmers and zooms down the tracks with the wistful release of guitar licks, underpinned by Ash Turner’s clip clip drums and honey eye’d harmonies speeding away from the life you want to escape. The delicious ‘Laya’s Love’ sways with a surfy abandon of basslines and jangly guitars, hitting the sweet spot between pastoral indie pop and 80s sophstipop of early Prefab Sprout. Weighted with Lance and Sophie’s two handed boy/girl melodies “you gave me all I had, everything I ever wanted/but sometimes everything isn’t enough” a sweet falscetto capturing a sense of regret and the heart bursting feeling of coming through it together despite the travails you have been through. Life affirming.

Excellent previous single ‘Take Me To The River‘ ties into this lovelorn theme, as Lance extoles that he “doesn’t want to lose your heartbeat/ i don’t want to lose a love like this” as a relationship runs like sand through his hands.

‘Higher‘ is built upon cascading waves of melodic detail, the chiming guitars sighing wistful melodies gather into an arms aloft widescreen uplifting beauty are the sound of blinking your eyes as you spy the sun for the first time. It shows off a self awareness and a depth of emotional sensitivity.

The scorching, spiralling power pop of epic standout ‘She Takes You Under’, is littered with massive Lance and Sophie’s dreamy lovelorn vocals, epic chiming guitars and bittersweet, glorious Pains of Being Pure at Heart-esque harmonies. In a superb singalong chorus they sing “I’m falling apart/I’m falling apart”, wrestling with the subject of the first nervous steps into therapy and dealing with your demons in order to move forward.

Lance explains: “The song’s narrative follows someone at odds with themselves; being aware that issues need addressing but feeling reluctant to go back down the rabbit hole. It centres around my experiences with counselling and talk therapy.”  It could be the soundtrack to a big budget Rom-Com and that absoluetly is a compliment.

In some ways the one minute plus of ‘Kaledscope‘ with its delicate whisps of harmony shows off Lance’s vocal at its best, his hints of melody held aloft by his bandmates, shot through with a tenderness and poetic refrain, this heart on the sleeve moment of beauty, is a tantaslising glmpse and then its gone. ‘Rising Sun’ is like a comet spinning across the night sky shimmering with superb guitars influenced by My Bloody Valentine and infused with hints of the Lotus Eaters‘s wistful knack for summer dappled harmones. The result is a pulsating, psych-tinged gorgeous gem ‘about pushing against what other people expect of you, even if that pressure is coming from the people you are closest to.’

Swelling and evocative closer ‘The Bluest You’ is a gorgeously shot excavation of how the atmosphere can become ladened with melancholia taking the viewpoint of the rest of the rest of the family when someone in a household is suffering from depression. It’s a superbly crafted piece of songwriting. Threaded with glistening guitars that intersect the shimmer and jangle Johnny Marr and the gaze of Kevin Shields, with its contemplative melodies and a vocal that’s both wistful and dreamy. The outro is deliciously enveloping too. James says: “This is my favourite track. I originally intended for it to be an instrumental – thankfully I soon decided against that idea. I knew from the moment it was written that it was destined to be the last track on the album.”

Plunging into painful emotions and memories, capturing tiny moments of euphoria and joy in sepia and the humour that punctures our sheer pomposity. Kidsmoke’s endlessly infectuous sound with layers that peel back on each listen, could easily fit on a radio station’s playlist at any point in the last thirty plus years. This is what Kidsmoke do, craft and burnish moments that capture the tiny glimmers of light in times of darkness and by God do we need it right now. ‘A Vision in the Dark‘ is an absolute triumph.