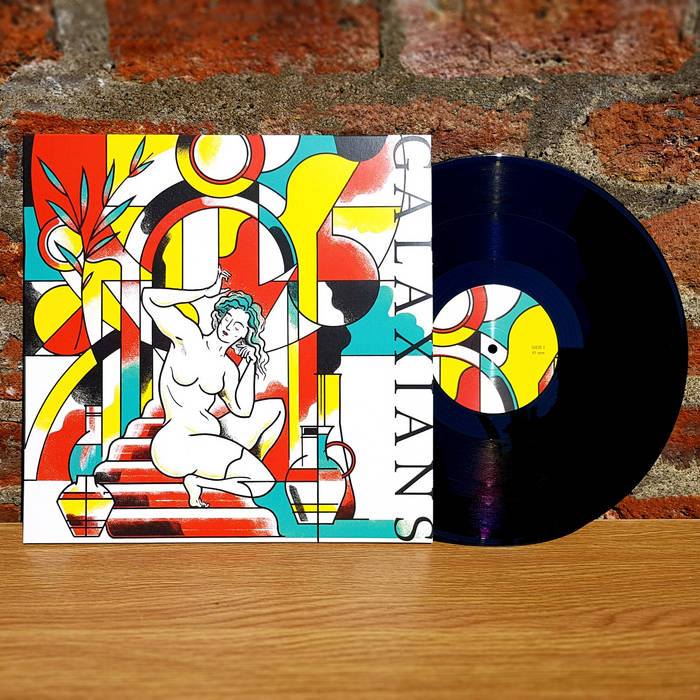 Repetitive beats was a phrase that became evident in and around the middle nineties, all due to what was called the “Criminal Justice and Public Order Act 1994“. This would prohibit public gatherings, where, among other considerations music which comprised a “succession of repetitive beats“, more commonly referred to as “rave music”, was played. And why have I chosen to use this term when it comes to the latest release by the “neon-lit disco-funk” trio Galaxians? Perhaps because when immersing myself in this second album of “joyous tunes”, the term “repetitive beats” kept coming to mind, although deep funk may also apply. The further I walked this path, the more I made the connection with Chaka Khan‘s album release of 1984 I Feel For You, an album on which the title track made a massive impact on myself and many others, we all “felt for Chaka“.

Rolling out this album ‘Chemical Reaction‘ makes a play to take centre stage and although singer Emma Mason‘s vocal is perhaps an octave lower than Chaka’s during this number, synth man Jed Skinner sets the mood, in an 80s style, deep and low. This is an album filled with disco moments, rather than those repetitive beats of the rave scene I referenced earlier, although this journey has been a very worthwhile one. Other divas who have been used as a reference during Emma’s evolving course have been Aretha Franklin, Grace Jones and Diana Ross, although I am keen to use my earlier comparison, Chaka Khan to do so when it comes to this artist. Perhaps it’s the deep synthesiser that Skinner likes to lace many of their tunes with, or the repeating drum loops that Matt Woodward (drums) uses to act as their firm foundation, that bring me back to the 1980s. These are crisp tunes that would stand-tall against any of their original contenders, but it’s Mason‘s confidence that makes this whole article very real.

9 very filling tunes make this album ready for the dance-floor, in terms of both disco and deep house along the way. ‘Not The Money‘ features a gloriously squelchy synth that takes me back to 1984 and Beverly Hills Cop, whereas later on this journey ‘Horizon‘ is a trip alongside Luther Vandross, with what could almost be his backing orchestra, making this a very believable choice. A latino-ride on ‘Over It’ follows, using an example of the breadth this album portrays, with the final track ‘Heat Of The City‘, a stunning moment to square this circle, with fast keys, beats and Mason‘s solid vocal making this an unforgettable journey. If you haven’t heard Galaxians or the voice of Emma Mason, then make sure that you see the tracksuit colours and graphic representation of Gregorian art that adorns the sleeve of this album. Be it repetitive beats or loops, everything about this makes it a statement worth catching.