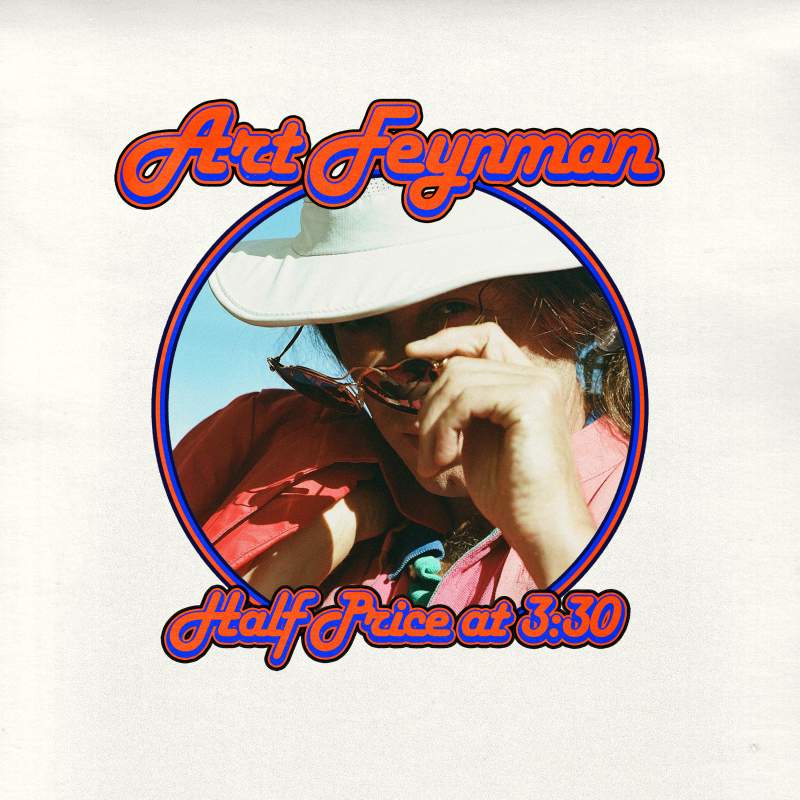 “Never a story came perfectly to life in the way I envisioned.” California-based Art Feynman – a solo project from Luke Temple, who is also the lead singer of Indie rock group Here We Go Magic – tells stories on his new record Half Price at 3:30 that seem to discuss the notion of existential crisis. Sometimes cynical and sometimes supportive, Feynman is good at switching perspective through fictional personas. His soft vocals, reminiscent of Joe Newman of Alt-J and José Gonzalez, are paired up with world-music influenced art-pop that’s incomparable with other music around at the moment.

‘The Physical Life Of Marilyn’, which is one of the best examples of existential crisis on the record, encapsulates hesitation and decision-making well. The female protagonist highlighted in the song’s title is not an ode to Marilyn Monroe, but an archetype of older women whose biological clocks are ticking fast and they can’t decide whether to leave a failing relationship or stay put to increase the chances having children. The line: “Has she achieved the aim?” typifies the societal pressure on women to procreate. The hesitation is also kind of felt in the track’s arrangement. After the industrial opening, the pace of the track remains constant, as do the repetitive lyrics, however it becomes more intense through the presence of eerie synths, as if the fear is suffocating Marilyn. ‘Nancy Are You Hiding In Your Work’ – chunky drum machine and mystical harp  – is also about a female character. It sounds like a friend staging an intervention to help a woman who’s been hiding from life problems with excessive productivity. “Drinking all your Listerine like wine,” is an intriguing line to show her work/life balance.

‘Not My Guy’ and ‘Taking on Hollywood’ are rather more cynical. The former – which mixes old skool hiphop rhythms with moments of West African jamming (also hear the intoxicating single ‘I’m Gonna Miss Your World’ for a similar vibe) – is a brave track indeed, as it takes a swing at current U.S President Donald Trump’s term in office. “He’s not my guy” sounds like something Trump might say. Feynman pronounces the following insult in a quasi-documentary style voice: “To raise the monster from the swamp. To raise the Frankenstein from the swap.” Yet the most interesting commentary is when it’s about Trump’s plea to build a Mexican divide wall (note for outdated reference that the song was written in 2016): “Line’m up, send’m out, everybody wants to know what you’re talking about.”

‘Taking on Hollywood’ hears Feynman take on an autotune filter, and uses water droplet effects, but the lyrics are grittier, as he is seemingly mapping out a revenge on the biggest movie industry in the world (perhaps for the notorious abuse scandals). “I’m planting my seed firmly in the ground. I’m taking on Hollywood, I feel sorry for those sons of bitches.” Art Feynman has called the character he’s adopted in the song “a lazy narcissist” in interviews.

‘Ideal Drama’ demonstrates existential crises on a global scale, pointing out that the same methods that help us succeed will also lead to our destruction. The production is marvellously unique. A loop lurks in the background that sounds like a crowd chanting but trapped inside a windy bubble, as if they are protesting change but their voices are being filtered out and ignored. It’s definitely an experimental moment on the record, that may require a bit of patience from the listener, as the instrumental part is largely unchanged for the last 2 and a half minutes.

Art Feynman’s second album doesn’t have the strongest concept but musically it’s consistently bold and diverse with plentiful absorbing moments (including the many instrumental breaks), making one curious to seek out the experimentally-minded musician’s creative influences. As well as what the puzzling album title actually means…