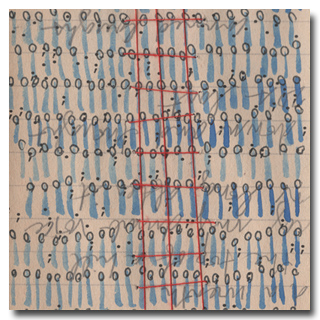 To herald the arrival of the new record, God Is In The TV is delighted to bring you the première of the video that accompanies one side of the single, ‘Descending G’ (w/Steve West). The other side, ‘Phrases Redacted’ (w/ Bob Nastanovich) will follow on the date of release.

Both tracks were initially recorded by The Illness in the basement of Heworth Moor House, a former maternity home in York, on the Portland, Oregon musician Scout Niblett’s old 8-track machine. ‘Descending G’ – including Alisia Casper (backing vox) and Zandra Klievens (flute) – was then sent to Steve West at his home in rural Virginia and he recorded his vocals at Marble Valley Studios in the state’s capital city of Richmond.

Having been Pavement’s drummer since 1993, when he received ‘Descending G’ Steve West may well have recognized much of that nonchalant woozy charm that was apparent on so many of those great Pavement songs. He certainly feels at home with ‘Descending G’, as his casual drawl reinforces the song’s relaxed sense of infectious insouciance and adds to it’s really quite delightful slacker groove.

The video – jointly filmed by Steve West at EccoHollow Art and Sound in Staunton, Virginia and The Illness in York, North Yorkshire – comes to us immersed in pale yellows and purples, enhancing the song’s dreamy, neo-psychedelic qualities. The footage therein captures aspects of the recording process for ‘Descending G’, interwoven by vintage clips of sound technicians who wouldn’t have looked remotely out of place had they been working behind the scenes on Tomorrow’s World, that old BBC television series on new developments in science and technology. This fusion of past and present reflects the timelessness of ‘Descending G’.

The new record’s artwork is by Whitney Courtney Nastanovich