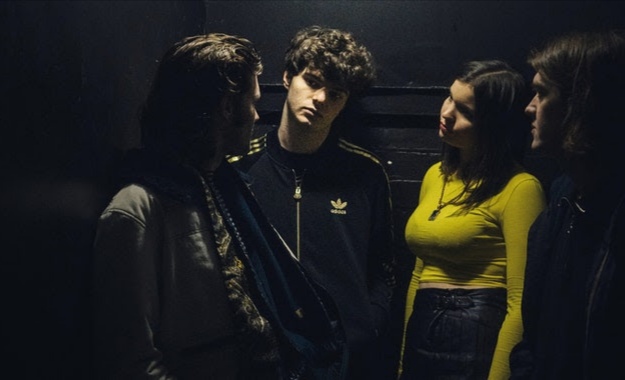 As the rain hammers at the pane of my front room window, the cat stirs beside me and I swap over legs on the footrest, a bead of condensation runs off my ice cold can of beer onto my hand and it’s mildly irritating. This is as bad as it gets sat in the warm and dry and comfortable, watching a live stream of Working Mens Club.

By Christ what I’d give to be a sweaty mess, having dragged myself off the drenched Manchester City Centre streets, soaked through, down into a basement sauna, perspiration dripping from the roof, overpriced beer getting lukewarm in milliseconds as the band slap out New Order come The Fall come early Prodigy. 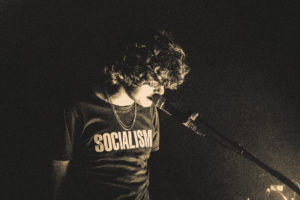 The previous stream I had the pleasure of experiencing was a different world. Laura Marling on her own in a church. This is a full band doing the next best thing to playing to a baying mob and trying to recreate the scene as best they can without piping in crowd noises like some two-bit Premier League football match on Sky.

There is only one moment when it becomes a little weird, that slight hesitation when a crowd isn’t sure if a song is finished before it whoops and hollers. Well that happened and then there was still silence which was almost strange until you remember in the blink of an eye and they crash into the next number.

What is truly gratifying is the big curly mop of hair that Sydney Minsky-Sargeant has, the sign of someone not letting any amateur loose on his barnet without some kind of certificate. A story many of us can relate to. 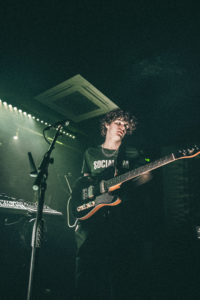 Flanked by life-size cardboard cut outs of The Queen and Danny De Vito (it’s always sunny in the basement) but by the end Her Majesty has had her head ripped off by a semi-naked Syd before they depart stage left to shuddering and squealing amps.

Whilst it is easy enough to mic up an acoustic guitar in a building known for its acoustics, making a basement venue sound good to someone watching on their mobile phone on top of a mountain in Outer Mongolia is a feat of sound engineering genius.

And this sounds surprisingly incredible. Admittedly, this is no group sat on milk crates in their backyards for free, this is a 9 pound a pop live stream through Dice, but it is as clear as a bell superglued on a keyboard. 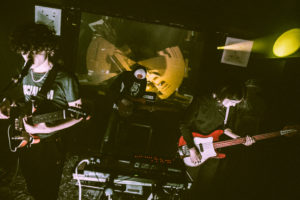 The last time I saw this lot was in a bar called the Purple Turtle in Reading. The owner seemed to on something and was kicking off which meant the atmosphere was very odd which spread to the stage and they didn’t seem to want to be there.

Tonight, they seem relieved to be playing again. As a band. In a room. Together. Kicking off with ‘Valleys‘ as they usually do, it has all the hallmarks of Sumner, Hook et al but with a post-punk vocal. Things really step up with the double header of ‘Bad Blood‘ and ‘Cook a Coffee‘ where angular guitar envelopes the drum machine and synth rhythms. Multi-instrumentalist Mairead O’Connor scythes through the synthetic noise with punchy Dr Feelgood/Wilko Johnson guitar on the former, as Syd straps on and makes a glorious din on the latter.

The aesthetics of the stream, whether deliberate or not, hark back to The Tube from the 1980’s. Parts of the video seem fuzzy and hazy like a club and the neon lights add to the boxed in, almost claustrophobic basement feel. 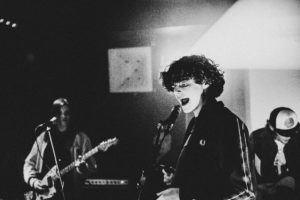 There is a bit of a ‘White Rooms and People‘ shaped hole in the set and some of the incessant use of synth on ‘A.A.A.A’ could have been punctuated by something a little more varied but this a mild gripe.

Let’s be honest, we’d have all rathered be there than watching on a small screen but we must accept our current lot in life and appreciate gladly that these events exist. I’ll expect more of the same high definition sound however.

The bar has been set. I’ll have a pint please.