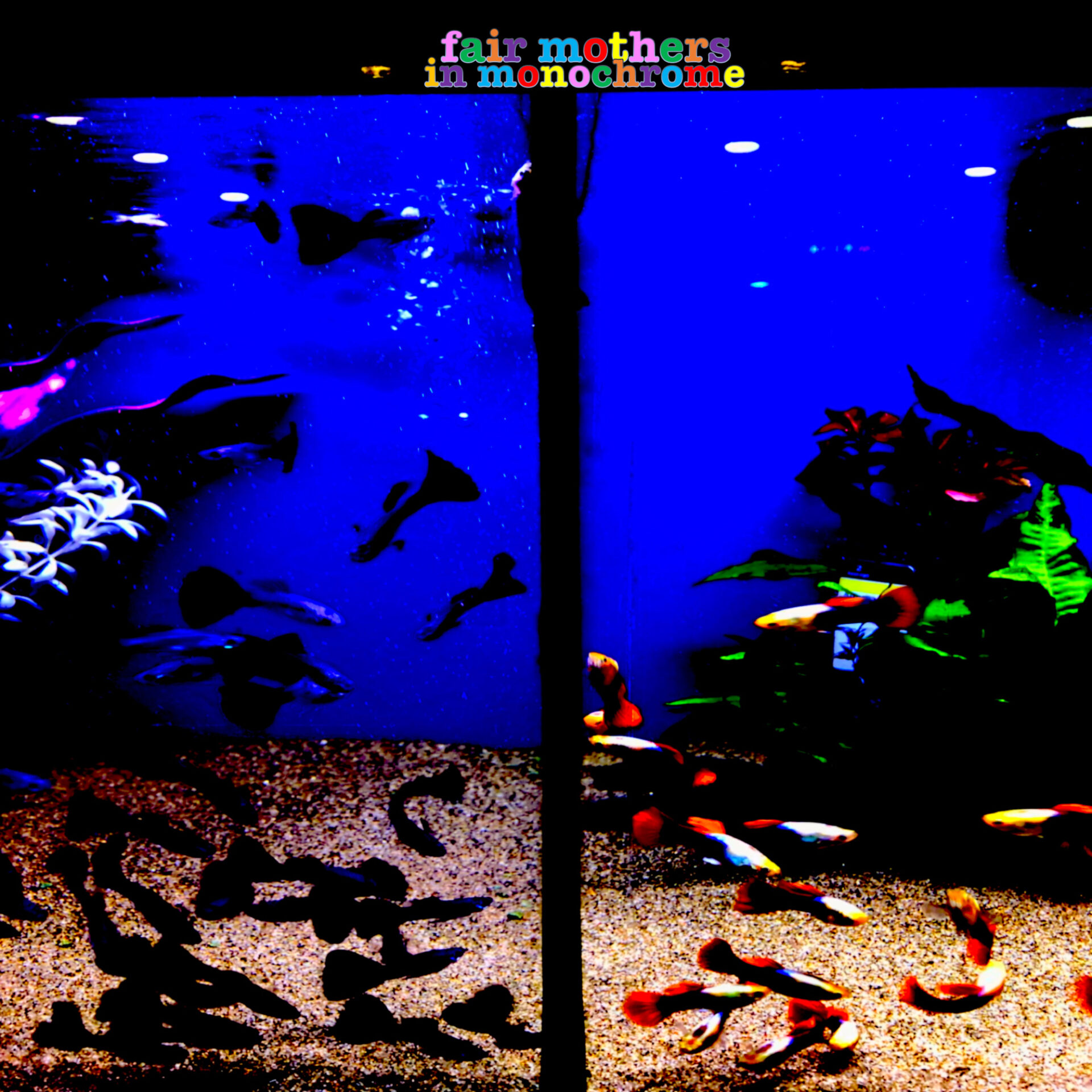 Released this Valentine’s Day, Fair Mothers’ collection of quiet, melancholic epistles to love on Separate Lives was something special. Granite-etched weird Americana via the Scottish coastal town of Stonehaven, it was both weighty with its sense of solitude, yet wispish and flitting in its execution. While new album, In Monochrome was recorded in the same sessions, it’s an entirely different beast.

A quick side note, to begin (bear with me).

It is said that those born under a waning gibbous Moon often seem wise beyond their years, are able to bring meaning to their experiences and learn from them. It’s also said that anything started in the waning of the Moon is condemned to decay, to fade and be forgotten. Setting aside the disputable reliability of folklore and inherent contradiction, there is still something about all that and the struggle between spiritual wisdom and the reality of life that feels true of both Fair Mothers and In Monochrome. Allan’s weathered voice is archetypal for this kind of music from the soul, the instrument of choice when tracing the fault lines and scars of lived experience, where young hopes were chipped away or eaten up from the inside. In Monochrome is certainly a night album and also feels like an obituary, written ahead of time, a series of deeply personal accounts scribbled in vanishing ink, daring time to erase their significance.

Opener ‘Magic Bullets For Dracula’ drags itself out of the eerie emptiness afforded by the slow, steady kick and snare while sparse upright piano picks out chiming highlights for the stalking predatory hookline to grasp onto. It almost recalls the minimalism of Eels, particularly the understated guitar work toward the end, with the bitterest edge to it. Then there’s a surprising turn. ‘Birds & Bees & Tiny Fleas’, the longest track on the album is a hallucinatory stumble through different dissonant textures, synth string refrains and flashes of harmonic vocal colour provided by Faith Elliott. A poetic apocalyptic vision of the future of humankind (“we are mostly fucked”), the song’s earthy layers of crumbling leaves, moss and birdsong are invaded by radio static and a distant voice that overwhelms its surroundings.

In Monochrome features vocals from Eliott and Canadian artist Dana Gavanski alongside cellist Pete Harvey, harpist Esther Swift, and a brief scream from Johnny Lynch (Pictish Trail).  Having recorded his first album Through These Fingers Yours and Mine with Kathryn Joseph, Allan has continued to engage a diverse group of collaborators. Working with others, particularly female voices, Allan believes, is key to unlocking the heart of his songs, lending them more emotional sides. That is evident on In Monochrome, an album that “really signals a search to regain contact with feeling”  and which might otherwise come across as self-indulgent without ‘witnesses’ to Allan’s sense-making here.

‘Harpy’ rattles, opening with a single guitar stroke resonant with madness and old grudges. “Is it right? To return to the scene of a crime?” Allan asks, possibly talking to his reflection, talking himself down from a decision, or a regret yet to be realised. Elliott howls back, a ghostly voice from the glass “So old man in the mirror, what you got left?” The track is brief but grave, a parallel perhaps to the dark fleeting thoughts that occur in seconds which have the power to twist fate and change lives. Next, ‘In Black Covered’, a song that Allan says, rather modestly, “had a perfect chord structure right from the start that resisted any attempt from me to make it better,” is sad but blithe by comparison, lifted by the sweet bow sweeps of Harvey’s cello. An album highlight, ‘Unwinding Road’ is a teary bar room confessional, its solitary piano creaks, forging a space for Allan’s take to be told, occasionally enjoined by trembling cello. At its centre is the “Ugly Spirit”, the unconscious psychological forces, or (by his own account) the literal demon that possessed William S Burroughs to kill his wife, Joan Vollmer. “There are versions of me / Better versions of you”, Allan repeats, maybe acknowledging the double tragedy and consequences surrounding this now infamous story. Vollmer was the original patron and philosophical muse for the main Beat writers. Burroughs later claimed that Vollmer’s death was the single catalyst to his becoming a writer, his best defence against repossession by the same spirits.

Next, Allan returns to ‘Crazy Lamb’, an early track from his debut and originally a duet with Kathryn Joseph, (trivia alert) from way back in the days when they performed together around Aberdeen as Tiny Bike. On In Monochrome, he’s joined by Dana Gavanski who had been staying in Scotland, recording for the Song, By Toad label’s Split 12″ Volume 7 release. Allan explains that ‘Crazy Lamb’ was the very first take on the first day of recording.  Here it remains, intact and splendidly imperfect, a slice of time captured when both artists were finding their co-creative space in a song that has deep personal significance. Leading us out of the album, into its liminal shadow, is ‘Monochrome’. Written by Allan after a particularly fierce argument with his wife, it concerns the fall-out of such a moment, “the ruin of our life and losing family,” Allan explains. His lyrics split the infinite silence that is felt in between each pause and sigh: “We let cold winds into our home / They say days spent in separate lives / They disappear, what do they know?”. Our departure point is ’16:39′,  a letting go of sorts, by way of a metaphorical train journey through a never-ending tunnel, an anti-revelation, a collapse of self-worth and utter contempt for what this passenger has become.

Devastating and brilliant. Which pretty much sums up this album.

‘In Monochrome’ is released on 7th August, via Song, By Toad Records.