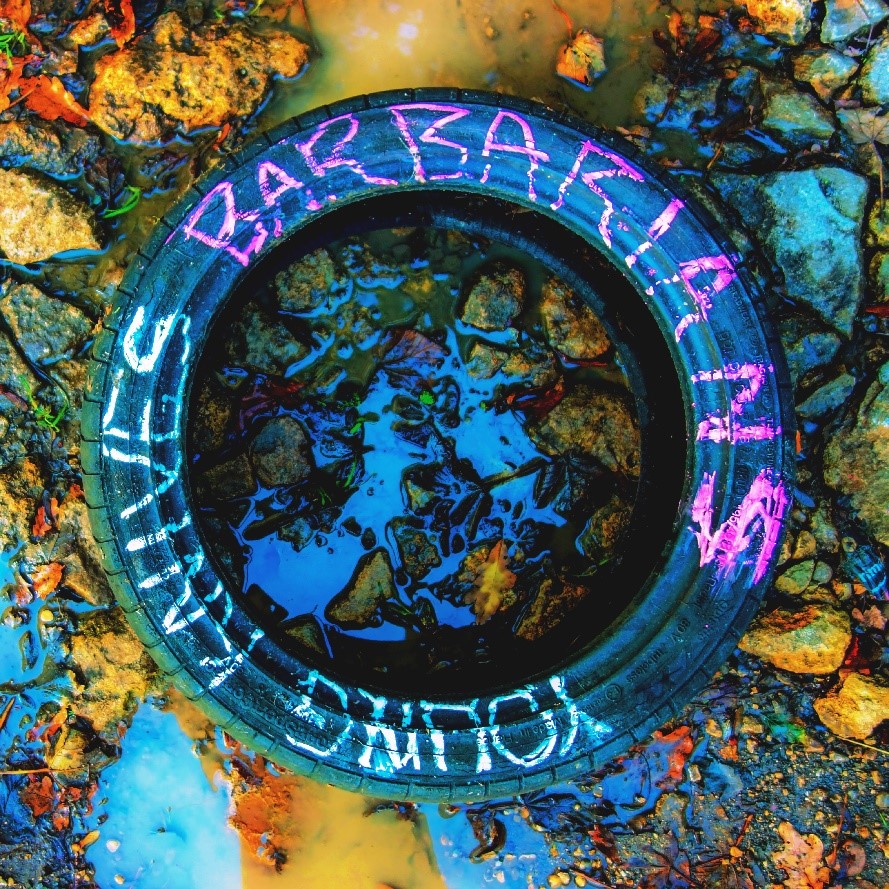 Some readers will need little introduction to Young Knives. For long-time followers, fifth album, Barbarians, is an exciting reminder that the Dartnall brothers Henry and Thomas, aka The House Of Lords, are reliable oddball artrock wizards, but if 2006’s Mercury-nominated album recorded with Andy Gill, Voices of Animals and Men, is your only reference point, you have some serious catching up to do.

Fortunately for fans, Young Knives have been generously transparent about their influences for Barbarians and have shared stories and technical insights to subscribers of their website. Unfortunately (perhaps), it makes writing descriptive reviews a bit redundant. This is not a criticism. Their vlogs and track-by-track youtube videos for the album, as well as the bonus material that you can buy on the special edition cassette version are a really entertaining and thorough exploration of their creative process. It also puts more control in the hands of a band who have sometimes been labelled pretentious, or simply knocked for seemingly ‘trying too hard’ to be weird and edgy.

To avoid all misunderstanding, this time around Young Knives have declared a manifesto:

Young Knives is not a band

Young Knives is not music

Young Knives is not art

Before you judge and skip on to the next review, it’s worth noting how they unpack this on their blog:

“Everyone should have a manifesto. This is ours. It’s pretentious as hell, as it should be. But every creative person needs a guiding principle and this manifesto is a reminder not to believe in our own myths or the myths others believe about us… We don’t want to be the boys in the band, the band is a fluid thing, we play with other people, it is not special in that it is not a closed society of ‘talent’. Anyone can make music. We are just 2 middle aged dads who devote too much time to making a riot, and we don’t want it to be sacred, or exclusive, or worried about status or how “cool” it is… If you are concerned with your work being good art, you are concerned with the wrong thing, you are limiting your possibilities. And if you are calling yourself an Artist you are basically saying I am part of a world that other people are not part of.”

You don’t need to share their ideals to see this is a clear statement of intent, setting them off on a long path of their own making, literally. Barbarians took several years of snatched time to put together and was entirely self-made, recorded and produced in their granny-flat annex home studio just outside Oxford, bringing in family and friends to complement the team of mainly two (since departure of regular drummer, Oliver Askew). From their brilliant series of lockdown ‘Caravan sessions’ livestream events produced by eleven-year-old Arthur Dartnall, to lyrical inspiration for the surreal, epiphanic ‘I Am Awake’ coming from Thomas’ daughter Enid, or the 1968 field recordings of a school choir in Papua New Guinea on ‘Holy Name ’68’ taken by the Darntall’s mother, Young Knives is now effectively a family business. A family business that makes thought-stirring, ear-melting, challenging noise-pop.

While not really a concept album, big ideas are to Barbarians as touch paper is to a firework. Having consumed the bleak philosophical writings of John Gray, radical feminism of Valerie Solanas (the activist who shot Andy Warhol) and an array of riot-ready soundtracks from Throbbing Gristle, This Heat, Death Grips, Einstürzende Neubauten as well as more mainstream hip-hop, Kendrick Lamar, Portishead, Bowie and Scott Walker, it’s no surprise that the manifestation of those ideas is an intense and often disorienting attack on the senses; a shipwreck strewn with the passing flotsam of familiar pop culture to hold onto. The central theme though is the inherent, unchanging barbarism of the human race. Gray’s assertion in his book Straw Dogs is that the assumption that barbarism disappears when there is progress is flawed. Those who have power and new technology just find new ways to exploit and debase those who don’t. This idea is explored from multiple perspectives across the album, and unlike 2013 album Sick Octave, which at times felt like a bit of an indulgence, Barbarians holds this together like a bare-knuckle boxer on the brink of an all-or-nothing last round.

Could this be Young Knives best album to date? Possibly. It certainly resonates with today’s constant barrage of what-the-fuckery. The freakish power of the title track (inspired by the extinction of the aboriginal population of Tasmania), ‘Sheep Tick’ or ‘Society for Cutting Up Men’ would usually be enough for one album, perhaps padded out (on the advice of a label-hired creative producer) with some softer-edged balladry.  Young Knives have no appetite for any of that here. Instead, there’s the free-form horror flashback of ‘Red Cherries’, the crowding, pounding fists of ‘The Swarm’ demanding “Freedom with a big F”, and the grotesque folky chimera ‘Jenny Haniver’, a slowly rotting, salty corpse of deprivation and human perversions. The stand-out among all of these scary carnival rides is ‘Only A God’. Evoking the rage of PiL‘s politically-wired monologues, its waves of caustic guitar-fog build to create a sense of utter loss and rejection by those who should care and are supposed to help us when we need them:

Too many have had too much / Nothing but bad timing

Barbarians is the soundtrack to the worst and the best in all of us. It’s the determination to win versus the desire to crush your opponent into a bloody mess. The unthinking animus that throws shadows over reason and inspires collective hatred and paranoia. The siren calls of former glory and taking back control and freedom, from what? Barbarism has not faded into obscurity, it’s here stronger than ever.

And so are Young Knives.

Sign up to the Full Barbarian Experience on young-knives.com where you can access free downloads of each track and information on the inspiration behind the album.