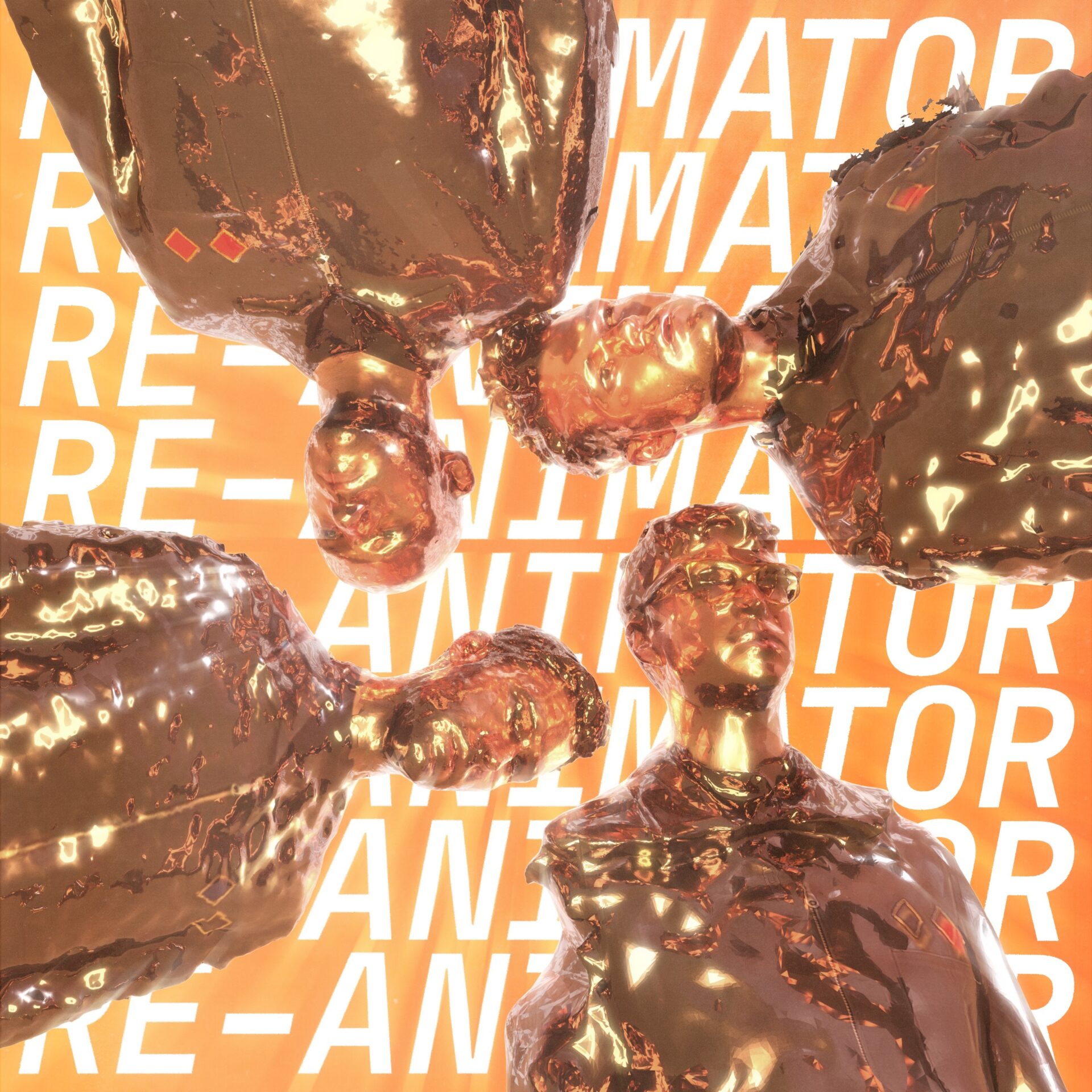 Bicameralism is an intriguing theory. It’s a theory about how different the human mind used to operate some 3000 years ago. What could be now identified as a form of schizophrenia or auditory hallucination, it was normal for humans to have two independent sides of their brain; one was providing the instructions and the other side was obeying without questioning. This allowed people to become obedient slaves to their own personal cognitive God. This is according to the 1976 book The Origin of Consciousness in the Breakdown of the Bicameral Mind written by psychologist Julian Jaynes, who theorizes that after some global catastrophe humans suddenly woke up from this semi-conscious involuntary state, and as a result the dual mind started to connect and the free-will to make choices had begun. The ever-intellectual Jonathan Higgs and Everything Everything became fascinated with the idea of having two voices, how it relates to a struggling mental health and the God-follower dynamic that’s a consequence of those conditions.

Their fifth album Reanimator tackles with this subject, pairing amusing and thought-provoking lyrics with catchy indie pop – that occasionally spirals into alternative rock territory in Radiohead-like moments. Higgs’ falsetto, which was originally a bit of a required taste – is also growing more beautiful (in a Thom Yorke way). Hear ‘Moonlight’  for a good example.

Everything Everything express this concept in a varying scale of subtlety (admittedly the strong concept does get a bit lost on some tracks) but single ‘Arch Enemy’ is at the most extreme. A bicameral man follows the instructing voices in his head, only to find that its actually a fatberg that lives in the sewer. Yet it doesn’t matter, he worships him anyway, calling him “sphinx of grease”, “sewage moon” and “king of the oil”. One reason for his obedience is perhaps because he is convinced that if he lets the fatberg loose on society it will wake up the public to their sins, as they themselves created this monstrous being. “It’s time to show your face.”

No matter how surreal or ludicrous as Everything Everything can get (in a good way), there is always an intellectual social commentary within. ‘The Actor’ is less metaphorical than ‘Arch Enemy’ and presents the schizophrenic nature of bicameral people and how they think the other side is a different person head on. “It’s easier for him. To take on everything. Fit my clothes and has a face like mine. If he acts the same then I don’t mind it all.” There’s something Fight Club about the comfort of having a braver alter-ego. Jonathan Higgs’ vocals is constantly shadowed by a swirling mimic, which adds an appropriately duality to a track that would otherwise be a run-of-the-mill pop song.

Opener ‘Lost Powers’ links mental illness with myths and conspiracy theories. After saying the mad thought “I get smaller every day. My God made you out of clay. And he say, come on, you only lost your mind”, the character in the song then goes on to make a sensational claim about crisis actor kids lying about school massacres. Yeah, these people exist. Their theory is that the government pays a bunch of “actors” to pretend to be victims in some political motivation. Higgs refers to other myths; a staged moon landing on ‘Big Climb’ and boogeymen on ‘It Was A Monstering’. Name-dropping Slenderman, Purple Aki and that creature on the airplane wing in that Twilight Zone episode ‘Nightmare at 20,000 Feet’. The protagonist does not fear them though, his lonesome hopelessness drives him to wish that he had their minds instead. I guess you need to bicameral to understand. “I want your head, in my head. Alive!”.

If that sounds like the mentality of Frankenstein, then the beautifully gothic ‘Black Hyena; goes a step further, as Jonathan Higgs adopts the character of a psychopathic surgeon: “The alligator is as dead as your remote control but I will need it for this.” Just so morbid. Playing god by meddling with nature is likely to result with nature fighting back. “Black hyena gonna bit the idiot” sings Everything Everything’s frontman but a more effective line is “On a banana peel, he slips and breaks his brain in two. The master cracks into life,” because it not only illustrates the foolish karma that beckons for the self-indulgent scientist, but it references the two sides to a bicameral brain that could cause such irresponsible decision-making.

The other track that addresses the mistreatment of nature is the aforementioned ‘Big Climb’, which like ‘Lord of The Trapdoor’ deals with two troubling issues that the younger generation are facing. The former is sympathetic towards the youth, who are tasked to clean up the older generations’ failure to tackle climate change, as well as the poorer societies that are most damaged by it. “You can be a drone or the god-killer-bee that I love/ The choice is to be a slave to the big time. Champagne cork in your windpipe”, suggests that you could stay trapped in a comfortable wealth, or join the killer-bee-like clan of angry determined activists. The title refers to the big climb in the quality of technology, yet the quality of nature has fallen.

A disdain on technology for the younger generation continues on ‘Lord Of The Trapdoor’ as this a commentary on internet trolls. A continuation of the same discussion found on ‘Ivory Tower’ from Everything Everything’s last record A Fever Dream. “Full suit of armour and a dribbling mess” is a clever line to express how a certain anonymity gives the troll a protective persona and highlights the true patheticness of their personality. Higgs brings back the fatberg in the track: “Pray to the blubber and drown them in fat!”

The album ends with ‘Violent Sun’. The apocalypse is not a new subject for Everything Everything, but the way they approach it this time is refreshingly different. It is reminiscent of the last scene in Lars Von Trier’s Melancholia, where the characters remain calm, as they observe Earth’s fatal planet collison. In the face of impending doom, Higgs is telling us to enjoy and seize the moment. Treat the supernova as like a watching a slightly more destructive eclipse. Watch the end of the world with someone you love. “I wanna be there. When the wild wave comes. And we’re swept away. I wanna be there. When the wild waves. For us.” Then the track suddenly ends. Everything Everything have always been a great guide to life and now they are also the encouragement we need to deal with the anxiety of 2020, and if we suddenly develop a bicameral condition.