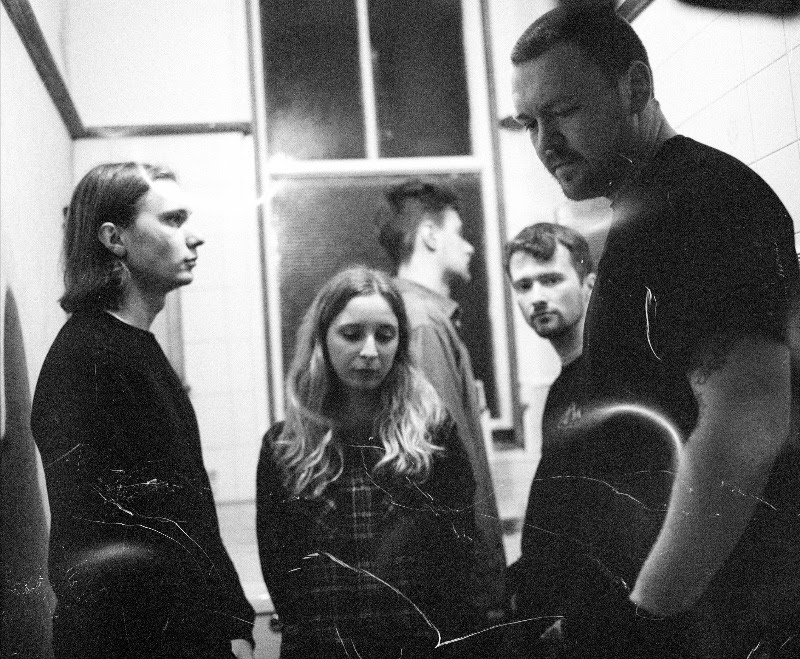 Built up around the songwriting and vision of band-leader Leo Bargery, Edinburgh collective Mt. Doubt craft a sound that is deeply cathartic, intensely personal, soaked in regret yet clinging onto distant hope amongst the wreckage. Its an impressive, intricate and brooding sound that has echoes of early records by the National or Peter Gabriel but exists in its own orbit: densely layered with instrumental and vocal peaks and drops, these sudden shifts jolt you from your inertia.

Mt. Doubt. has been a shifting mass of musical output since the band’s genesis, which saw the release of their debut album My Past is a Quiet Beast in 2015.

Bargery quickly went on to release second record In Awe of Nothing in 2016 (on Scottish Fiction Records) before releasing three EPs, ‘The Loneliness of the TV Watchers’, ‘Moon Landings’ and ‘This Must Mean Something Awful’, throughout 2017 and 2018.

Four years in, and Mt. Doubt have performed across the country: from Inverness to Brighton, from the Isle of Skye to Cardiff, and a whole lot of places in between. Including appearances alongside the likes of Idlewild, White Lies, We Were Promised Jetpacks.

In late 2019, the band signed to Last Night From Glasgow in advance of releasing their third album Doubtlands this week. We caught up with lead songwriter Leo Bargery to find out more about Mt. Doubt.

Hello there, I’m not too bad thanks. Still indoors, contemplating hoovering. I think I can put it off another day…

Mt.Doubt appears to have a revolving cast of players.  How did you meet?

It does, it’s been a joy for me being able to play music with so many talented musicians and friends. The band has been a little more ‘stable’ over the last few years, but change is the oil on the hinge I think.

We’ve all met exclusively through music actually; I’ve borrowed a lot of players from other Edinburgh bands and have built up a really talented collective who I’m privileged to play alongside!

What was the first song you ever wrote?What was it like?

A- The first song I ever wrote was called ‘A Caved in Mind’ for my high-school band These Fading Polaroids, and was my actually my first ever vocal outing (it’s probably out there in the YouTube ether…). It wasn’t totally dreadful I suppose… it definitely lent into more ‘alt-rock’ territories and is a very direct product of my teenage angst; lyrics about being “broken” etc. I’m not ashamed of it, so that’s something!

As Mt. Doubt, I jumped straight to putting out a full length album. I’ve always adored albums and discovering bands with more extensive back-catalogues to delve into, so I really coveted that for myself. The first record was called ‘My Past is a Quiet Beast’ and came out back in 2015! It was a one-man affair back then, and probably had some of that high-school, ‘alt-rock’ hangover. I feel quite removed from it now, but I’m definitely still proud of having created it.

Edinburgh gets a bit of a rough ride in terms of reputation, and I think that’s maybe fair when applied to our venue-situation. Aside from Sneaky Petes which is a legendary local venue here, we don’t have many good places for ‘small’ or new bands to cut their teeth. We’re lucky that Glasgow is a train, hop and a skip really.

In terms of bands, there are tonnes of amazing artists in the city (check out Redolent & Hamish Hawk!), perhaps there’s not really a cohesive ‘scene’ but I’d rather be removed from any sort of co-dependency anyway.

In bed before 10 O’clock

Can you tell us about your new album Doubtlands? Over what period was it written and where? What inspired the songs, they sound deeply cathartic? Who produced the record?

The bulk of ‘Doubtlands’ really came together through late 2018 and 2019, though there are bits and bobs that had been floating around for longer and had never quite made sense in other contexts. It was written at my mother’s piano, in the kitchen of the flat I’ve recently moved out of it and in various student accommodations up in windswept St Andrews!

There was no collective inspiration really, I tend to draw from autobiographical sources, so each song is attached intimately to lots of different little, specific occurrences which take on much grander meanings in collage. It’s definitely an emotional record for me and is, as you say, quite cathartic! It’s a bit of a roadmap into my way of thinking and for me to make sense of the ups, the downs and the everything in between!

It was recorded in my childhood home and produced by our friend Luke Bovill, who’s a very talented chap!

I love the layered dynamics of songs like ’68th in Orbit’ and ‘Headless’ where an instrumental vocal shift can jolt you and elicit an emotional response. What’s ‘Dark Slopes Away’ about ?I get this feeling of heavy loss and decay but also a hope that things can change for the better.

Thank-you! I think there’s a lot of nostalgia and regret laced through the album and I think that it really comes to the fore on ‘Dark Slopes Away’. There’s a sense of resignation to things being as they are, but an ebbing hope that underpins the whole thing. On a basic level, it builds up a narrative of daybreak casting a light on things you’d rather not see and a yearning for the nature and the beauty to wipe out the grey, ring-road sadness.

Last night from Glasgow seems like a great label and community to be part of, when did they approach you and how do you think their model works for fans?

They are, they’ve been tremendous to us already! I had known head-honcho Ian for a few years and was aware he appreciated our music, it all came together very naturally about a year ago! I’m excited to see what our future together holds!

The model is amazing. It’s mutually beneficial for fans and artists, it’s hyper-efficient and places value in the music above all else! Viva LNFG.

If your house was on fire and you had to save five albums what would they be?

A – Well from the records I actually have in my possession here, I’d say… (subject to speedy and abrupt alteration)

We’ve had the pleasure of sharing stages with some excellent bands like Idlewild, We Were Promised Jetpacks and White Lies but one that always sticks out in my mind are a Welsh band called Silent Forum who we played with down at Gwdihw Café in Cardiff a few years ago! They put out their debut record recently which is excellent – they were just really engaging and exciting to watch! Nice guys too.

I’d like to steal Warren Ellis and let him lavish his instrumentation all over everything I do. Also, Laura Marling because her voice is otherworldly!

Do you have any online events/ streams lined up?

I’ve been doing weekly pop-up streams every Thursday just to say hi to anyone whose passing and to keep myself sharp performance-wise, well, less-blunt anyway.

We’ll be having a little listening-party on Sunday 20th, details will be floating around our Facebook page and people can express their interest to be part of it there!