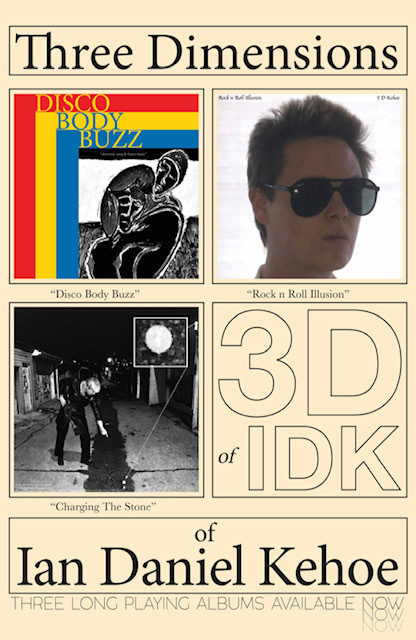 At the beginning of August, the Toronto-based producer, song-writer, multi-instrumentalist, poet, and visual artist Ian Daniel Kehoe – also the former Attack in Black member as well as being the drummer for The Weather Station and Julia Jacklin – released a trio of new albums all on the same date.

Rock & Roll Illusion, Disco Body Buzz and Charging the Stone are described as being “Three Dimensions of an individual and solitary worker, each of which uniquely refined, both sonically and stylistically. In these dimensions you can find pop, disco, synth, alt country and more.”

All three albums were made available on the day of release to buy and listen to exclusively via Bandcamp with the prospect of then coming out to streaming and other platforms album by album. These albums will be arriving individually throughout the duration of the year.

‘There With You’ is the first single to be released from the Three Dimensions. Available via Tin Angel Records, you can listen to it here: