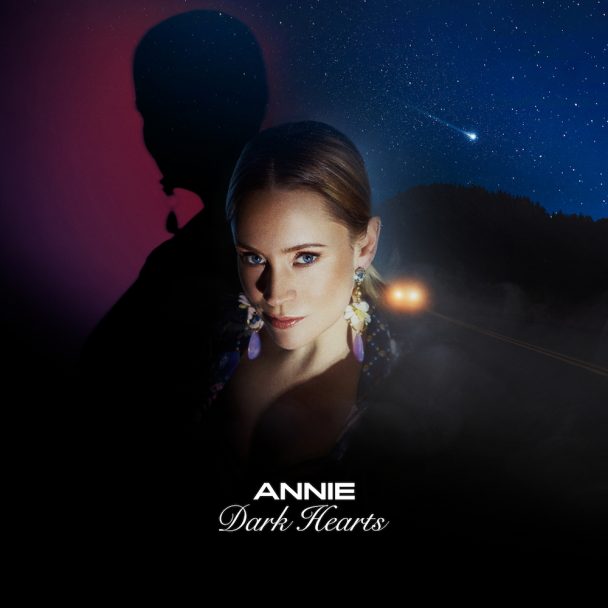 Patience is key with Norwegian born Annie. Her flawless debut album, Anniemal, appeared five years after her first single, ‘The Greatest Hit’. Dark Hearts (her third album) finally sees daylight exactly 11 years since her last full length, ‘Don’t Stop’, which itself was delayed an entire year due to label issues. In that time, Annie has sporadically put out quality singles and EPs that explore a variation of styles, including the political punch of 2014’s pulsating single, ‘Russian Kiss’ , the murky, 90s-rave-flecked, ‘Tube Stops & Lonely Hearts’, and the delightfully sunkissed Endless Vacation EP. Best of all was her 2013 Richard X collaborative EP, A&R — a career highpoint for both. Each release was a glimpse into Annie’s talent for injecting her personality into any form of electronic pop she approaches.

Bizarrely ‘Chewing Gum’ remains her only visit to the top 40, and with this lack of mainstream success, it’s easy to forget how influential Annie was in 2004. Anniemal deserved the rave reviews, but they sometimes came from publications that didn’t view modern pop albums as a serious concern (one magazine even referred to it as the pop album their readers were allowed to like). She was a big part of the shift in how pop albums were viewed compared to the previous decade. Over the next couple of years, albums by Girls Aloud, Robyn, Róisín Murphy, Britney Spears and Sugababes were written about more seriously — a trend that has continued with pop music to the present day.

Annie’s return finds her taking a slight left-turn. She’s always had retro elements to her music, with her love of disco, 80s pop and 90s dance. On Dark Hearts she reaches for something different. Her vision is darker and set late at night when reflective thoughts enter your mind, as the credits roll on a movie you’ve been lost in for hours. Annie often comes close to the same noir synthwave aesthetic of the Italians Do It Better label, especially their flagship act Chromatics. The first single, ‘American Cars’, finds Annie drifting in slow motion to brooding synths, as her breathy vocals whisper, “going into the night, like a flash in the dark, see the tears in our eyes full of glittering stars, in American cars”. She stays in this lane on the bittersweet opener, ‘In Heaven’.

The other pre-release singles provide different textures that make Dark Hearts a compelling listen. ‘The Bomb’ revisits the same moody, late-night club music she captured on ‘Tube Stops & Lonely Hearts’. Annie’s robotic distorted vocals are almost hidden by flickering synths and a neat drum and bass beat. She channels Julee Cruise’s masterful Floating Into The Night album on the delicate spoken-word led ‘Corridors Of Time’, which blossoms into a dreamlike, string-drenched ballad.

‘The Streets Where I Belong’ is a stunning piece of 80s AOR-inspired pop. It brims with nostalgia thanks to the simple hypnotic bass-line, swooning city-pop styled synths and one perfectly executed FM rock soaked guitar solo. There’s a sense of comfort as Annie tells a story of her first love, DJ Tore Andreas Kroknes, who tragically died in 2001. He’s also the subject of Anniemal’s heartbreaking closer ‘My Best Friend’. The song begins with, “Annie Annie, they’re playing our song” — breaking the fourth wall like this goes back to ‘Chewing Gum’ and ‘Hey Annie’. She sings of recollections of her all-too-brief time with Tore — “all those summer days, in our town down by the bay, oh Annie close your eyes, pretend and then you’re back there once again”. It’s a poignant tribute, and as Annie recently pointed out, it is one of the most personal songs she’s ever done.

There’s an electric bounce to the title track and it’s one of the album’s catchiest songs (especially with the key change); however,it’s slightly more restrained than her most vibrant big pop moments (‘Chewing Gum’, ‘Me Plus One’, ‘Back Together’, etc). There’s melancholy sprinkled over this entire album and impressively there’s no filler considering the album’s length. Even a lesser song like ‘Mermaid Dreams’ lifts off in the second half when the electro prog synths appear, recalling Air at their most cinematic.

She flitters through different genres as the album goes on. The album highlight is the wistful electronic synth-pop of ‘Forever 92’, where Annie is at her most reflective (a theme that ties these songs together). She sings about a relationship from her youth. There’s a delightful saxophone hook leading the chorus, and guitars that are the perfect mix of 80s hits such as ‘Time After Time’ and ‘Bette Davis Eyes’. ‘Stay Together’ has a gentle tropical lilt that wouldn’t sound out of place on Niki & The Dove’s underrated last album. The swirling keyboards and 80s stadium drums are another new twist on the perhaps aptly-titled ‘The Countdown to the End of the World’.

In the beautiful hazy waltz of closer ‘It’s Finally Over’ (another song inspired by Julee Cruise/David Lynch), Annie sings in her most angelic voice, “and the birds will be singing and the bells will be ringing cos it’s finally finally over” . As with some of her best songs, there’s sadness caught in her voice as she sings of longing and loss — “all the tears I was crying, God I thought I was dying”. Annie still has the sense of mystery that’s characteristic of her best work, and her vulnerability and openness is deeply engaging.

Dark Hearts is an evocative record that’s well worth the 11-year wait from an artist clearly basking in her own sense of freedom. She was once asked by her label if she saw herself as a pop act or an indie one. Dark Hearts doesn’t answer that question, as Annie glides around decades of electronic music. It works well because everything belongs here and gives us an insight to her world, where she’s consumed by music. This gorgeous album is the essence of what makes Annie so special.