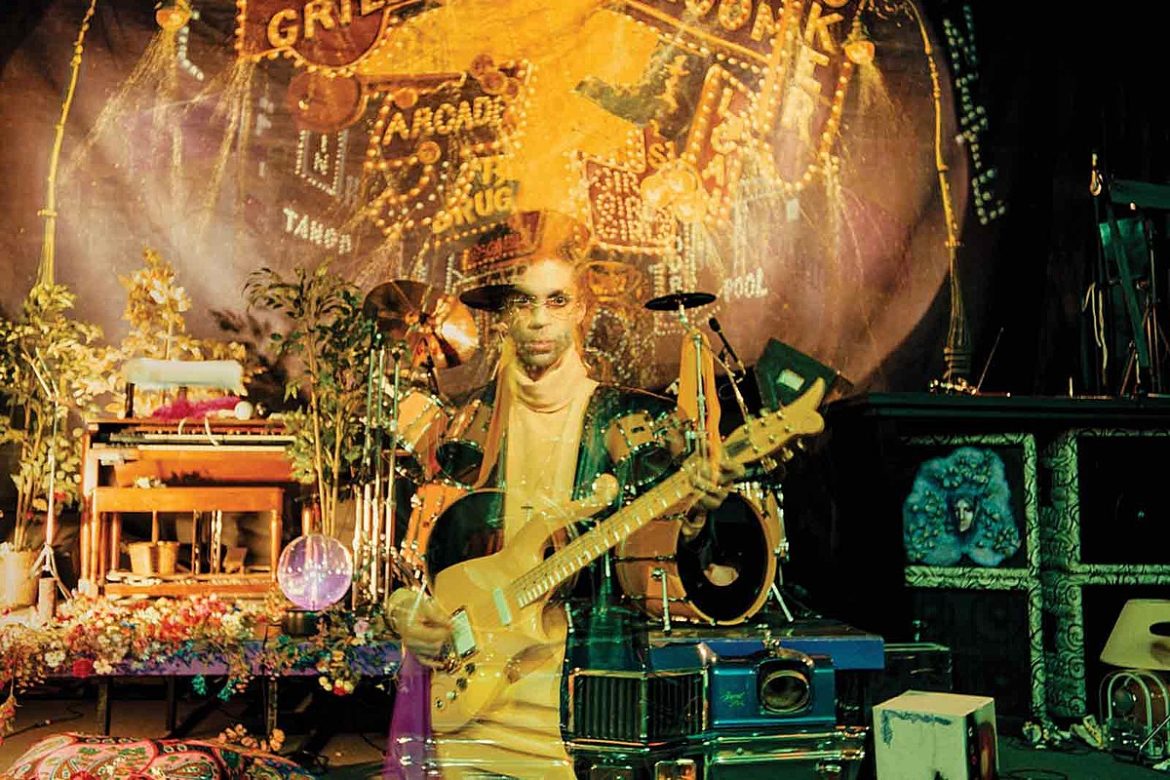 1987, along with 1967 and 1977 before it, was part of the late 20th Century’s three-pronged cultural Renaissance: when each decade reached a critically cultural boiling-point and branched in out all different directions in terms of its disparity of musical genres marking a welcome unification.

It would be superfluous of me to regurgitate the ‘usual album lists’ as a testimony to the above, but the following years with ‘seven’ in them simply have not been bettered in their respective decades. Fact.

Even in 1987, the internet was still many years away from being ubiquitous. We still had to (mainly) rely on newspapers, television and the music press for our token aesthetic fix. The transatlantic relationship back then wasn’t as symbiotic as it is now. But hip-hop, hair metal, indie rock and the tentative beginnings of ‘grunge’ had made their assault on the collective consciousness, and EVERYBODY namely Guns N’ Roses, Public Enemy and the Jesus and Mary Chain cited Prince as a prime influence.

At the time, he was a highly successful 28-year-old musical veteran who embodied a wholly individualistic mystic: a musical magpie who fluctuated between the past, present and future in his own work and with his influences. This was his definitive order of the day amid a bandleader’s backdrop of beautiful chaos and confusion. Ego was de rigueur. While intellectual understatement was cool and big-haired glamour all the rage; Prince firmly had his vertiginous boots in both camps.

His ninth album Sign ‘O’ The Times could not be topped as a synthesis for the whole era: marketing his own environment and that of ‘87. The album wasn’t just ‘product’, it was bombastic headiness. And now in late 2020, this album has been re-released as a deluxe edition with a plethora of unreleased tracks. Those with deep pockets will gleefully purchase it, using the fortuitous excuse of a potential second lockdown. We aren’t spending money on commuting; social distancing makes the simple process of going out an arduous process; holidays are off-limits, etc. The album’s title again could not be more pertinent. Time on one’s hands is now the common mantra.

Harking back to my days as a 17-year-old A-level drama student, I vividly remember seeing the video for the opening title track with its blatant minimalist communication stance outlining the urban and national traumas of the time. It was both Brechtian and paid an obvious debt to ‘talking blues’ – of the kind once practiced by John Lee Hooker and Curtis Mayfield and R.E.M., during the same year, stated that their landmark album ‘Document’ was influenced by the throes of the Iran-Contra affair.

So the themes continue unashamedly – alternating between hedonism and didacticism – of which Prince had nurtured since 1977. Prime ones: love, seduction, relationships, identity, religion, and of course, Joni Mitchell. Such differing is savoured with the exuberant ‘Play In The Sunshine’ which is an archetypal second track. This change of tack prepares us for the ‘90s blueprint of ‘Housequake’ – a precursor to his call and response en masse numbers. Funkadelic and Parliament were no longer working entities at this time. All the more fetching and mantle-inheriting.

‘The Ballad Of Dorothy Parker’ is essentially the lifeblood of the album empathising with ‘everywoman’ like his older contemporary Springsteen. Prince inserting the key line from Joni Mitchell’s ‘Help Me’ as Dorothy’s favourite song, gives it added nuance and depth. On the re-issue, there is an earthier version with horns. ‘Starfish And Coffee’ has a Middle America cheerleader zest about it. The culinary refrain takes it to heights of infectiousness and intimacy.

Things do get overly lascivious with both ‘It’ and ‘Hot Thing’. They are ‘come and get me’ with the Purple One’s brand of industrial rock bringing to mind a deviant coupling amid meat hooks and hanging chains. This is a marked contrast to the sincerity of the classic ‘U Got The Look’ and it’s epochal grated guitar sound. ‘If I Was Your Girlfriend’ has a control freak vibe and a weirdly warm ambiguity about it: needy and self-centred but open. Prince certainly revised the love song rule book.

The crowning glories are definitely the most accessible tracks on the album, which are conveniently towards the end. ‘I Could Never Take The Place Of Your Man’ has an eye-closing cinematic bridge, and Prince’s singing – within the grandiose production – rolls off the tongue and is almost childlike. ‘The Cross’ has guttural-sounding vocals and the Living Colour-style lead/rhythm guitar is the song’s tour de force, along with having the same empathetic lyrical quality as the Rolling Stones’ ‘Salt Of The Earth’.

However, for every silver lining, there is a cloud of conformity. ‘It’s Gonna Be A Beautiful Night’ panders to the marbled-washed denimed mindset of the time, and embodies the naffest excesses of ‘87. ‘Housequake’ Part 2 it isn’t!
It does, however, end with some degree of poignancy. ‘Adore’ functions like ‘Sweetness’ from Yes’s 1969 debut: that after a strong level of audio intensity, the rain has stopped and a path is cleared.

This deluxe edition comes with 45 (yes, 45) previously unreleased tracks – a lot of which are standard Prince fare which seem like works in progress or possibly dry runs/experiments. But they do not distract the listener away from the 80 minutes of the original album. For more than the casual fan, they are potentially mouthwatering. Miles Davis is in the house!

For convenience’s sake, I have chosen a select few. My choices commence with ‘Witness For The Prosecution’ which starts off supercharged and windy with contemporary topical funk insinuations right on cue – a slightly mournful call and response affair which is over the place. ‘A Place In Heaven’ is a feathery harpsichord-stroking Prince ballad descended from ‘Sometimes It Snows In April’: a spotlight genre of his own making that Prince would later indulge in post Revolution. ‘Eggplant’ is acceptingly pungent in a kind of 80s pop way which would definitely be out of sync if it was on the main album.

Even though it sets one of many soul trains in motion, ‘Rebirth of the Flesh’ is brilliantly brittle. Prince sounds more like his exact contemporary Michael Jackson than MJ himself, with an upfront strut coupled with “la la la” chanting stealing the limelight. ‘It Ain’t Over Til The Fat Lady Sings’ has a predictably strident jazz instrumentation. The long-awaited ‘Can I Play With U’ features Miles Davis with his cliched 80s pulsating interjections of the kind found on ‘Decoy’ and ‘You’re Under Arrest’. A bathetic mediocre track which promises but does not deliver (also true of the lyrically-uninspiring stationary ‘The Ball’). Like Elvis before him, Prince was prolific in experimenting with genres which were inconsequential, but could easily be popular amongst a certain demographic of ‘cult followers’.

But even Prince’s recent and not-so-recent past is seemingly paid homage to in the context of the reissue. ‘Adonis And Bathsheba’ is relevant to his low-key 60s infatuation circa ‘Around The World In A Day’ but comes across as an OTT psychedelic non-sequitur. The title is no doubt the redeeming feature. However, the welcome ‘Teacher Teacher’ from ‘85 is a like a shimmery version of ‘When You Were Mine’ from Dirty Mind redolent of a more direct straightforward era in his career. ‘I Could Never Take The Place Of Your Man (1979 version)’ is aesthetically tinny sounding, and of obvious historical value as it would undeniably compliment ‘I Wanna Be Your Lover’ – bringing everything full circle and giving a sense of unexpected lineage to the main album.

Like Sly and the Family’s Stone’s ‘There’s A Riot Goin’ On’ and Stevie Wonder’s ‘Songs In The Key Of Life’ before it; there is nary any complacency on ‘Sign ‘O’ The Times’. But there was probably a sense at the time that Prince could be trying too hard, and therefore was becoming a victim of his own complexity, even though the album was universally and critically acclaimed by the usual publications.

For a major artist, releasing a double album is usually ‘at their own risk’ and fraught with the nagging fear of alienating their own fans and generating polarised opinion: like with the Beatles’ ‘The White Album’ and the Stones’ ‘Exile On Main Street’. Not everyone shows the expected reaction, true. But time is a wonderful thing as most doubles become talismans and warm comfort zones as tastes change. You can draw your own conflicting opinions from the overall caboodle, and that is what makes life interesting rather than having it all mapped out. A maxim that Prince would approve of indefinitely.R

1 thought on “From The Crate: Prince – Sign ‘O’ The Times (Super Deluxe Edition)”