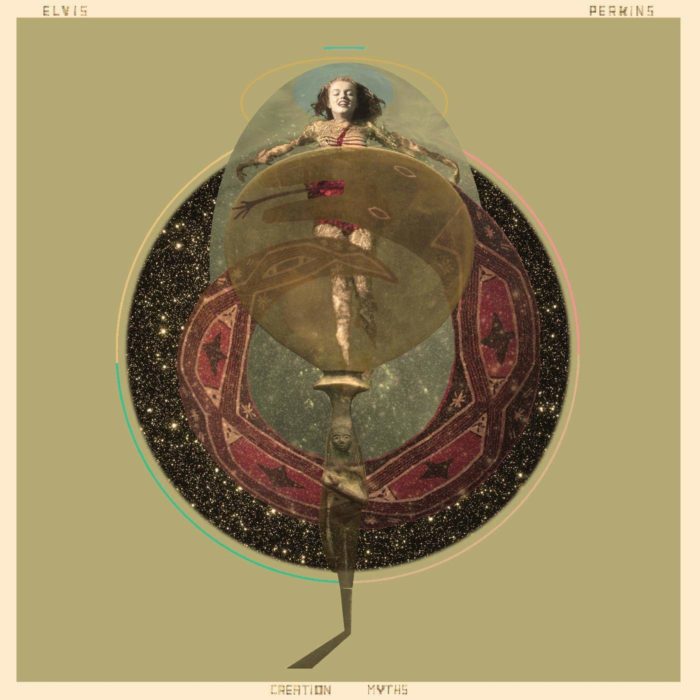 When revisiting the film Psycho sixty years after it was first shown on cinema screens around the world, certain parallels can be drawn with listening to Elvis Perkins’ new album Creation Myths. It is not so much the fact that the 44 year old American recording artist’s father famously played the part of Norman Bates in Hitchcock’s macabre horror movie but more the manner in which both experiences seek to cross that great divide between the past and present.

On Creation Myths, Elvis Perkins steps back in time to a bunch of songs some of which pre-date his 2006 debut album Ash Wednesday whilst the others are coeval with the tunes on that record. He speaks of “doubling back to gather and revive them”, and in doing so breathes fresh new life into songs that had previously existed only as four-track demos and rusty old live recordings. Talking about this process, Perkins says “I’ve carried them with me since their genesis, and I’ve always suspected that they would be documented at some point, but you never know when you’re gonna have that window, when it will finally feel like the right time.”

And with the unwitting opportunity afforded him by the Coronavirus pandemic here and now is the right time and place for Elvis Perkins and Creation Myths. Alongside Sam Cohen– artist, producer and founding member of Boston, Massachusetts guitar-pop band Apollo Sunshine – he first returned to these old songs before the two men were then joined by a wide range of friends including drummer Otto Hauser, American/Canadian singer-songwriter Vera Sola – who contributed vocals to ‘The Half Life’ – the Dap-Kings’ saxophonist Cochemea Gastelum, and country musician Tyler Wood. And together the assembled musicians achieve a state of collective self-unification by successfully transporting the younger Elvis Perkins into the present day.

Like Psycho before it Creation Myths is often unconventional by design, and also in keeping with the film it can hold mystery, imagination and an audience firmly in its grasp. The record achieves this by merging pop music with country, soul and gentle psychedelia. It conjoins Harry Nilsson with Townes Van Zandt as much as it does blending shades of the Menahan Street Band with those of The Beatles whilst offering us tantalising peepholes into not only an earlier incarnation of Elvis Perkins but also some of the more familiar touchstones of American life.