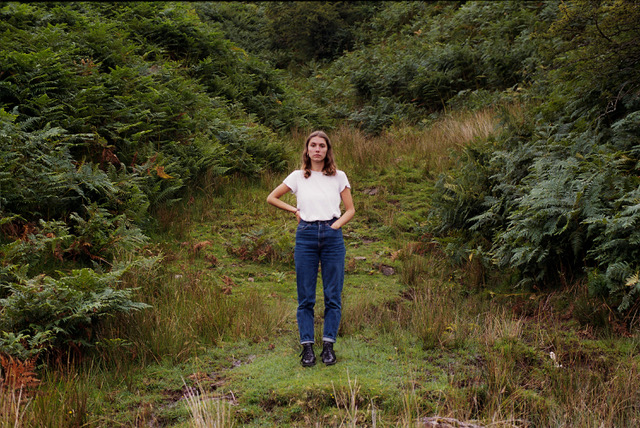 When Alisa Tully was a girl, she sang in the choir at her local church. She recalls fondly walking across the Welsh countryside to practice and perform there, to meet her father and her friends, taking in the world around her, relishing the voices of her community in and outside the church itself.

Absorbing the sounds and surroundings of nature and a church as a manmade construction. Such a simple thing, taking a walk. And yet.

She describes it all as a  “magical, ancient feeling” and for Ailsa the memories echo and influence her now as an adult, and inform her creativity as a musician and songwriter. Sounds as memories and in the form of field recordings blend with her affections for choral music bedded in at university, and electronic  and folk music, creating her musical world to birth the fantastic new single ‘Drive‘.

The song is a sophisticated, dreamy and thoughtful exploration of freedom and escape. What is it you’re hoping to escape from, Ailsa?

“I think it’s about escaping your day to day life. You have to do a lot of boring jobs to keep yourself especially at the stage I’m at and it feels monotonous and painful and you want sometimes to completely run away from everything, drive off. It’s almost as if you could drive away from your head as well,” she explains.

“If you’re anxious you want to physically leave. Driving felt like that kind of thing. I wanted to escape, I wanted to drive away and I think I just started driving again.”

She’s talking to me over the phone from her grandmother’s house in Monmouth, the second day of into lockdown number two across Wales.  The frustrations of the year’s stops and starts are universally felt but for Ailsa, 2020 unexpectedly has been a year of constructive change to compensate, in part at least.

In May she released the single ‘Edge’. On it we hear the energy and flow of a river and low, chatty voices as Ailsa sings over a gentle musical balm.  She refers to ‘Edge’ a lot. It altered so much for her, marked a creative sea change.

Listening to Ailsa’s earlier recordings and these two newer works, it’s obvious that her lyric writing has been on a journey of sorts itself. When younger her words were vague and unclear, she reckons. As if she shied away from the personal.

“They started off like, did I know what I was saying? NO. Did anyone else know? No! And I certainly didn’t. I was trying to work out what I was trying to say, I guess. It happened that naturally that it’s got more personal and less flowery I suppose. I’ve just ended up being more honest which I think works much better people relate more easily.”

Putting out ‘Edge’ distracted her from the fact all of her gigs had been cancelled, she jokes.

‘Edge’ came out on her own label Skivvy Records – named such to reflect women’s traditional roles of shouldering domestic labour – she runs with her guitarist Gillie. BBC Introducing’s Adam Walton played it on his BBC Radio Wales show on Saturday night. Matt Brown from Dalliance Recordings (Gia Margaret, Common Holly, Wilsen) heard it, got in touch and before she knew it, Ailsa found herself signed.

“I got very excited, jumped around the house a lot!’

Ailsa’s band are Gillie, and Heledd Owen on drums, the latter also of Welsh Music Prize 2019 winners Adwaith. She tells me how “endlessly inspired” she is by her band. It’s invaluable, she says, to be working with such creative, innovative musicians. She admits to only listening to female artists, in general. This is interesting to me, I say, as someone who restricts reading to books written by women.

“It’s almost subconscious for me. I don’t really think about it. I guess it’s relatability. I’m not all men are absolutely shocking at music, my personal listening it just gravitates. There’s an emotional level that I guess I completely understand.”

Ailsa studied Popular Music at Goldsmiths University in London. During her degree she concentrated on songwriting (“lots of songwriting”) but explored outside the conventional singer-songwriter set up and the choral element of her studies remains within her work today.

Her instrument at uni was the cello and the instrument makes its mark still, but not in a straightforward way. She’s had to get creative. Playing live shows with such a delicate instrument was too stressful and worrying for its health. She bought a cheap electric cello “that sounded like death” and “someone scratching the wall.”

So she moved over to playing the bass and giving it a cello tuning.

“That’s why my bass is completely ridiculous! (laughs) and I don’t really know what I play anymore. Certainly not a bass.”

Still reflecting on those walks to and from the church back home she had an interest in recording the world around her both in London and Wales.  Field recordings are a growing phenomenon – 6 Music‘s Cerys Matthews and  Welsh Language Album of the Year 2020 winner Ani Glass both have new albums with field recordings adding depth and circumstance.

Such recordings form an essential part of Tully’s work, made whilst wandering for miles near her parents home on the English/Welsh border.

“I wanted an excuse to do these really long walks! I think it was about getting out of your head more than anything for me. I’d go back and do 25 miles in the day and end up at this abbey that was ruined and try and record all the sounds along the way and read up a lot of the history and try to write reflectively about writing in situ and that’s where it started,” she explains.

“It was a good opportunity to bring something more interesting into my own music like how to combine these worlds. ‘Edge’ was the first time I did that and it felt like it set the scene for me. Because it was so much about a place. It wasn’t about Wales, it was King’s Cross, all the sounds you experience when you were there. It made me feel quite reflectively about the space you have in all of your songs.”

“London built a sense of community,” she adds thoughtfully. “And the musicians at Goldsmiths but Wales I have to come back every so often. There’s something I gain by bring from here that I kind of need.”

‘Drive‘ is out now via Dalliance Recordings.