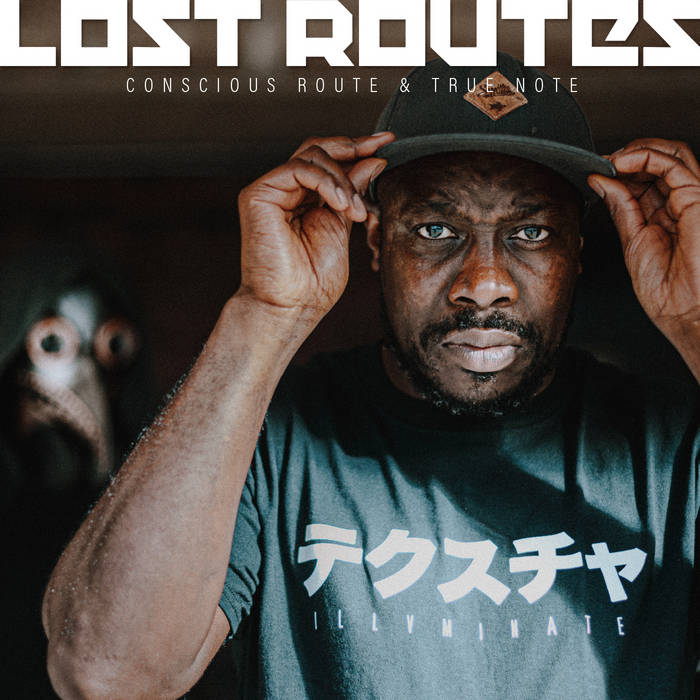 For the best past of a decade Conscious Route has been spitting rhymes and bearing his soul. The results have been patchy but one thing that was always certain was his talent. Now on his debut album, Lost Routes, with beatmaker True Notes it all appears to be coming together. This is an album in which Conscious Route discusses his youth, days at uni, the difficulties of being PoC in 2020 and how, when things are at their bleakest, you have to find the positives and small wins.

After a pedestrian opening the album comes alive with ‘Brothers’. This is the track in which you can start hearing how all Conscious Route’s hype, and praise, is coming to fruition. ‘Brothers’ is the standout track which discusses the history of black culture and where it can go from there. It’s pretty verbose stuff with a great backing track. ‘Dusty Days’ feels like a Magnetic Man track. Huge basslines and skittering beats. The change in pace is also music needed as everything so far has been at a lower tempo. ‘Dem Days’ is a fantastic autobiographical story about how music saved Conscious Route’s life as a teenager and gave him purpose when nothing else did. It’s really interesting how he discusses moving away for uni and all the fun and heartache that can bring. When uni is mentioned in music, especially Hip-Hop, it’s either used as a punchline for a certain type of person or as something you do while working out what you want to do. Here, it is used as something that is a positive experience.

The problem with Lost Routes is that there is little variation between the songs. True Note’s beats are slick and entertaining, but a bit samey. Yes, Conscious Route’s vocals sound awesome. His flow isn’t at the speed of Ocean Wisdom and the lyrically imagery he creates is clever, but after a few tracks it all starts to merge into one. Neither artist is recreating the wheel, why should they, but there isn’t anything here that we haven’t heard before. Lost Routes feels longer than it is, weirdly. 20 tracks in 55-minutes isn’t that long and it’s nowhere the length of say, Wu-Tang Forever, but it manages to feel longer. Another fact is the number of skits. Over a quarter of the album is made up of skits. They very rarely add anything to the album yet ‘Lost Routes’ has six of them. This is a shame as they break up any momentum the music has built. After ‘Awakening’ you need to visceral punch of ‘Brothers’ but there is a lag. ‘The N’ Word’ is an interesting skit but it really affects the flow of the album. This is sadly repeated throughout the album. What makes all this worse is that Lost Routes is a genuinely fun album. The beats have a proper swagger to their step and Conscious Route’s rhymes are insightful and entertaining, but those skits act like speedbumps while driving along a seafront. It gives you an extended view of the sea but the constant jolting with brakes is a bit jarring. Hopefully, these issues will be sorted on his follow up, as we are finally starting to see the definite article that has been hinted at for so long.