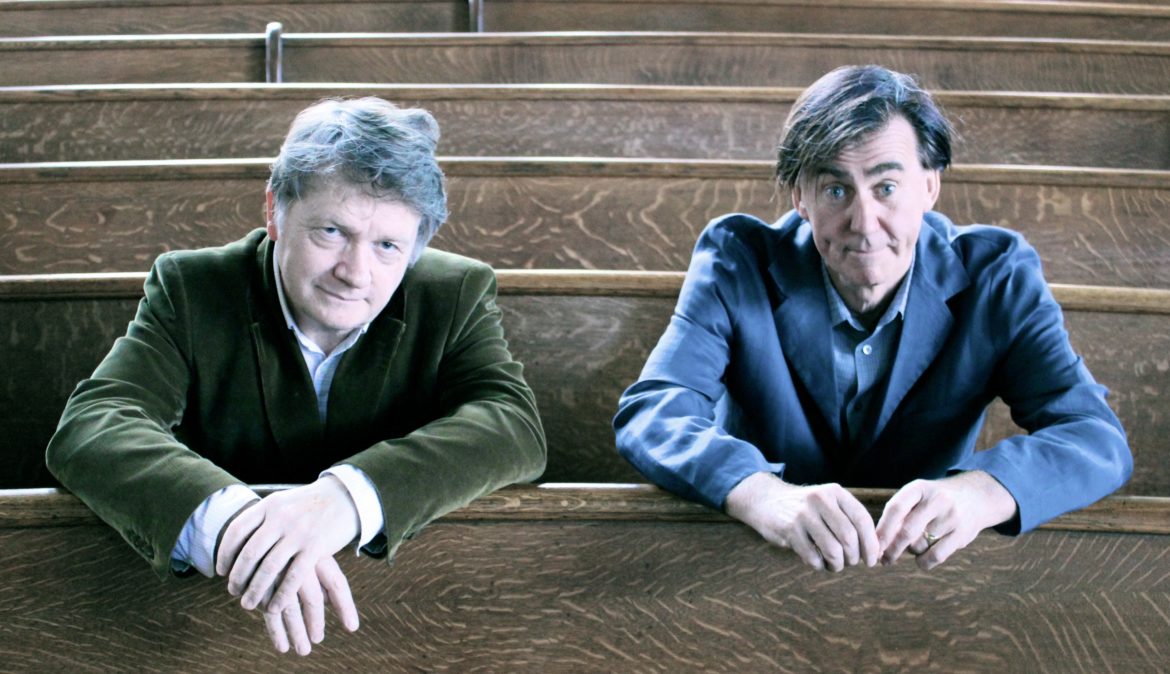 It’s Immaterial have just released their first new album in 30 years, and 34 years after the much-loved hit ‘Driving Away From Home (Jim’s Tune)’ threw them into the limelight. House For Sale is the group’s third album and follows the stately perfection of 1990’s Song and 1986’s hit debut Life’s Hard And Then You Die.

God Is In The TV caught up with John Campbell (the band’s singer and one half of the band alongside Jarvis Whitehead) to chat about the new record and life in general.

It’s been quite a journey in getting the new album House For Sale into the world, you must be pleased with the reaction now it’s out there?

Yes it’s been a long and quite often difficult journey for all kinds of reasons, from health issues through to the collapse of Pledge music and having to find ways to refinance the project and honour the pledge. So after all that, I’m extremely pleased with the possitive reviews and way it’s been received. I’m also thankful for the patience and tenacity of all those who have supported the project.

The album had become something of a holy grail for fans of the band, had you come close to releasing it in the intervening years between its recording and now?

The short answer is no, not really. All the songs for House For Sale were written in the early nineties, it was intended to be a third album released within two to three years of Song but life got in the way. Calum Malcolm who produced Song invited us up to his Castlesound studio in East Fife Scotland to make the demonstration recordings for House For Sale, he had been asked to review a new digital eight track recorder called the Tascam DX-88 for some industry magazine and thought it would be an opportunity to start a third album. Jarvis and I arrived in Scotland with the ideas for the ten tracks for the album and Calum had four DX-88 machines slaved together making a 32 track recorder. We worked for just over a week laying down ideas until we had the bones of each track before returning to Liverpool. On returning to Liverpool, I had the distressing news of my life partner’s diagnosis with breast cancer, she died some eighteen months later, as you can imagine it was a difficult time for me so the album was put on hold. Jarvis and I carried on working together on many different projects such as music for radio plays and theatre, Jarvis ran his music school and I got invited to teach at Liverpool School of Art (the art school I attended) running a sound art course and the album seemed to just fade into the background. About six or so years ago Jarvis and I were moving our sixteen track studio to new premises when we came across a box containing the DX-88 tapes from Scotland and decided to complete the album as we intended all those years ago. DX-88 machines had come and gone by now so I had to track one down so we could transfer the material to Pro Tools sessions, we had to rebuild a lot of the tracks that had digitally deteriorated over the years and write and record new parts to complete the songs. We did all this between other commitments and finally when into Elevator studio here in Liverpool to mix and master and then blow me, the coronavirus. Things just happen.

You’d already been releasing singles for a few years when Driving Away From Home became a big hit: what was it like being thrown into the mainstream, Top Of The Pops world in that way? Do you have good memories from those times?

We were still recording the Life’s Hard And Then You Die album when the record company took the decision to release ‘Driving Away From Home’ as a single. I can remember the long days and nights in the studio and on one of those evening the A&R man, Ross Stapleton, came in and told us after the first week the record had gone into the thirties and was receiving strong radio play. It was exciting – the world seemed to speed up that week, I remember being in a cafe in Notting Hill, eating breakfast with the record on the radio and not knowing where to look. In the next chart it had risen to eighteen and we had being given a Top Of The Pops slot. The next week the record had risen to eighteen and we were on the Terry Wogan show (remember that?) There was a payphone backstage and I rang my Mother, she told me she was watching the Wogan show. I told her we were next up and she nearly fainted! Then suddenly it all came to a shuddering halt, with the record still receiving over twenty BBC radio plays a week and demand high the record label fluffed it’s lines and overlooked repressing. So with all that support we simply ran out of records to sell and missed the boat.

Did you expect the song to be a hit or did it come as a surprise?

No, I didn’t expect it to be the hit it was though I thought it would do well, it had a certain unique charm and a strong rhythm but it just ran away so quickly, it caught some kind of mood at the time. It was supposed to be a taster for the album the A&R chap at the record company thought ‘Ed’s Funky Diner’ was the better chance of a hit single. ‘Driving Away From Home’ still racks up the radio plays to this day.

Were there any other artists or bands around at that sort of time that you felt a kinship with, or got on particularly well with?

Our management company was called Eternal and based in Liverpool. Pete Fulwell whose company it was also managed other bands Wah! Heat (later Wah! and The Mighty Wah!) and Black, both of whom had hits, so we were part of this stable of acts under Pete’s wing. Colin Vearncombe of Black died in a crash a couple of years back and is still missed, but I see Pete Wylie of Wah! Heat – he lives just across the park from me. Other then the stable mates, I suppose Talk Talk had the most appeal for me.

Did you have control over the other choices for singles from the first album? Ed’s Funky Diner still sounds like a Number One all the way to me!

Not really, the campaign for Life’s Hard… was driven by Ross Stapleton at Siren records, who is still a good friend to this day – he had worked previously with likes of Human League and Simple Minds, so he knew what he was doing. Altogether I think four singles were released including ‘Ed’s Funky Diner’ – it was a disappointment to us when that single stalled, it was unexpected. The other two, ‘Rope’ and ‘Space’ had varying degrees of success in different territories. I remember ‘Space’ doing well in Italy of all places.

Although a four year gap is commonplace with albums these days, that was quite a gap between the debut in 1986 and 1990’s Song. Was there any reason for that or any story there?

It was quite a gap, when we came out of the studio after recording Life’s Hard… The company wanted us to do a European promotional tour but at the time It’s Immaterial was just Jarvis and I, so we had to recruit and rehearse a band. The first tour was booked and then pulled when Virgin International (Siren was a satellite label) decided we should do a joint headlining tour with the Virgin France band Les Rita Mitsouko so the tour was rescheduled and just about to start when Jarvis and I were interviewed in Paris and when asked about the work of Les Rita Mitsouko and honestly rather than diplomatically said they were good but not our cup of tea, to wit they pulled out of the tour and the whole thing had to be booked for a third ridiculous time.

Eventually the tour went ahead and a second British tour, so it wasn’t until the back of 1988 that we got back into our 16 track studio to write once again (besides scraps during the tour). In early 1989 we moved up to North Berwick in Scotland and began work with Calum Malcolm at his Castlesound studio on what became Song.

How did you feel that Song was received at the time? It’s become quite a cult album over the years.

Song received little or no promotion at the time of it’s release which was disappointing, considering the time and effort it had taken to create. One single Heaven Knows and one video New Brighton. It was probably the last if not one of the last releases on Siren records. Richard Branson was restructuring Virgin at that time and had decided to concentrate more on the travel/airline side of the business, one of the casualties in this move was the winding up of Siren Records. Song disappeared, terrible timing for us.

How do you feel about streaming? I notice that the new album and Song are absent from Spotify and AppleMusic for instance, was that a decision that you made or is it down to the publishers / record company?

It was a decision we made, it’s a market place I know little about and one I’ve never used. So to simplify things and keep charity we decided to go with a one stop policy. Tim Bowness and Pete at Burning Shed have supported us and encouraged a release for a long time so it’s a good marriage.

How do you like to consume music personally? Do you go for vinyl, CD or listen online?

I go for CD mainly. I have vinyl and listen that way when I’m interested in the artwork as part of the experience. I listen to Radio – BBC2, BBC3 and BBC6. I very rarely listen online.

Is there anything new that you are enjoying listening to at the moment? Any favourite current artists?

I’m enjoying Bobby Womack at the moment, listening to my old vinyl too! I keep going back to play his track​​​​​​​ “Daylight” it captures a moment in the seventies.

And what would you say, if you had to choose one, is the best song ever written? All time favourite artist?

Too many, but I always go back to early Al Green, Willie Mitchell’s Hi recordings, I love the sound. Since buying the record as a teen I still regularly listen to Sly and the Family Stone’s Family Affair, ​​​​​​​so it must be good.

Can we expect another new album in the future? And would you ever consider rounding up the early singles into a compilation?

There are a lot of recordings that have escaped via bootlegging that I would not mind packaging together with notes and lyrics etc. Jarvis and I have a lot of material we’ve recorded and we still like making music together after all these years, so I’d like to think there’ll be a new album or something and we do take time!

House For Sale is out now via the band’s own It’s Immaterial label.