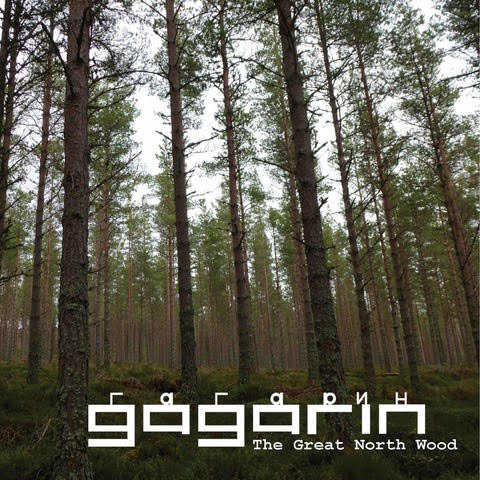 The name Gagarin – after the first human to enter space, Russian cosmonaut Yuri Gagarin – is a fairly apt one in the case of Graham Dowdall. As the drummer in 80s experimental punks Ludus as well as, since then, collaborating with the iconic Nico and joining legendary group Pere Ubu, he can certainly claim to have trod where precious few men or women have been before, in creative terms at least.

His work as Gagarin, however, is not so obviously off the wall or outsider-ish. Its appeal lies, rather, in breathing life and oodles of character into what can sometimes be quite a blank, featureless area of music, namely freeform electronica. The nine tracks that form The Great North Wood are, on first listen, the kind of electronica that listeners to Warp or Skam will be quite familiar with, perhaps with a hint of the darker, more eerie worlds of Coil or Nurse With Wound.

But, rather like any wood, not least the Great North Wood in erm, South London that inspired this LP, when you allow yourself to get drawn in, what seemed like familiar territory can somehow, suddenly, take on a different perspective altogether. The nine tracks here certainly do not show their hands straight away, starting tentatively with a note here and a chord there, then begin winding you in like a fish on a hook.

These are fairly amorphous, floating electronic arrangements, but as you’d expect from a drummer, rhythm still plays a big part. ‘SouthLondonCommons’ , the album’s opener, announces its arrival with widescreen oozing synths but hits a frisky arpeggio half way through and carries you along with it, off kilter kick drums and splintered hi-hats joining the fun along with eerie one note drones.

‘Hog’s Back’ is built around a slow motion, digital dub beat, the tense synth textures swirling up around it and eventually enveloping it. ‘Panceat’ uses jazz-inspired, Detroit techno-shaped keyboard chords to work its magic, like droplets of crystalline rain falling through the gaps in heavy foliage, slowly getting more and more caustic as they go on.

More precipitation awaits us on ‘Green Air’, which marks the album’s end, a field recording of a sudden downpour sweetened by birdsong and uplifting, stirring synth pads swaddled, nuzzled almost, by gently woven keyboard motifs In short, it’s a meditational masterpiece, achieving the trick of seeming stationary and caught in time but slowly and gradually regenerating itself.

For an album by such a space-related name, The Great North Wood is actually wonderfully earthy, a heartfelt and musically moving, if abstract, reaction to the wonder of nature. Hard enough to achieve in any form, but using the often stone cold technology of electronica to create such warmth and personality, quite the feat. Recommended.